You are here: Home1 / China 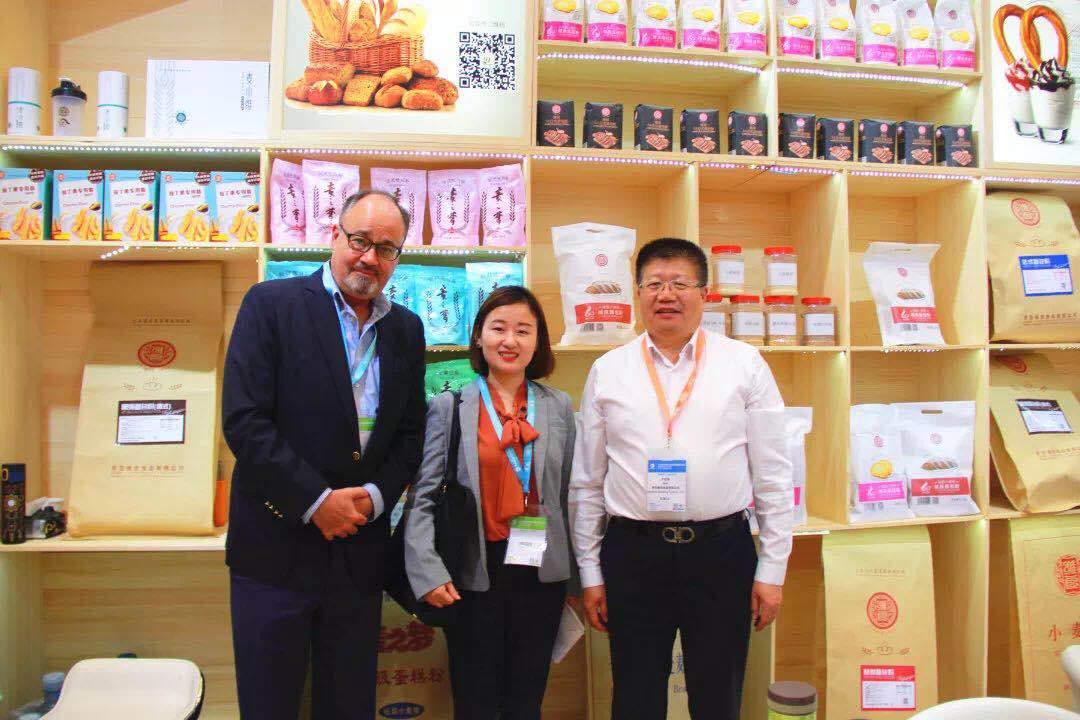 It is certainly true that the trade relations between the United States and China have been and remain in a difficult place. However, USDA Foreign Agricultural Service cooperator U.S. Wheat Associates (USW) is confident that this trade confrontation will one day be resolved. After many years investing funding from the Market Access Program (MAP) and Foreign Market Development (FMD) program, USW remains engaged in keeping our once and future wheat importing customers in China informed about the quality, variety and value of U.S. wheat in anticipation of future opportunities.

USW maintains a presence in Beijing but did not replace a retired colleague to help hold the line on FMD investment. Trade service visits in the first six months of 2019 confirm that private flour millers want to continue importing U.S. hard red spring (HRS) and soft white (SW) when the tariff conflict is resolved. The only flour miller who purchased any U.S. wheat in marketing year 2018/19 was willing to pay the 25% punitive tariff and took delivery of 43,000 metric tons of HRS in April. He expressed an abiding interest in the functionality, flavor and good milling characteristic of U.S. wheat, and holds high hopes for not just a “normal” trading relationship, but one that allow mills like his to run much more of it.

USW representatives also conducted trade service visits with customers attending Bakery China Shanghai 2019. They participated in a U.S. agricultural product showcase sponsored by the USDA/FAS Agricultural Trade Officer posted in Shanghai to highlight the differential advantages of U.S. HRS and other classes of wheat. USW Regional Vice President Jeff Coey reported that every customer was eager to regain access to the high-quality U.S. wheat they learned about through export development programs and experience over the years.

In addition, officials were happy to hear that USW’s commitment to the China market remains unchanged.  In fact, USW told the officials it intends to increase its activities in partnership with FAS in part with funding from the Agricultural Trade Promotion (ATP) program to keep U.S. wheat top of mind among users and policy makers in China. Under ATP, for example, USW plans to hold a series of “Contracting for Wheat Value” courses in the United States for commercial and state wheat buyers over the next three years. Participants will be managers with direct wheat trade contacts that influence wheat purchasing in their organizations. After the courses, participants will get the chance to observe wheat breeding, farms, transportation, quality control and Federal Grain Inspection Service processes.

Given that China imported 1.6 million metric tons of U.S. HRS, SW and soft red winter (SRW) wheat in marketing year 2016/17 and more than 800,000 metric tons of U.S. wheat in 2017/18 before the retaliatory tariffs were implemented, potential demand will benefit farmers in the Pacific Northwest and Northern Plains. And, with funding from MAP, FMD and ATP, USW’s commitment to service in China will continue long after this trade conflict has ended. 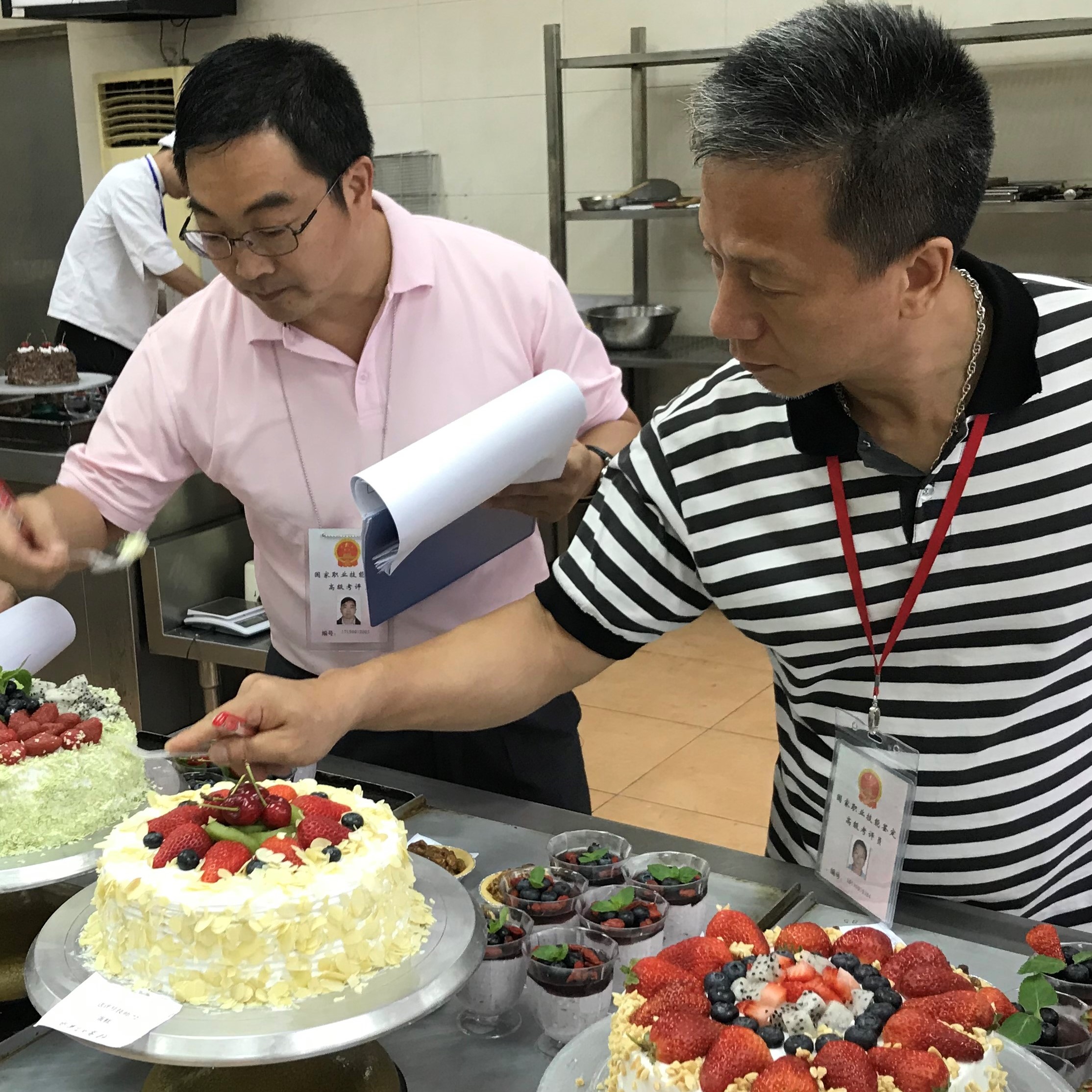 Cake and pastry consumption in the People’s Republic of China is growing but millers there struggle to produce the best flour for their customers. By leveraging expertise on its staff and working with public and private partners, USDA Foreign Agricultural Service cooperator U.S. Wheat Associates (USW) were increasing exports of soft white wheat to China for farmers in Washington state, Oregon and Idaho prior to the implementation of retaliatory tariffs.

Soft white (SW) wheat mills into excellent cake and pastry flour needed to meet growing Chinese demand. Chinese mills have some influence on what type of wheat may be imported and may import a limited amount of wheat privately. This supports USW using funding from the Market Access Program (MAP) and the Foreign Market Development (FMD) program to promote SW performance and help millers purchase it and mill it.

In June 2017, USW brought six executives from four Chinese flour mills to Portland, OR, to participate in a wheat procurement course and visits to the USDA-ARS Western Wheat Quality Laboratory in Pullman, WA, and SW breeding programs in the Pacific Northwest.

Also in 2017, USW and flour mill manufacturer Buhler teamed up to put on a week-long technical seminar focused on the milling of SW at Buhler’s location in Wuxi, Jiangsu province.  Peter Lloyd and Buhler experts addressed 16 managers from eight Chinese mills who all reported that the seminar addressed some of the unfamiliar challenges of milling SW.

That year, prior to the trade conflict with China, total U.S. wheat exports reached 1.6 MMT with returns of more than $330 million 2017/18 to wheat farmers and related industries in Washington, Oregon and Idaho. 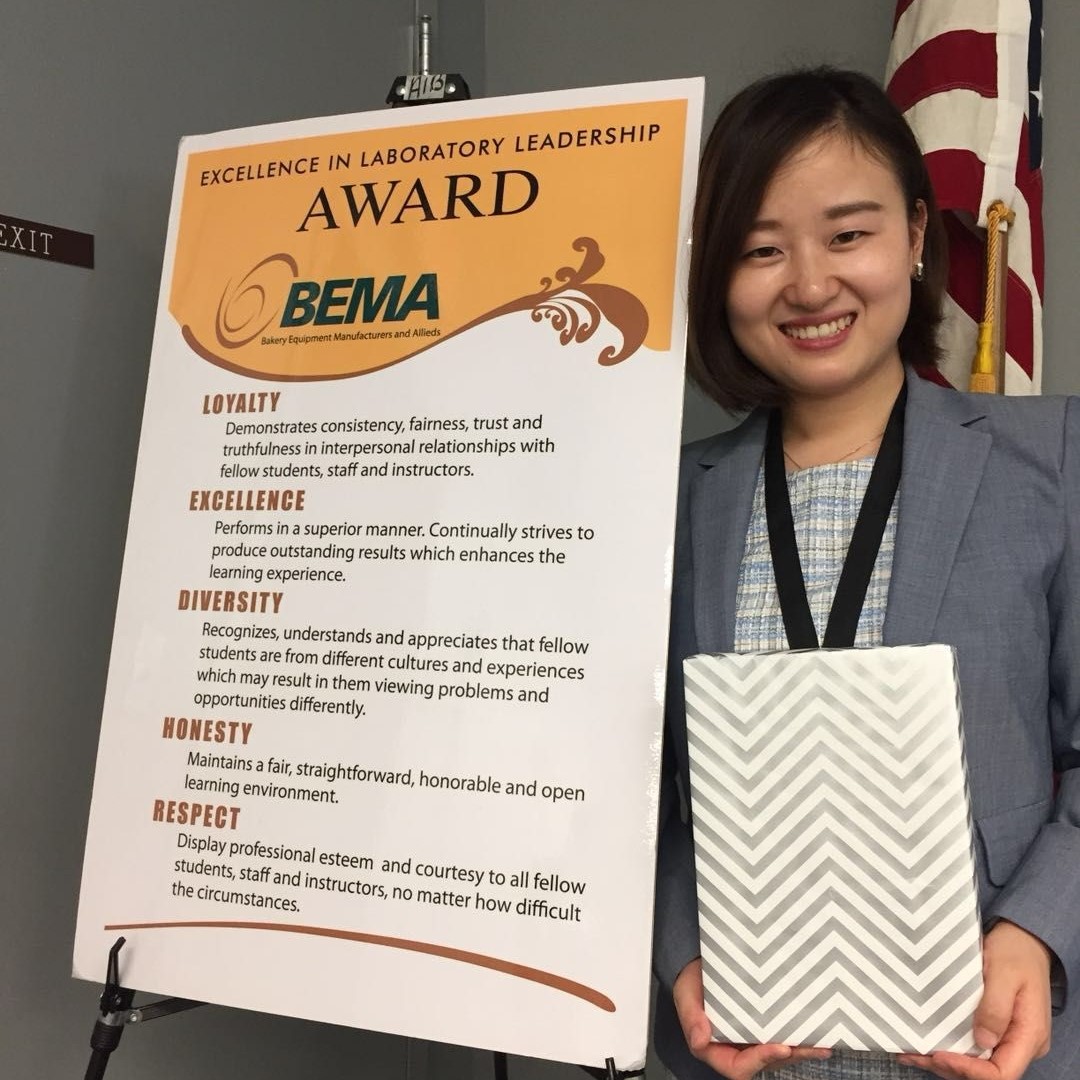 The popularity of non-traditional baked goods like chewy breads, cookies and fluffy cakes is rapidly growing in the People’s Republic of China. To help build a preference for flour from U.S. wheat classes among aspiring Chinese baking companies, USDA Foreign Agricultural Service cooperator U.S. Wheat Associates (USW) has expanded its technical capabilities through staffing and an exceptional training activity.

Because there is intense interest in professional baking expertise, especially in scaling up industrial sized operations, USW decided to invest some of its activities funding to send Dr. Liu to the 192nd Baking Science and Technology course at AIB International in Manhattan, Kan., from January through May 2018. This is an internationally respected, 16-week program combining science, hands-on lab work and baking tradition in its course work. With her expertise in food science and cereal chemistry, Dr. Liu was well prepared for this training — but she far exceeded expectations.

Dr. Liu represented herself, USW and the U.S. wheat farmers she represents with distinction, earning honors as the course’s top student and an “Excellence in Laboratory Leadership” award for her participation in the course. Now she will apply this advanced knowledge to effectively stress that flour which performs its intended functions enables Chinese bakers to produce higher quality, better tasting wheat foods, and that U.S. wheat flours are essential ingredients on which bakers can rely for consistent results.

Though China’s centrally planned food and trade policies create substantial barriers to export growth, the increased ability to train the industrial bakeries that must meet consumer demand is pulling in high protein U.S. hard red spring (HRS) and hard red winter (HRW) wheat for bread products and soft white (SW) for cakes and cookies. In marketing years 2016/17 and 2017/18, China imported an average of 843,000 metric tons (MT) of HRS, 163,000 MT of HRW and 318,000 MT of SW per year, valued at about $324 million per year for farmers and wheat supply participants in the Pacific Northwest and Northern Plains. 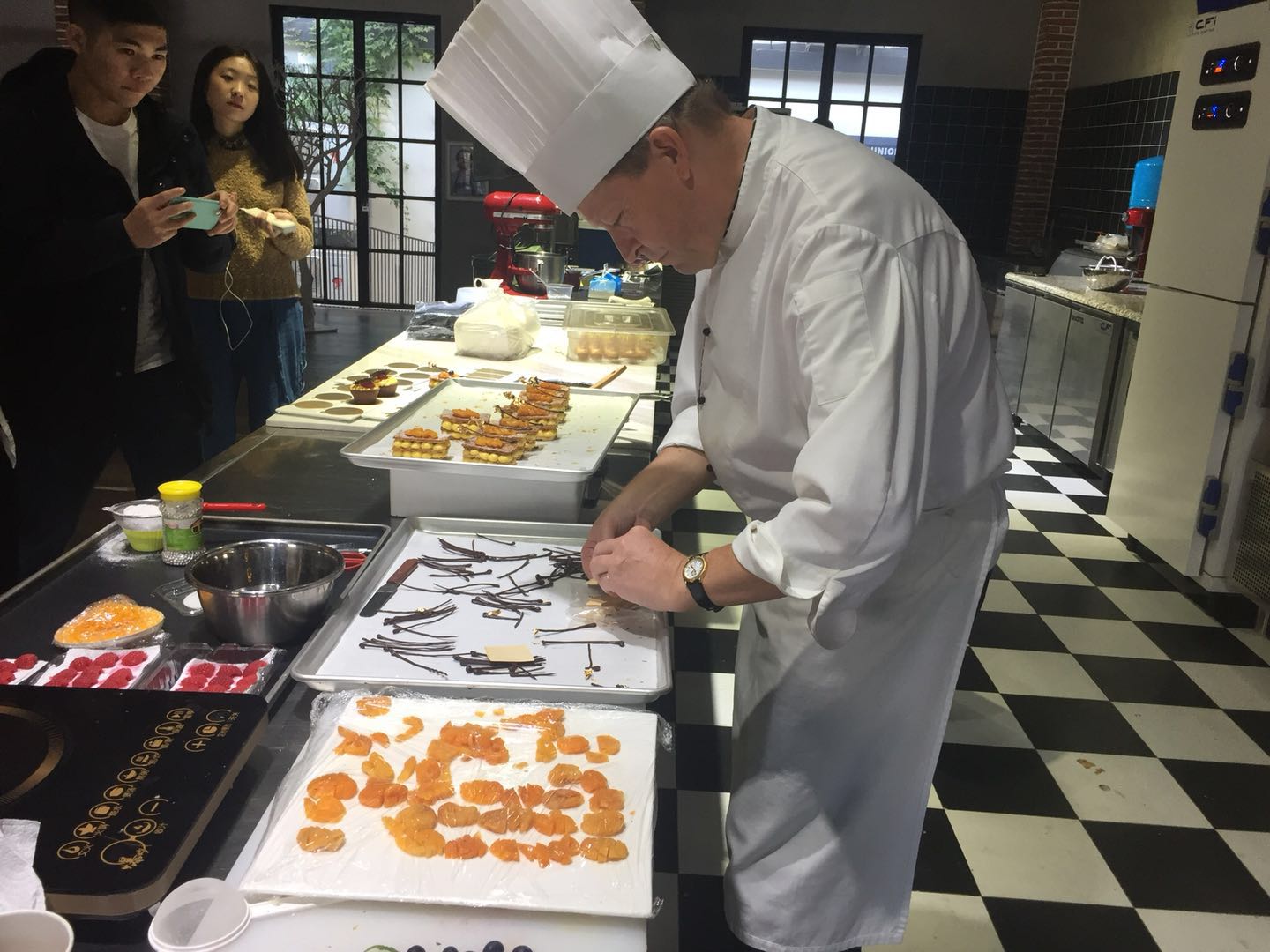 USW applied FMD funds to hire Dr. Ting Liu in September 2016 as Technical Specialist to bolster USW’s technical ability to demonstrate U.S. wheat performance qualities for new baked goods. One of Dr. Liu’s first projects, supported by MAP funds, was to help the Sino American Baking School (SABS) in Guangdong Province offer consultation to baking companies that have some experience using flour made from U.S. wheat. The long-term goal is to help them expand new specialty items such as sourdough, frozen dough and whole grain products. In marketing year 2016/17, three Chinese companies requested the technical assistance from senior specialists currently teaching at, or recently retired from, SABS. USW and SABS are strongly associated with excellent instruction and product development, so USW’s support is also helping build stronger reputations for both the school and for U.S. wheat.

China’s U.S. wheat imports can swing up or down with government policy decisions. However, total U.S. import volume doubled in 2016/17 to more than 1.6 million metric tons (MMT) compared to almost 880,000 MT in 2015/16. A closer look shows China’s annual import of HRS wheat grown in Minnesota, North Dakota, Montana and South Dakota has steadily increased the past five years from 475,000 MT in 2012/13 to more than 1.1 MMT in 2016/17. That is the second highest volume of HRS imports in the world that year. 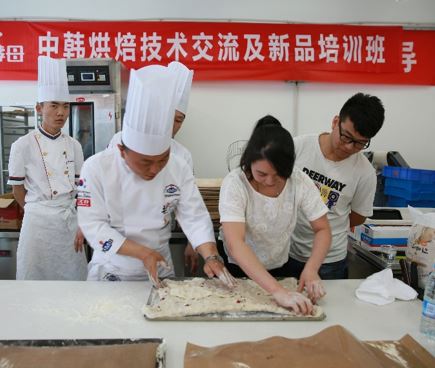 Individual Chinese flour mills may privately import wheat under the government’s tariff rate quota (TRQ). Yet buying in bulk is not economically viable for individual mills because their capacity is too small. To overcome this non-trade barrier, several mills can pool TRQ purchases through private trading companies. One of those traders is Nantong Yufeng Grains & Oils Co., Ltd., which had been a steady but relatively small customer for U.S. wheat since 2013. Initially the company was only able to purchase U.S. wheat in small volume containers.

Because this trading company was ready to expand its ability to purchase wheat in bulk for its Chinese flour mill customers, USW recognized that its people needed training in how to get the most value from its tenders for bulk loads of U.S. wheat. To do that, USW brought two of Nantong Yufeng’s traders and its mill customers to “Contracting for Wheat Value” workshops in the United States in August 2014 and June 2015. This activity, developed using MAP funds several years ago, helps wheat buyers better understand and use the inspection data created by Federal Grain Inspection Service as ships are loaded with U.S. wheat. In addition to the technical training, these workshops fostered deeper contacts with Pacific Northwest (PNW) exporters. In turn, this encouraged on-going communications between this buyer and U.S. sellers, a key basis of trust, understanding and a cooperative relationship.

When Nantong Yufeng expanded its ability to handle more efficient, lower cost bulk shipments of U.S. wheat in marketing year 2015/16, the training and new relationships came to fruition. With first-hand knowledge of quality, price and contracted value, the company chose U.S. HRS over Canadian supplies. It imported HRS in two Panamax vessel loads of 57,750 metric tons (MT) each for its Chinese milling customers.

When the first shipment arrived at port, though, Chinese customs officials unfamiliar with wheat inspection and contracting questioned the importer on “dockage” level and the term “deductible from contract value.” With the knowledge Nantong Yufeng gained from the USW seminars and additional assistance from USW Marketing Specialist Shirley Lu, the trader resolved the issue smoothly. In a subsequent purchase, USW suggested that Nantong Yufeng should specify a lower maximum dockage and there were no customs issues associated with this purchase.