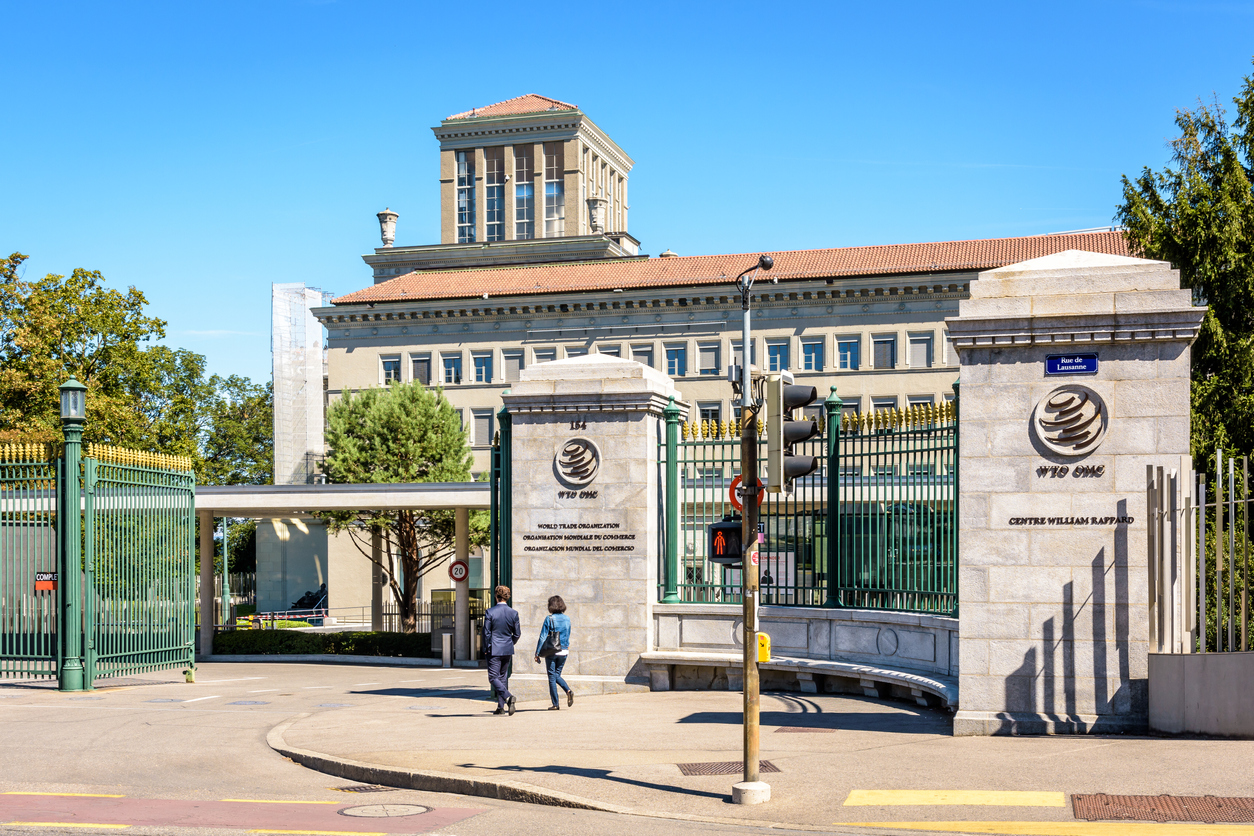 U.S. Wheat Associates (USW) actively seeks to bring down trade barriers or change policies that may prevent an overseas customer from choosing U.S. wheat. In most cases, these barriers violate a country’s commitments under the World Trade Organization (WTO) or a free trade agreement (FTA).

Every year, USW submits a report to the U.S. Trade Representative detailing these barriers. View the full report here.

Why are enforceable WTO disciplines important to wheat?

WTO reform is greatly needed to address many of the trade policy issues U.S. agriculture faces. USW and several other agricultural groups formed a coalition to highlight concerns to address at the WTO. The coalition is focused on dispute settlement, transparency, environment, sanitary and phytosanitary (SPS), technology and more. Addressing many of these issues will help trade flow more fairly and freely.

The WTO rules are the trade policy foundation, but significant gains can also be made by negotiating high-standard bilateral or plurilateral free trade agreements. Negotiations themselves are an opportunity to solve trade barriers, as are new commitments made once an agreement is reached. It should also be clear that USW does not see violations of trade agreements as reasons for abandoning or renegotiating agreements.

Traditional trade barriers, e.g., tariffs, are still among the biggest impediments to agricultural trade, even when imposed in full compliance with a country’s WTO commitments. The sections on this page will not include separate discussions on tariff barriers, but they are a significant problem for U.S. wheat exports in many parts of the world. Read more about this topic at:

Why are we concerned about certain kinds of domestic support (farm subsidies)?

Domestic subsidies that exceed WTO commitment levels encourage overproduction, eliminate trade opportunities, and lower global wheat prices, which reduce the incentive for farmers in the United States and elsewhere to grow wheat. The use of high support prices often results in surplus stocks, which sometimes become subsidized exports. Several wheat-producing countries—especially advanced developing countries—provide trade-distorting subsidies beyond their allowable commitments through input subsidies and market price supports. A 2015 econometric study and a China-specific follow-up study showed that these programs have substantially negative effects on U.S. wheat farmers. The U.S. challenge to China’s price support program at the WTO (DS511) was an essential first step in correcting this trend. More information can be found here and here.

Are regulatory measures related to health and the environment ever designed as trade barriers?

Sanitary and phytosanitary (SPS) regulatory standards worldwide concern U.S. Wheat Associates (USW) because they often disrupt trade. Since the conclusion of the Uruguay Round, which strengthened SPS rules and placed restrictions on the use of tariffs and quotas, importing countries have devoted more resources to developing and enforcing SPS regulations and implementing new food safety standards. In some instances, USW believes these SPS requirements are not based on sound science, do not use the least trade-distorting measures available, are based on misconceptions, and are motivated by purposes other than those allowed by the SPS agreement.

Plant health regulations present some of the most intractable problems as some importing countries demand freedom from one or more pests that occur in the United States and may be present in wheat shipments. Plant health restrictions of most concern involve wheat diseases (most often fungal diseases) or weed seeds. It is critical to conduct scientific risk assessments to validate new regulations as they can potentially eliminate the United States as a supplier to markets that have been historical customers.

Residue and contaminant requirements are also increasing. Many, if not most, importers now have regulations concerning pesticide residue tolerances. Once those are in place, limits on mycotoxin and heavy metal (cadmium and lead) content often follow. U.S. wheat virtually always conforms to these requirements. Still, the spread of unnecessarily stringent regulatory approaches and the uncertainty of differing requirements (testing delays, false positives or uneven enforcement) can discourage trade.

How can rules on biotechnology and other plant breeding methods act as trade barriers?

Regulations limiting the import of commodities derived through biotechnology concern U.S. Wheat Associates (USW). While biotech wheat is not in commercial production in the United States, well-entrenched resistance to acceptance of commodities produced via biotechnology is a concern that inhibits progress toward the development of new biotech wheat varieties. The lack of standard tolerances for low-level presence can disrupt trade for commodities without commercial biotech varieties. USW fully supports the U.S. government’s efforts to ensure that trade regulations of commodities derived through biotechnology be based on scientific evidence.

Additionally, as the use of new plant breeding innovations increases, we must draw distinct regulatory lines between traditional biotechnology and other technologies that can result in new, improved varieties without the presence of foreign DNA. USW encourages the U.S. government to closely monitor regulatory discussions on this topic and ensure that these technologies are not automatically categorized by regulation as “biotechnology.” Read more about USW’s efforts on these issues here.

China’s current market price support for wheat exceeds international prices, leading to higher domestic support than allowed under the WTO. This resulted in China’s overproduction of wheat, to the point at which they hold about half of the global wheat stocks. China’s current policy displaces demand for U.S. wheat in this market.

Market price support is one of the most trade-distorting types of support because it relies on border controls and/or market interventions to prevent domestic prices from falling below the support level. Governments purchase wheat above market prices and then are unable to sell that wheat without incurring substantial losses. That is why China’s wheat stocks have grown to such extraordinary volumes.

The recently revised China tariff rate quota (TRQ) rules for importing wheat and other commodities are significant. In October 2019, China announced new regulations to import wheat and other agricultural goods. This announcement included goals for TRQ fill rates, eligibility for additional state trading enterprises to receive quota, and additional language on the reallocation of unused TRQ. These changes are aimed at bringing China into compliance with its WTO commitments.

In April 2019, the WTO’s dispute settlement body ruled that China was not administering their wheat, corn and rice TRQ’s in a “transparent, predictable, or fair” way. China established a TRQ of 9.64 million metric tons (MMT) for wheat when it joined the WTO in 2001. The TRQ has never been filled, “despite world wheat prices and market conditions conducive to doing so.”

China’s WTO accession agreement allowed 90% of the TRQ to be reserved for importation through government buyers or state trading enterprises (STEs). Only 10% was reserved for direct import by the private sector. The private sector portion of the TRQ is functioning well enough to be filled in recent years, partly because Chinese millers are trying to meet the growing demand for products that require flour from different wheat classes with better milling and baking characteristics than domestically produced wheat provides. However, China’s notifications to the WTO on TRQ usage admit an average fill rate of only 23%.

The facts also argue against potential claims that enforcing the TRQ agreement would threaten China’s food security. China produces more wheat each year than any other single country and currently holds an estimated 50% of the world’s wheat supplies. If China allowed its 9.64 million metric tons (MMT) wheat TRQ to fill, it would be the third-largest wheat importer in the world while still being more than 90% self-sufficient in wheat production. Opening the wheat TRQ would also allow private sector millers and food producers to import the types of wheat they say they need but cannot obtain, and the benefits would be passed on to China’s consumers.

Not all trade barriers are foreign. The United States has imposed an economic, commercial and financial embargo on Cuba since 1962. Exports of U.S. agricultural products, including wheat, have been allowed since 2001 under the Trade Sanctions Reform Act (TSRA). However, there have been no U.S. wheat exports since 2011 because travel and financing restrictions make it difficult to achieve a free flow of trade.

Cuba is the largest wheat market in the Caribbean and should be a natural buyer of U.S. wheat. Instead, all wheat imports come from our democratic allies in the European Union and Canada.

TRADE BARRIERS IN THE EUROPEAN UNION

The European Union (EU) increasingly approaches sanitary and phytosanitary (SPS)  regulations through a “hazard-based” approach: identifying potential hazards and banning them, regardless of the actual risk of exposure. Without science-based risk assessments that meet international standards, the EU risks disrupting trade in agricultural products and violating its WTO commitments. There is a substantial risk that the EU will choose to prohibit pesticide residues that, while subject to risk-based analysis in the United States are banned as hazards in the EU. This approach could seriously affect wheat sales in the most significant export market for U.S. durum wheat.

India maintains high support prices for wheat in violation of its WTO commitments, leading to excess production and inflated public stocks. In some years, stocks have grown so large that India has exported the subsidized wheat at discounted prices, a clear violation of WTO export subsidy rules. To make matters worse, India is constantly seeking to protect its trade-distorting stockholding program by preventing any multilateral trade agreements that try to bring the policy into compliance.

Essentially, India has tried to create a permanent loophole for certain types of price support programs associated with state-run stockpiling programs. These types of price supports can be highly trade-distorting, violating both WTO rules and the spirit of trade liberalization that the organization is meant to embody.

U.S. Wheat Associates (USW) does not object to India holding public stocks for food security. Public stockholding has always been included in the Agreement on Agriculture’s “Green Box” of non-trade distorting support. However, administered prices (i.e., price supports) should be appropriately notified, considering their potential to distort trade. There is no such restriction on purchases for public stocks using market prices, but that is not the type of program India operates.

Despite one of the highest tariff barriers on wheat globally (130% in recent years, though recently lowered to 45%), Turkey is the largest exporter of wheat flour by far. One may wonder how this could be since protected industries are typically not globally dominant. The answer is that Turkey uses a complicated system of domestic price supports, state purchases, and a system known as inward processing (IPS) that results in subsidized flour exports.

The inward processing policies encourage subsidized flour sales because flour exporters receive a certificate to import duty-free wheat when flour is exported. This system requires Turkish millers to export flour before receiving certificates, allowing equivalent wheat imports duty-free. WTO rules allow this type of system, but Turkey has an obligation under the WTO Agreement on Subsidies and Countervailing Measures to maintain a verification system related to the IPS use. It is supposed to track how much product is imported and exported under the system and check that exported wheat has the same characteristics and is the same kind of wheat exported under the IPS. There is no evidence of such a verification system. If Turkey does not maintain such a verification system, it violates WTO rules.

Turkish flour exports can be priced well below the market, displacing milling wheat exports from all origins. This negatively affects USW’s overseas customers because it undercuts flour mill profits, resulting in slower growth, tighter margins, or milling industries operating well below capacity or even closing mills.