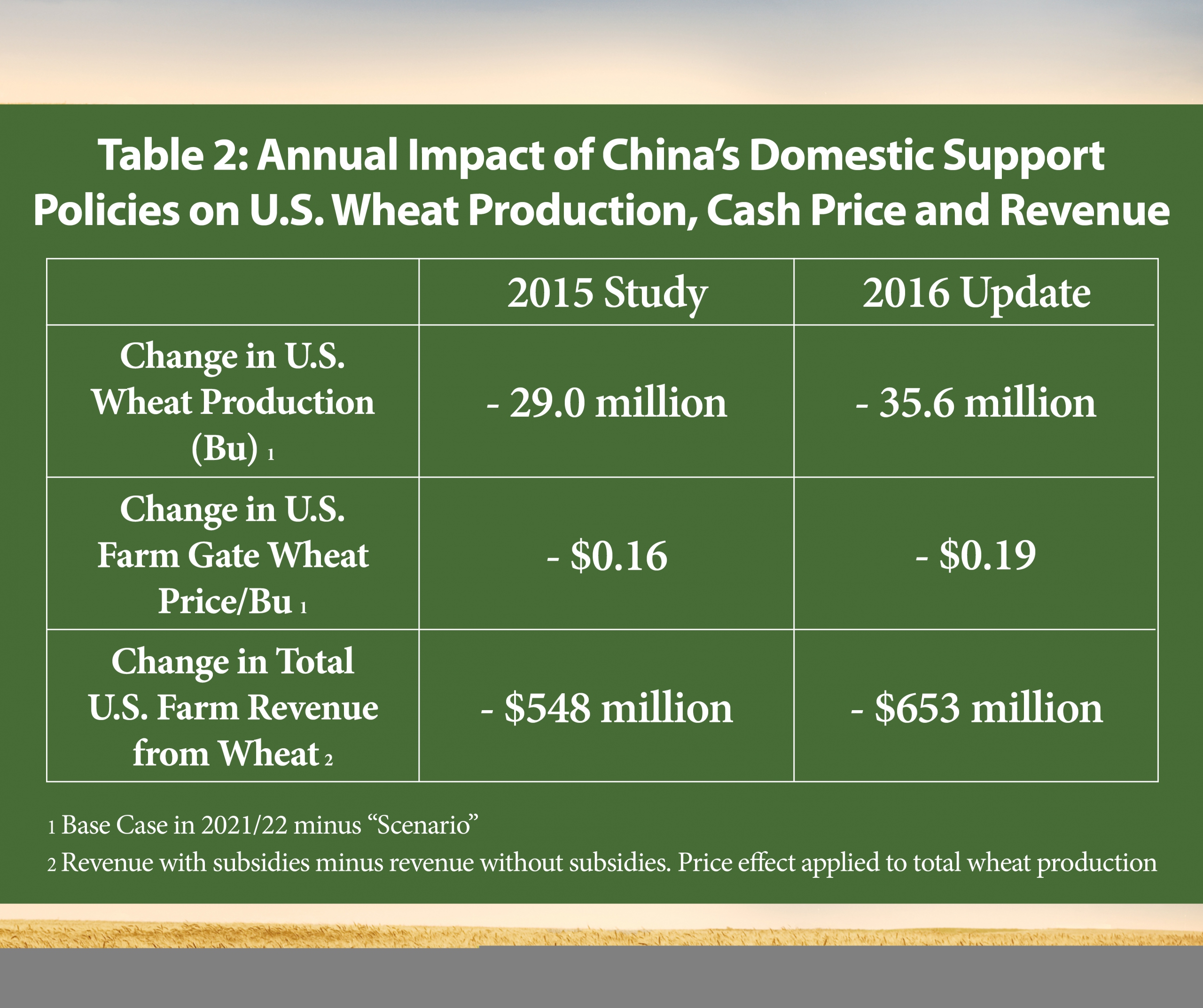 ARLINGTON, Virginia — Over the past few years, U.S. Wheat Associates (USW) and the National Association of Wheat Growers (NAWG) have demonstrated how the policies of a few advanced developing countries are distorting world wheat trade and hurting farmers in the United States and other wheat exporting countries. In 2015, an Iowa State University study sponsored by USW showed that China’s excessive wheat subsidies alone were costing U.S. farmers almost $550 million per year. Now, just one year later, a January 2016 update of the study demonstrated that the decline in world prices has increased the projected annual loss in U.S. wheat farm revenue from China’s policies by 16 percent to $653 million.

A 2014 study by DTB Associates showed that China effectively pays its farmers a minimum procurement price of more than $10 per bushel for wheat and subsidizes input costs. In wheat alone, China provides an aggregate measure of support (AMS) of at least $15.4 billion or 36 percent of the value of production, which far exceed the 8.5 percent de minimis limit set when it joined the World Trade Organization (WTO). China also agreed to allow wheat imports at a 1 percent tariff rate, up to a quota of 9.64 million metric tons. The out-of-quota tariff rate is 65 percent. China rarely administers this tariff rate quota (TRQ) as agreed and imports invariably fall far below the quota, even when its domestic prices are far above world market prices.

“Considering all the trade distorting policies U.S. farmers face in the world, the wheat subsidies in China and in other developing countries have the most serious effect on farm gate prices and trade flows,” said USW President Alan Tracy. “The studies we have sponsored clearly show the problem is growing more serious at the worst time for farmers who are already facing unprofitable prices.”

“We have seen prices collapse to unsustainable levels in just a few seasons, partially as a result of some of our trading partners not playing by the rules” said NAWG President Gordon Stoner, a wheat grower from Outlook, MT. “The decline in income of every wheat farmer in the United States will accelerate if China’s policies are not brought back into compliance with the commitments China’s government made to its trading partners.”

Noted Iowa State University agricultural economist Dr. Dermot Hayes conducted the 2015 study and the latest update. He said the results confirm that removing China’s domestic wheat support would have significant benefits for farmers in wheat exporting countries. The study used a proven econometric method to determine a world wheat “base case” including China’s current wheat input subsidies and price support. Researchers then removed the factors represented by China’s policies, ran the model again and compared the resulting scenario to the base case. Dr. Hayes said the results showed Chinese farmers over time would grow less wheat because domestic prices would fall and input costs would increase.

“In our comparison, China would need to increase its imports to more than 9.6 million metric tons per year, a volume that is about equal to the Chinese wheat tariff rate quota” said Dr. Hayes. “That would increase wheat exports and farm revenue in the United States, as well as in Europe, Canada and Australia (see Table 1). In the United States specifically, farm income from wheat would increase by $0.19 per bushel compared to the base scenario (see Table 2).”

“NAWG supports free trade and supports Congressional ratification of TPP,” said Stoner. “But trade agreements cannot meet their promise if other countries ignore the rules. It is time for the Administration to seek enforcement through the WTO.”

“Since these harmful policies are the acts of sovereign governments, our farmer organizations cannot battle them alone,” said Tracy. “At the direction of the USW and NAWG boards, we are working with the Office of the U.S. Trade Representative and USDA to develop a possible WTO challenge.”

USW and NAWG have posted the current update of the 2015 Iowa State study and the original study online at https://bit.ly/1XPLrLo and https://www.wheatworld.org/issues/trade/. For results of two DTB Associates studies measuring domestic support in advanced developing countries, visit www.dtbassociates.com/docs/DomesticSupportStudy11-2014.pdf and www.dtbassociates.com/docs/domesticsupportstudy.pdf. For a third party analysis of individual policy measures by country, visit https://www.oecd.org/tad/agricultural-policies/producerandconsumersupportestimatesdatabase.htm#country.

USW’s mission is to “develop, maintain, and expand international markets to enhance the profitability of U.S. wheat producers and their customers.” USW activities in more than 100 countries are made possible through producer checkoff dollars managed by 18 state wheat commissions and cost-share funding provided by USDA/Foreign Agricultural Service. USW maintains 17 offices strategically located around the world to help wheat buyers, millers, bakers, wheat food processors and government officials understand the quality, value and reliability of all six classes of U.S. wheat. For more information, visit our website at www.uswheat.org.

NAWG is a federation of 22 state wheat grower associations that works to represent the needs and interests of wheat producers before Congress and federal agencies. Based in Washington, DC, NAWG is grower-governed and grower-funded, and works in areas as diverse as federal farm policy, trade, environmental regulation, agricultural research and sustainability. 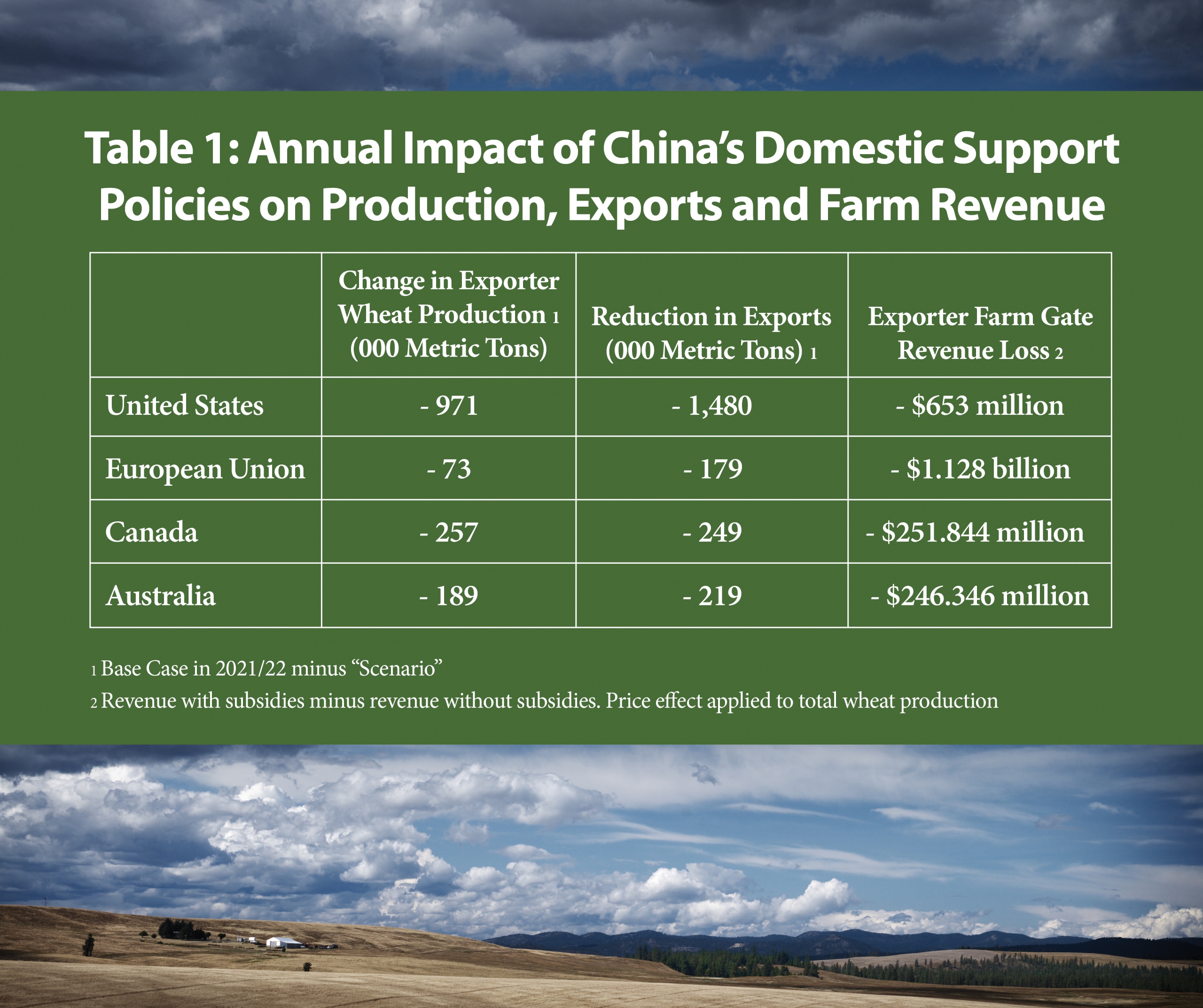