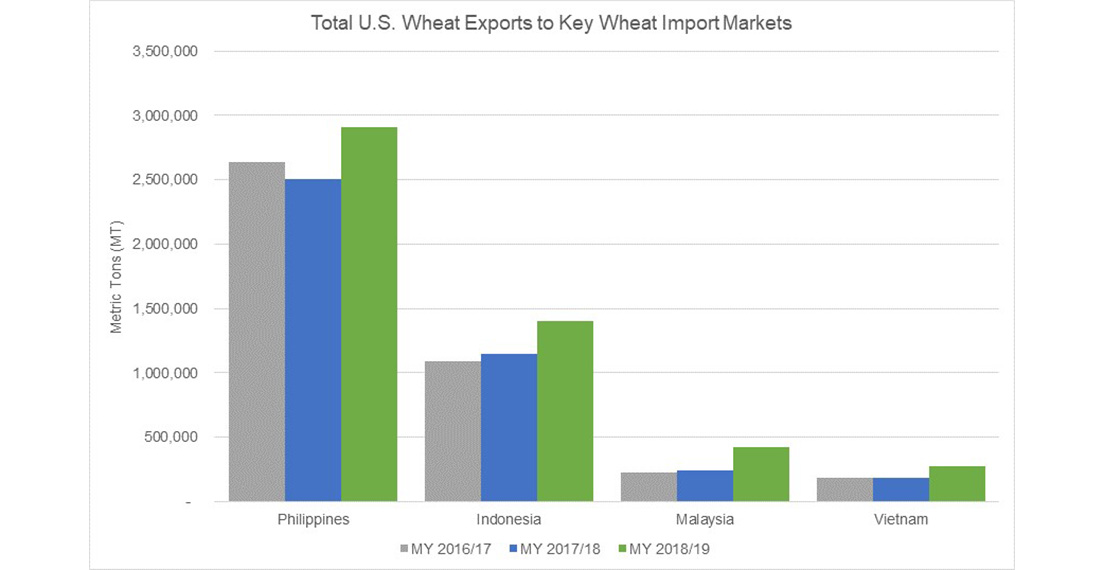 Prolonged drought has severely impacted Australia’s wheat production and, as a result, contributed to a significant shift in world wheat trade. If current weather conditions in Australia persist, U.S. Wheat Associates (USW) believes these export trends could continue through marketing year (MY) 2019/20 and beyond.

According to USDA data, in the five years leading up to drought conditions that started in 2017, Australia exported an average of 18.5 million metric tons (MMT) of wheat per year. In MY 2016/17, Australian wheat production reached a record 31.8 MMT and exports reached 22.6 MMT, their highest level since MY 2011/12 (a significant portion of this volume was wheat exported for animal feed). In MY 2017/18, however, reduced supplies led to a sharp fall in Australian wheat exports to 13.8 MMT. In MY 2018/19, exports fell again to 9.0 MMT after Australian wheat production declined to 17.3 MMT.

Australia produces white wheats that compete effectively in regional bread applications, but most significantly in South and North Asian noodle markets. Even though there is no single U.S. wheat class with optimal characteristics for fine Asian noodle products, over many years, USW has provided technical assistance to millers and noodle manufacturers on blending of U.S. wheat or flour to optimize noodle quality and compete with Australian noodle varieties. In addition, U.S. hard red spring (HRS) provides a competitive option for higher protein flour needed in many markets to meet expanding demand for loaf bread products and hamburger buns. 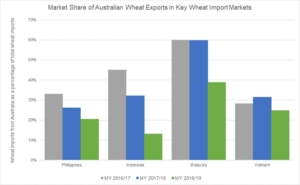 In MY 2019/20, USDA predicts Australian wheat production will rebound slightly to 21.0 MMT and exports are expected to increase to 12.5 MMT. Current USDA commercial sales data also show U.S. wheat exports to those four countries are ahead of last year’s pace.

U.S. farmers understand all too well the financial strain drought creates for their families and for end users of their wheat. Australian farmers must be concerned about whether their market share will rebound when the drought ends and supplies increase. That too is something U.S. wheat farmers, who have lost virtually all their market share in China under the current trade dispute, can understand. Market conditions change for all competitors. Ideally, that competition will continue to be carried out with the best interest of our shared customers and prospects in mind.

Latin America is facing great challenges, with extreme poverty and hunger being some of the…
END_OF_DOCUMENT_TOKEN_TO_BE_REPLACED
https://www.uswheat.org/wp-content/uploads/MOA-Logos.png 498 1157 Steve Mercer https://www.uswheat.org/wp-content/uploads/USW-Logo-Full-Color.png Steve Mercer2022-11-18 17:02:122022-11-18 17:02:12USW, Other U.S. Export Organizations to Collaborate in South America on Nutrition and Food Security Activities