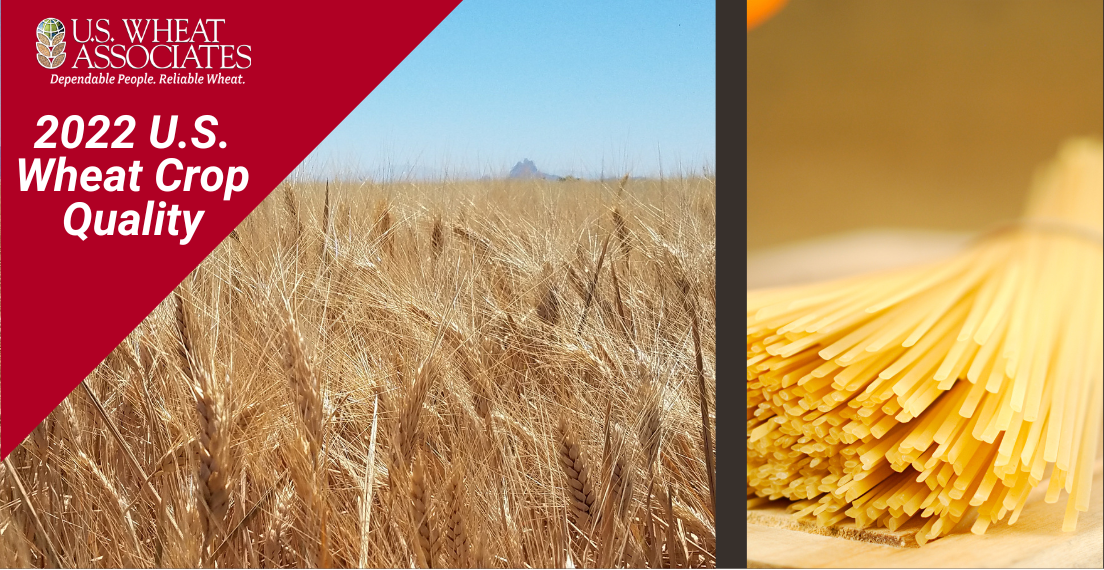 Buyers will find a larger supply of durum from the northern part of the United States in 2022. This high-quality crop boasts excellent grading and kernel characteristics and high falling numbers. Lower than average protein levels, along with pockets of lower 1000 kernel weights and smaller kernels, can be managed through diligent contract specifications. Dough properties look to be strong, as do cooked pasta characteristics. With high vitreous levels, low moisture, high test weights, little to no damage, sound kernel characteristics and high color scores, this crop will provide tremendous value to buyers.

DAMAGE was quite low at 0.1% due to minimal disease pressure; SHRUNKEN AND BROKEN KERNELS were at 1.0% with pockets of slightly higher levels due to dryness during kernel fill.

The average VITREOUS KERNEL (HVAC) content is 92%, higher than last year and five-year averages. Nearly two-thirds of the samples were above 90% HVAC, but pockets of the crop saw lower HVAC levels due to low protein levels.

PROTEIN averages 13.7% (12% mb), lower than last year’s drought-impacted crop, and is a result of above-average yields in parts of the region, as well as heat and moisture induced higher protein levels in other areas. Nearly 70% of the samples are above 13.0% protein.

The average 1000 KERNEL WEIGHT (TKW) is 40.4 g, slightly lower than last year. This year has a wider than normal distribution of 1000 kernel weights and kernel sizes across the growing region.

For the second year, KERNEL MOISTURE was lower (11.0%) than average due to a mostly dry harvest period.

FALLING NUMBER values are high, with the average being 433 seconds, with 99 percent of the crop above 300 seconds.

For a second consecutive year, DON is nearly non-existent in all production regions in 2022.

Wheat farmers in the northern part of the U.S. produced a larger durum crop in 2022. The U.S. Wheat Associates Crop Quality Report shows that this year’s crop has high vitreous levels, low moisture, high test weights, little to no damage, sound kernel characteristics and high color scores. Overall, durum is expected to provide tremendous value to buyers around the world.

LABORATORY MILLING for the 2022 survey was performed on a Quadromat® Junior mill, the same as the previous three years. Semolina extraction is 53.9%, indicating a reduction in extraction from last year; commercial mills are likely to see higher extraction values. Some adjustment for smaller kernel size and lighter 1000 kernel weight in portions of the crop may be required.

ASH is similar to last year at 0.64%, with SPECK COUNTS higher than last year but similar to the five-year average.

SEMOLINA PROTEIN is 12.0%, well below recent years due to lower kernel protein.

Similarly, GLUTEN INDEX values and WET GLUTEN are both lower.

SEMOLINA COLOR shows a notable improvement in the b value (yellow color) at 31.2, with similar brightness to the five-year average.

MIXING PROPERTIES reveal a slightly weaker crop, due in part to the lower protein content.