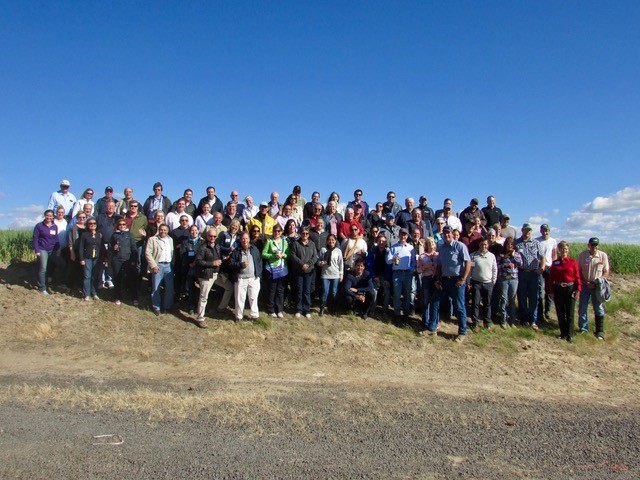 “How’s the weather up there?” That was Ric Pinca’s first question to Darren Padget when they met. At a height of six feet, eight inches (203 cm), Darren towers over Pinca’s five-foot, six-inch (168 cm) frame and most people that he meets. Pinca, the executive director of the Philippine Association of Flour Millers, recalls, “I couldn’t help but ask. But what has impressed me the most since then about this gentle giant is his passion for farming, commitment to his customers and a willingness to go the extra mile to resolve issues that affect the buyers of the grains he and fellow U.S. wheat farmers grow.” 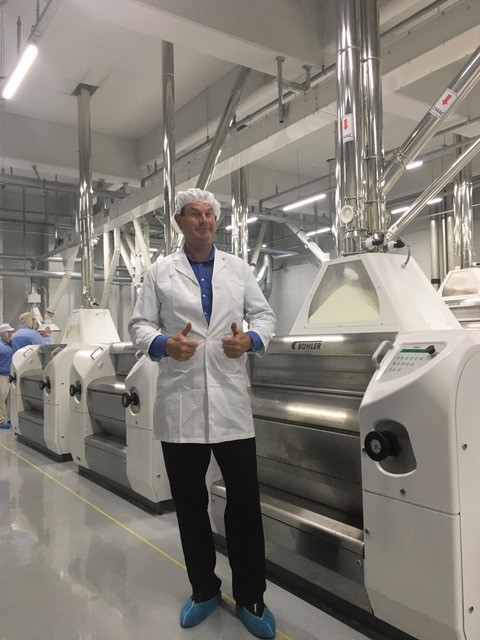 Pinca is just one of several U.S. wheat overseas customers that have visited Padget’s farm in Oregon’s Sherman County. Every year, U.S. Wheat Associates (USW) sponsors several trade delegations of overseas buyers, millers, bakers and government officials to visit the United States to learn about the U.S. grain marketing system and see how the wheat moves from the farm to the ports. Conveniently located two hours east of Portland, where many of the delegations visit because of its proximity to many stops along the supply chain, Padget’s farm has become a common destination. Over the past decade, he and his wife Brenda have hosted an estimated 25 groups, mostly from Asia and Latin America, including a large group from the 2016 Latin American and Caribbean Buyers Conference. 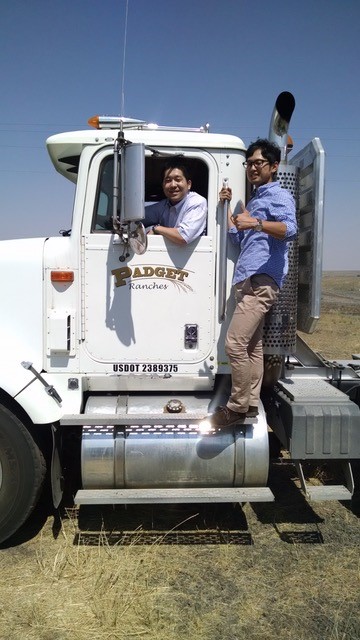 “Customers enjoy making a direct connection with the farmer because they really want to know where their food comes from and value learning about the personal commitment to high quality, safety and sustainability that U.S. farmers work toward,” said Steve Wirsching, USW Vice President and West Coast Office Director. “The support and involvement of our state wheat commissions with these delegations is a vital part of creating an eye-opening experience for them.”

A Day on the Farm

On the way out to the farm, trade delegations often visit an export facility in Portland before heading up the Columbia River to a barge loading terminal in The Dalles, Ore. During harvest, the delegations can see how soft white wheat from local farms is unloaded, separated by protein class and other quality characteristics, and loaded on barges for shipment to Portland. Next, they stop at the local cooperative seed plant where they are shown how the certified seed system works and how it helps maintain the high wheat quality that customers expect. Once they reach Padget Ranches, where their son Logan is the fifth generation, Darren shows them the equipment, the shop and repair facilities and eventually the wheat fields. He makes it a point to emphasize the role farm practices play in producing quality wheat. 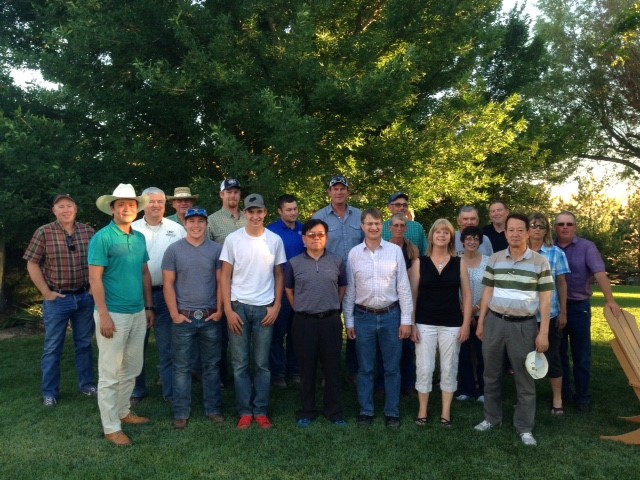 “When we first started hosting groups, I didn’t know what they wanted to see, so it’s been a learning curve for us to see what makes the biggest impact during their visit,” said Padget. “One way we have made a connection is through our GPS technology. Everyone has a smartphone, so even if you live in downtown Tokyo you understand that technology. So, we invite them up into the combine, turn on the autosteer and show them how we use that same technology for precision agriculture.”

Padget explains that some of the biggest “aha” moments are found in things that he takes for granted such as drinking water out of the yard hose, which comes from a well on the edge of the wheat field or taking in a view without buildings in the skyline.

“I was so surprised and impressed when I visited his farm,” said SW Yong, a purchasing manager with Daehan Flour Mills in Korea. “First by the farm size and second by his work. He tries hard to get better results for both yield and quality. We had an unforgettable experience when he let us operate his tractor and showed us how farm machinery has developed in the United States.” 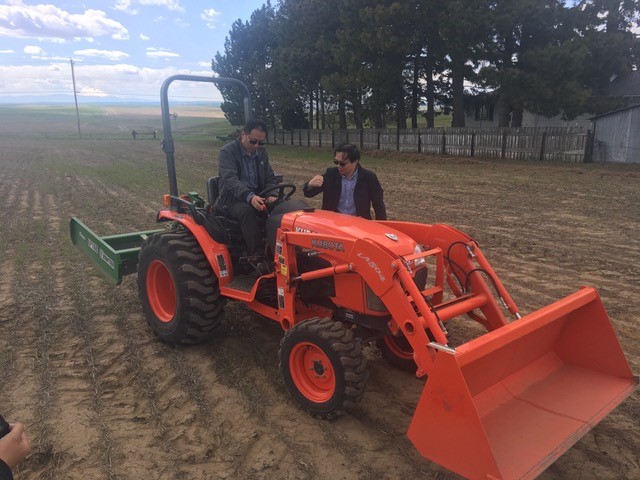 Joe Sowers, USW’s Regional Vice President for the Philippines and Korea, was one of the first USW staff members that Padget met with nearly 15 years ago to learn more about USW’s mission and the importance of developing relationships with overseas customers.

“Darren consistently goes well above and beyond the call of duty with trade delegations, generously offering his time and resources to host overseas guests at his farm on the Columbia Plateau above the John Day river,” said Sowers. “They get an up-close view of the spectacular Pacific Northwest terrain where the wheat they purchase is grown. Darren’s investment builds trust and respect with buyers while at the same time travellers are enjoying a once in a lifetime, magical experience in the beautiful surroundings of U.S. soft white wheat country.”

Padget started his involvement in wheat leadership with the Oregon Wheat Grower’s League and the National Association of Wheat Growers, before eventually joining the Oregon Wheat Commission. Currently, he serves on the USW Board of Directors as Secretary-Treasurer and is slated to serve as Chairman in 2020/21.

When he hosts trade delegations on his farm, Padget invites friends and neighboring farmers over for a barbeque, to bridge the gap between the farmer and the end-user. Padget says the involvement of his neighbors – who are always quick to lend a helping hand in preparing the meal – really makes the day unique.

“My goal is to show as many of my neighbors as I can what USW does for the farmer to build support for its activities,” said Padget. “They have really embraced the experience and do an excellent job of interacting with our guests. People take time away from busy days on the farm to be here.” 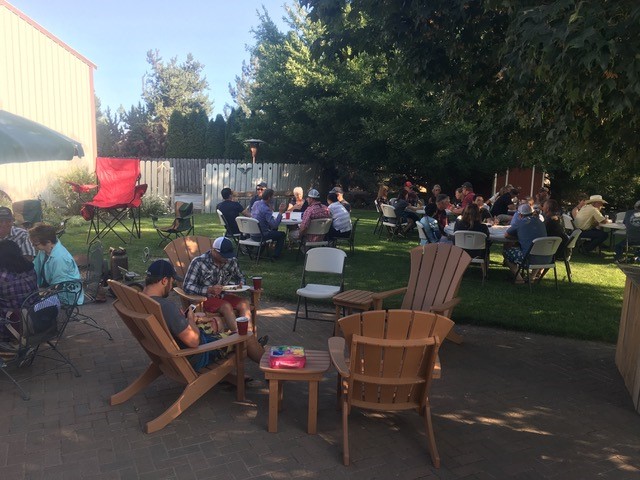 “My visit was an afternoon of fun and new friendships made as some of Darren’s neighbors joined in and brought more food than my tummy could hold,” said Pinca. “In Darren’s world, a neighbor is a fellow farmer who lives about 10 miles or more down the road. It was really nice of them to take time off from their farm chores just to meet us.”

Last summer, Padget and his neighbors started taking some of the visiting groups out on their boats on the Columbia River — a fun past time for their own families. 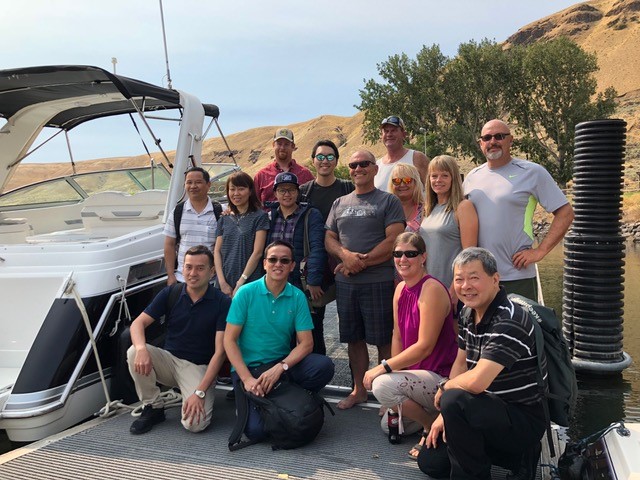 “When you are out on the water, we find that the conversations are different, even compared to when we are standing in the field,” said Padget. “When a barge goes by and you also have a railway on both sides of the river, the wheat is moving right past them and odds are some of that grain is destined for them. One guest from Singapore told us that she never imagined herself dangling her feet in the water off the side of a boat. That was an eye-opening comment for us on the value of our natural resources. These boat rides have created an intimate setting where you learn a lot more from each other.” 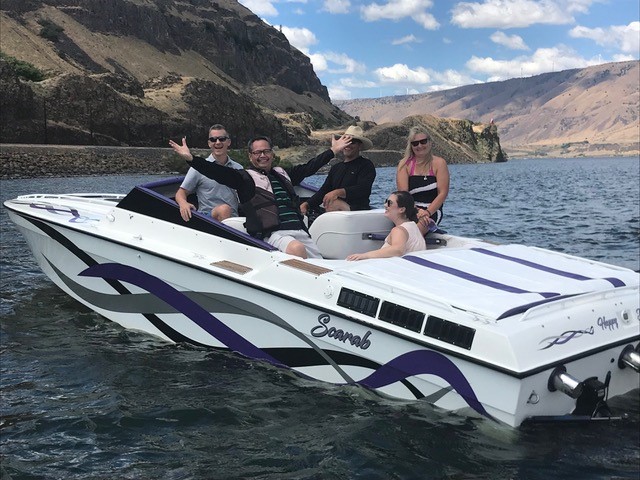 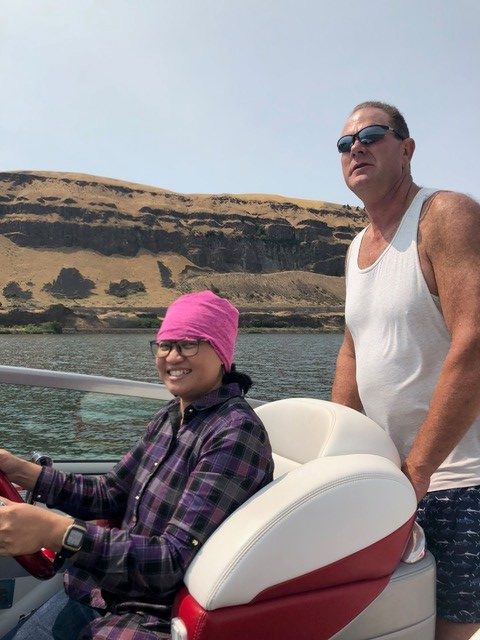 For Padget, it has been interesting to watch his guests and neighbors grasp the experience with both hands and start to put faces and names together and understand the value of USW.

“When these buyers get a shipment of wheat they might say, ‘hey, maybe this came from Ryan Thompson’s place, I remember being there,’ because it really is about forming relationships. I mean you have to have a good quality product and economics always dictates things in the end, but people wanting to feel good about what they are buying and doing is a big part of doing business, whether its buying a latte from your local barista or buying a cargo of wheat out of Portland,” said Padget. “USW is a worldwide organization that focuses on very localized grass roots efforts, so it is sometimes hard to put those together in words. But USW is there for technical and trade service and really helps facilitate those relationships. Sharing what the USW staff does for U.S. wheat farmers and the places they go on our behalf is really rewarding to me.”

When Padget travels overseas and reconnects with the people he has hosted on his farm — often by sharing another meal where products made from U.S. wheat are served — it makes what he does come full circle. 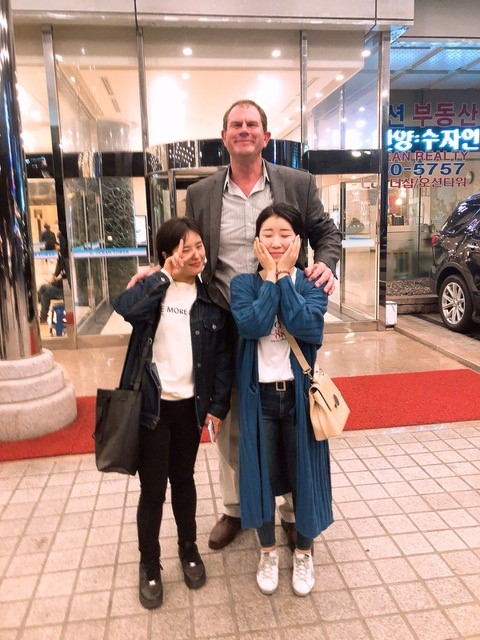 “When someone says, ‘I was on your farm, it was the best part of my trip, thank you,” that is so rewarding,” said Padget. “That is why I do it. When you are half a world away and someone remembers standing on your dirt, that is pretty neat. Those experiences are what they are still talking about. So, you know it is not time wasted, but time well spent.” 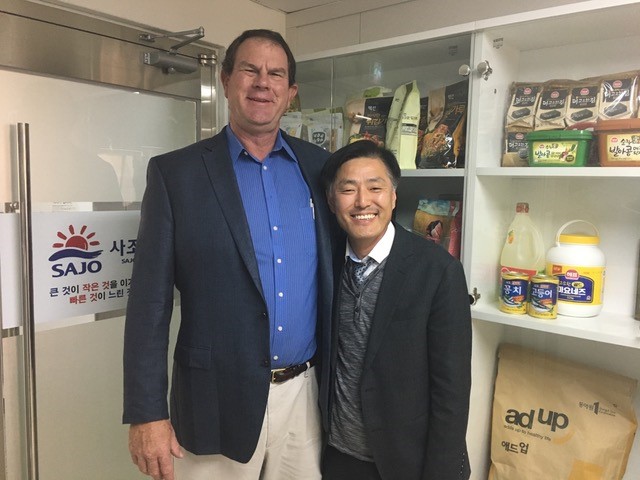 “I have met a lot of U.S. wheat farmers in my three decades in the flour milling industry,” said Pinca. “They share the same ardor, industry and a common desire to reach out to their customers and processors of the grains they produce. That is what makes partnerships last.”

“We’ve had visitors from a lot of different countries, and I hope that we continue to host people from other parts of the world,” said Padget. “Without the support of family, friends and neighbors, it would be just another visit; but because the service USW provides sets the U.S. wheat industry above our competitors, you want to help them make unforgettable memories while they are here. Making memories makes it worth it.”