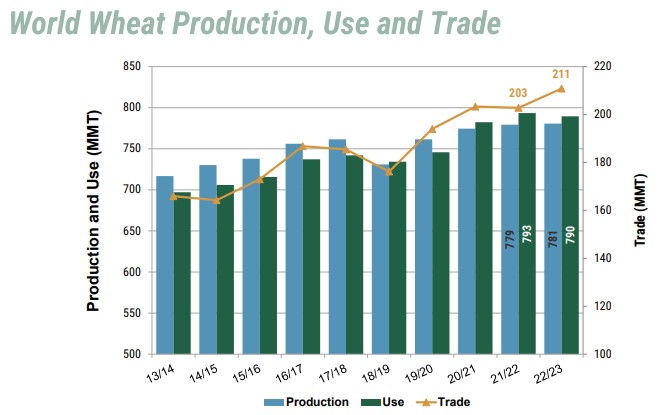 USDA released its December World Agricultural Supply and Demand Estimates (WASDE) report Dec. 9, 2022, that included no substantial changes for global and domestic wheat markets. Given the overall volatility in 2022, a somewhat calming report was probably a blessing in disguise for wheat buyers who should, however, keep an eye on declining global stocks and exportable supplies.

Based on USDA’s latest global wheat production estimate of 781 million metric tons (MMT) and total use of 790 MMT, marketing year 2022/23 will be the third in a row and the fourth in the last five years in which use has exceeded production.

The WASDE report included a 500,000 metric ton drop in estimated global ending wheat stocks to 267.3 MMT. If realized, those supplies will be the lowest since 2013/14. Of that total, an estimated 54.5 MMT will be found in “Exporter” countries, 68.4 MMT will be in “Importer” countries and 144 MMT will be in China. That means 54% of global ending stocks are locked out of world trade, an amount that is up from USDA’s estimate of about 51% in December 2021. 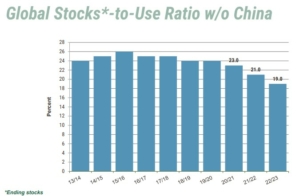 Locked in China. Global wheat stocks-to-use ratios are much lower when China’s 144 MMT of wheat stocks are removed from the equation. The down-trend is clear and has accelerated since 2019/20. The current stocks-to-use ratio of 19% without China, which does not export wheat, is the  lowest level in more than 10 years. Source: USDA, U.S. Wheat Associates.

Given the poor condition of the Argentina wheat crop, USDA lowered ending stocks there by 500,000 metric tons, but increased European and Australian ending stocks. Analysts were somewhat surprised USDA did not change its 91 MMT estimate of Russian wheat production.

While USDA did not change its U.S. ending stocks estimate of 15.54 MMT in the latest WASDE report, it is the lowest U.S. ending stocks since marketing year 2007/08. Buyers that were in the market that year will remember the stunning run up in wheat prices fueled by extremely low global stocks. At one point that year, only a few weeks of world wheat supplies were available.

“When exporters hold so few stocks, this increases market volatility and leads to higher wheat prices,” Wirsching said. A condition made even more uncertain by Russia’s on-going incursion into Ukraine. 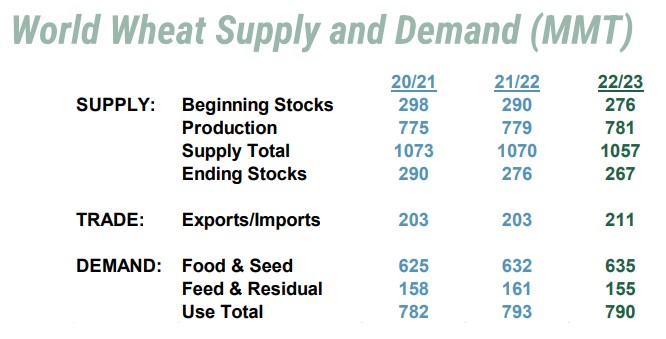 The world wheat trade estimate increased in December by 2.2 MMT to 210.9 MMT. December’s report suggests higher exports from Ukraine, Russia and the EU. While expecting Australia’s exports to reach 27.5 MMT, almost a record volume, USDA also noted that a significant portion of Australia’s exports will be for animal feed following harvest rain and lower quality in New South Wales. The world total estimated exports and imports for the year now stands at 211 MMT