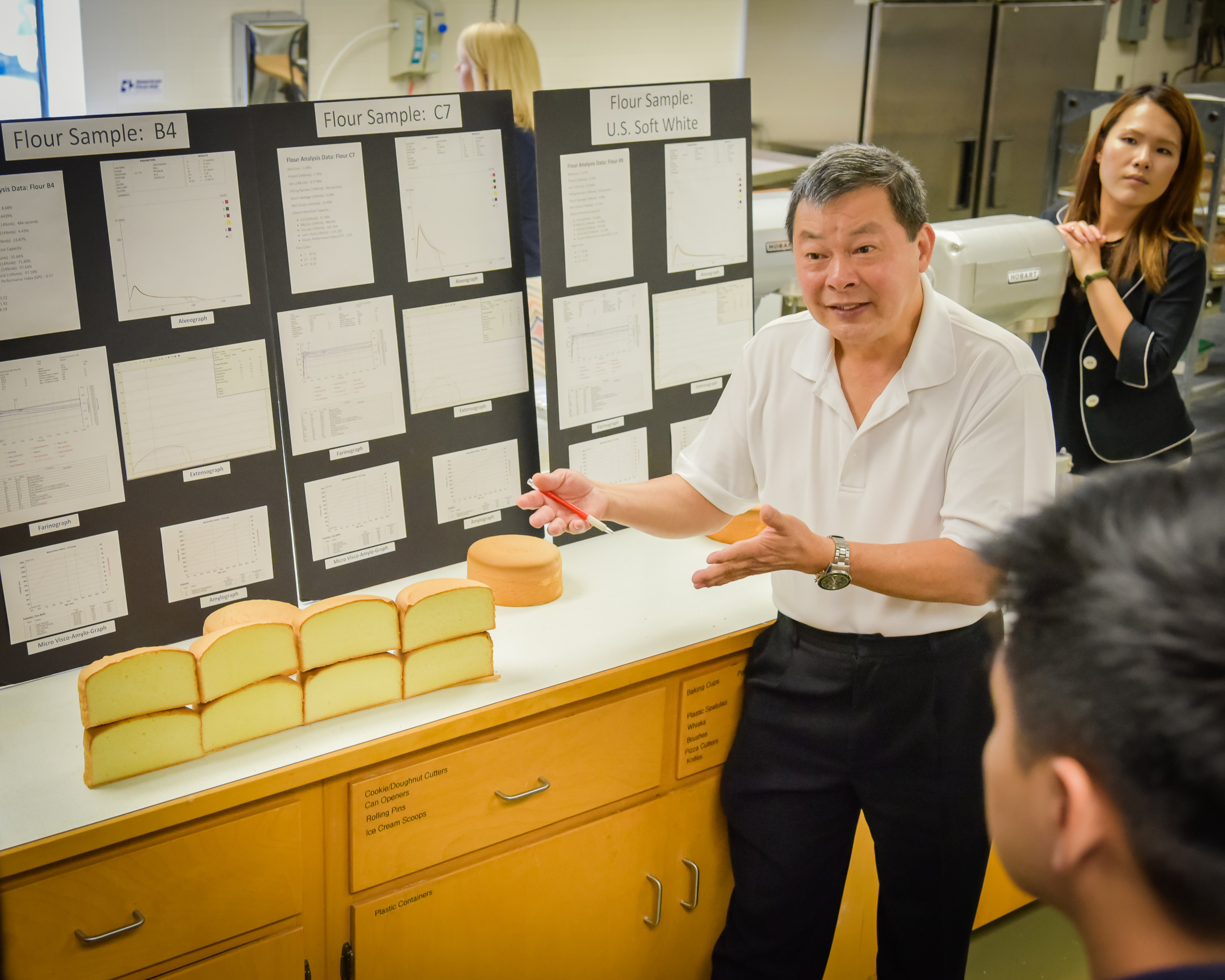 Most U.S. wheat farmers will never meet Roy Chung, but during the last four decades he’s played a vital role in selling the wheat they grow. As the bakery consultant for U.S. Wheat Associates based in Singapore, Chung meets with customers around Asia to show them how to use U.S.-grown wheat in the cakes, cookies, crackers and noodles they sell. U.S. Wheat is the overseas marketing arm of the industry.

His hard work pays off. The countries Chung visits in south Asia — Singapore, Thailand, Malaysia, Indonesia, the Philippines, Vietnam, Myanmar and Sri Lanka — purchase about 4.4 million metric tons of wheat worth $1.1 billion each year, according to U.S. Wheat. That’s more than 16 percent of all U.S. wheat exported each year.

Chung’s secret: He tells buyers they will not find another, more sincere farmer-owned wheat organization anywhere in the world. U.S. wheat may not be the cheapest option, he says, but it offers the best value.

“In business, all people want to make money; our motivation is to assist them (making) money while getting the satisfaction of selling our products to them,” Chung said. “Hard work and sincerity never fails.”

Industry leaders light up when they talk about Chung.

“It’s in his soul,” said Mike Miller, the U.S. Wheat chairman, a member of the Washington Grain Commission board and a Ritzville, Wash., farmer. “This is who he is. He doesn’t do it for any other country. He’s trying to do it so we can sell more wheat at a better price.”

Chung’s “unparalleled” knowledge of wheat starch properties and how they perform in a food product leads people to seek out his expertise. He helps companies design production lines and new products, said Dana Herron, a Connell, Wash., seed dealer and grain commission board member.

“We would be 20 years behind in marketing and sales if there’s no Roy Chung,” Herron said.

Before that, he assisted in his father’s bakery in Malaysia. Chung was home during college vacation and helping his father, who immigrated from China to Malaysia during World War II, when a consultant from Western Wheat Associates asked to use the bakery for a product demonstration. Western Wheat later merged with Great Plains Wheat to form U.S. Wheat Associates.

“My father was generous in allowing his competitors into the bakery to observe the demonstration as well,” Chung said.

Chung’s father did not speak English and the consultant was working alone, so Chung served as his assistant and interpreter for the event. Months later, he received an offer to join Western Wheat, but declined, as he was not yet finished with school. He was studying production engineering at the Ungku Omar Polytechnic in Malaysia.

Western Wheat waited two years for Chung to complete his education, and he was interviewed by Tom Mick, who would later become CEO of the Washington Grain Commission. Mick hired him to join WWA.

“He has a unique ability to teach people how to make a superior end-product and at the same time reduce costs that would make it profitable,” said Mick, who is now retired.

“I think (Chung is) one of the greatest hires I’ve ever been involved with,” Mick said. “To the wheat producer, he is a godsend.”

Selling U.S. wheat. If a buyer is new to U.S. wheat, Chung goes back to basics. He explains the difference in U.S. wheat classes, their uses and the suitability of different classes for the products they make in each country.

He likens this to teaching them the ABCs before turning the letters into words, then the words into sentences.

“For the more experienced buyers, it gets even more exciting if you can string sentences to make paragraphs,” Chung said. “And then paragraphs to make a chapter and eventually chapters into an entire book.”

U.S. Wheat employees, he said, show a company the possibilities they can get from the wheat American farmers produce.

“We will provide examples of how others are making money from the wheat that they buy from the U.S.,” he said.

Chung says he is always sincere in his approach and communication.

“Don’t bring the buffalo to the river to make it drink if the buffalo is not thirsty,” he said.

If a buyer is similarly sincere, U.S. Wheat will hold his or her hand all the way and show them how to extract value in any market, Chung said.

“He’s made those companies so much money using Pacific Northwest soft white wheat, he is highly respected,” Herron said. “People listen to his every word, because he has their best interest at heart.”

Teaching bakers. U.S. Wheat cooperates with United Flour Mills in Thailand to offer specialized baking courses at the mill’s baking and cooking school in Bangkok. Chung was instrumental in offering the first course. The program has continued for 38 years.

“U.S. Wheat finds value in educating young bakers to see and feel the differences in quality when compared to wheats of other origins,” Chung said. “The lasting impression we impart to these bakers (stays) for their entire lives.”

Many bakers trained at the school move on to the upper ranks of their organizations, helping their company expand and securing a stable supply of U.S. wheat.

“I like to say that I impart knowledge that will enable my students to make good judgment,” Chung said. “More importantly, I leave them to pursue their careers in a more passionate way knowing that I, as a representative of U.S. Wheat, will always be there for them. I am sincere when I make this offer.”

As a result of working with Chung, when mills go to grain purchasers with their specifications for U.S. wheat, they know what they want and how to ask for it, Miller said.

“He’s actually helped raise them in the wheat world,” Miller said. “He can go into their mill, they know exactly what he’s talking about.”

“When they hear Roy’s in the house, it’s like Paul McCartney just showed up,” Miller said. “They flock to him. He engages them, he remembers their names, asks them how they’re doing, ‘Have you addressed this problem?’ or they ask him, ‘Hey, we have this.’ They trust him. He’s no-nonsense. He stands behind his work.”

An ‘encyclopedia’. Chung worked closely with Vietnamese flour millers and bakeries to help them understand the uses of U.S. wheat, said Dinh Xuan Quang, technical manager of Vietnam Flour Mills. It took a long time because U.S. prices were higher than those of competing countries.

Wilma Bocaya, vice president of Jollibee Foods Corp., a fast food bun manufacturing company in the Philippines, attended Chung’s course in 1994, after a colleague attended the year before. Her company sends students every year.

“When we met Roy in 1993, we only had 105 Jollibee stores,” Bocaya said. “This number has now grown into more than a thousand in the Philippines.”

The company is expanding its baking operation this year to support further growth.

“Suffice it to say that the technical support we got from U.S. Wheat through Roy as consultant or as course instructor enabled us to provide products that meet our customers’ expectations,” Bocaya said.

“Through my tenure at UFM, I have not met a consultant more knowledgeable in his trade than Mr. Chung,” she said. “He is known among us as ‘the walking baking encyclopedia.’”

Changing times. With the internet, many customers are more knowledgeable and demanding, Chung said. Few countries produce generic flour for breads, cakes and cookies, and most bakeries use specialized flour for specific products.

“We must justify these sales with scientific facts and examples of how this basic information has been used to produce more specialized flours for specialized products,” Chung said.

U.S. Wheat must keep re-educating itself technically to sell wheat at an advantage, Chung said.

“If we fail to do that, we will be just another generic seller, and worse still, a residual seller,” he said.

Chung said it’s not currently possible to retire, since there are few people with his technical expertise in the industry. He’d like to leave his customers in good hands, he said.

He hopes to leave the U.S. Wheat office with a younger team of technical staffers who would work “as passionately and sincerely with our customers as I have.”

If U.S. Wheat hired someone he could begin to train this year, he said, he could see retiring in five years.

Miller, the U.S. Wheat chairman, knows at some point Chung will want to slow down.

“I don’t know if you can replace that type of historical knowledge and energy with one person,” he said. “I bet you’d have to do it with two.”

That could be a good thing for wheat farmers, Herron believes.

“If we had a couple more Roy Chungs, we wouldn’t have to worry about competition overseas,” he said. “He makes that big of a difference.”