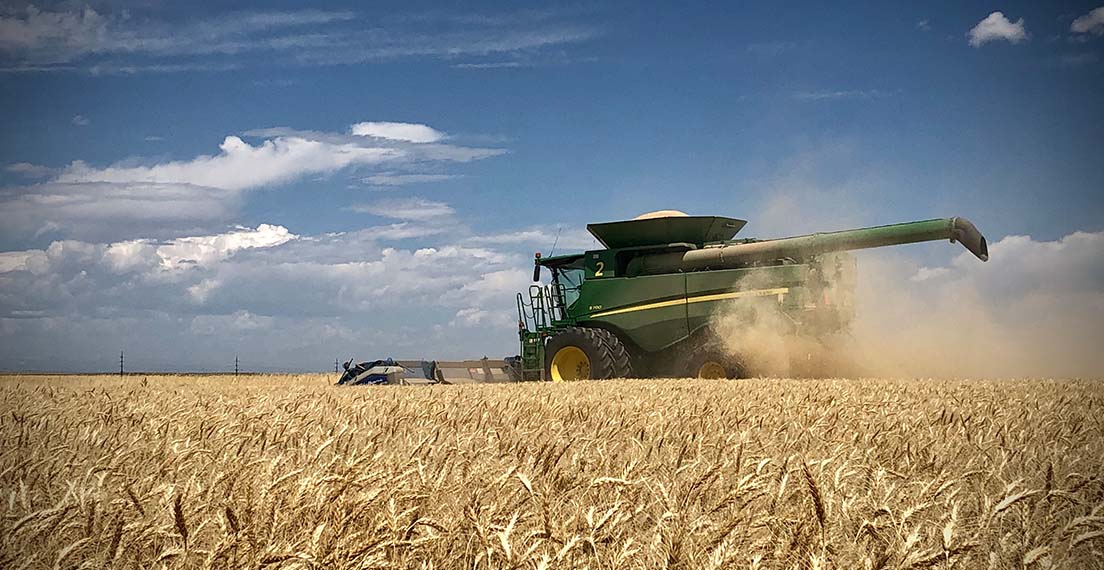 Throughout 2021, the U.S. Wheat Associates (USW) Wheat Letter is featuring the many stories of the people, processes and passions that go into producing and delivering high quality U.S. wheat to the world. Our focus will be on quality that starts with dedicated public and private wheat breeders and researchers, is fostered by hard-working farm families, is maintained by grain handlers and observed in hundreds of wholesome, nutritious wheat foods.

Plant breeders are Promethean individuals, oftentimes sacrificing their blood, sweat, tears, money, and time for their craft. This bridge between the chasm of art and science is a task humans have participated in since the dawn of agrarian societies.

Since 1999, Scott Haley has served as the Project Leader of the Wheat Breeding and Genetics Program in the College of Agricultural Sciences at Colorado State University (CSU). In December, Haley will embark from CSU into the next chapter of his life, retirement. But not before one last accolade: Haley was recently awarded the Crop Science Research Award from the Crop Science Society of America. Only one other person from CSU has ever received it.

Improving the performance and reputation of Colorado wheat has been a through-line for Haley since he began his work at CSU in 1999. At the time, the major insect pest in wheat production was the Russian Wheat Aphid, which he set out to combat while also addressing the general quality of the state’s wheat.

Although the significance of the Russian Wheat Aphid has declined, Scott Haley’s work to create better-quality, disease-resistant wheat varieties continued.

“The wheat industry told me that they wanted better quality varieties,” said Haley. “They needed better milling and baking properties, so we spent a lot of time working on those improvements.”

When Scott Haley arrived at CSU, 40-percent of Colorado’s wheat crop was planted with a variety called TAM 107, which had notoriously low-quality.

“When we’d have foreign buyers come in from around the world, they would ask how much TAM 107 was growing in Colorado,” said Darrell Hanavan, former executive director of the Colorado Wheat Administrative Committee (a member of U.S. Wheat Associates) and Colorado Wheat Research Foundation. “I had to tell them, and they wanted to exclude purchasing wheat from Colorado entirely. The same was true in the domestic market. The flour millers didn’t want to buy Colorado wheat because TAM 107 quality was so bad.”

TAM 107 was such a low-quality wheat variety because it was bred to be high-yielding, largely disregarding quality. Haley and his team worked diligently in his early years at CSU to identify wheat varieties that were both high-yielding and higher-quality, dispelling the commonly held perception that quality and yield cannot be put into the same variety. The release of Hatcher in 2004 was a landmark variety in this regard, as it showed significantly improved quality and roughly 10% higher yield than TAM 107.

Haley was also one of four co-inventors who developed a patented non-GMO herbicide-tolerant wheat trait that is the basis of the CoAXium Wheat Production System, which is an alternative to Clearfield wheat. Currently patented in 53 countries, CoAXium wheat varieties are projected to return up to $5-million annually in royalties to further support the CSU wheat research program.

Most recently, Haley turned his attention to the Wheat Stem Sawfly, which has now become increasingly prominent in wheat production, as the presence of Wheat Stem Sawfly larvae can decrease yields up to 50%. Most wheat varieties have hollow stems, so to resist damages by the Wheat Stem Sawfly, Haley and his team developed a solid-stem wheat variety that hinders the ability of the larvae to damage wheat in the same way as if they were hollow-stemmed. The first variety of its kind released in Colorado was released in 2019 under the name “Fortify SF.”

“I think about what I do in terms of helping the farmer,” said Haley. “The farmers in these rural communities have to stay profitable, for one because our population needs the food, but if they aren’t profitable then they’ll stop farming. If we develop wheat that’s resistant to rust, then the farmer doesn’t have to apply a fungicide – because farmers don’t want to use fungicides. Let’s say fungicide costs $10 an acre, and a farm is 10,000 acres – you think the farmer wants to spend $100,000? That’s what we do as breeders: we lower the cost of production by enhancing yield and improving insect and disease resistance so the farmer can stay on the land and keep producing food.” 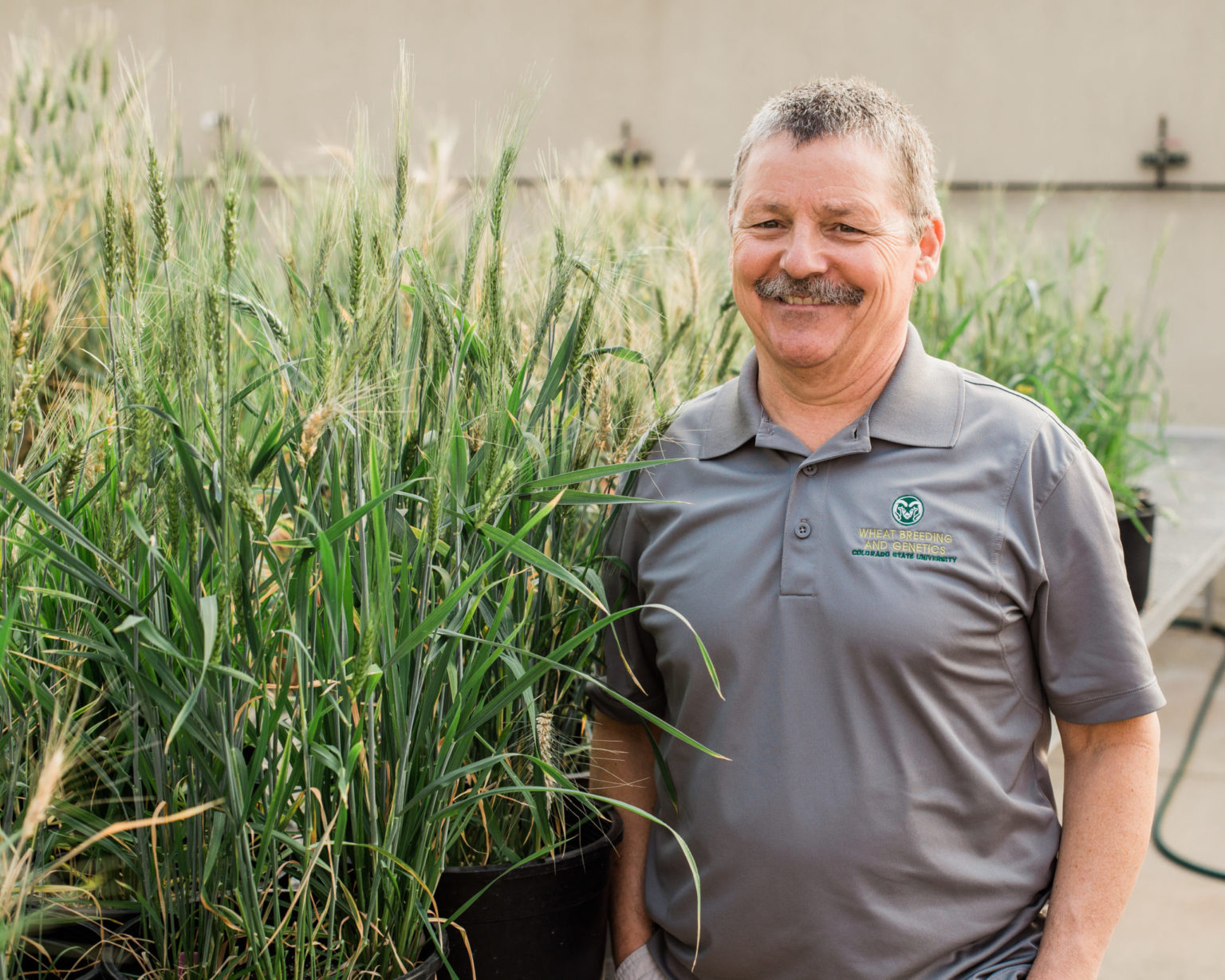 “That’s what we do as breeders: we lower the cost of production by enhancing yield and improving insect and disease resistance so the farmer can stay on the land and keep producing food.” Dr. Scott Haley. Photo Copyright Colorado State University.

Relationship with the Colorado Wheat Industry

The Colorado wheat industry, comprised of the Colorado Wheat Administrative Committee and Colorado Wheat Research Foundation, has a strategic priority of ensuring a best-in-class wheat research program at CSU to provide Colorado producers with the best varieties designed specifically for local conditions. This unique public-private partnership between CSU and the Colorado wheat industry provides collaboration and funding for this world-class program from a combination of state and federal funds provided by the Colorado Agricultural Experiment Station (CSU AES), the Colorado Wheat Administrative Committee (CWAC), the Colorado Wheat Research Foundation (CWRF) and Ardent Mills. CWAC funding comes from a producer-approved assessment on each bushel of wheat sold, and CWRF funding comes from royalties collected on the CSU-developed wheat varieties and novel traits (i.e. non-GMO herbicide tolerance trait) which are owned and commercialized by CWRF; royalties are returned to CSU to further enhance wheat breeding and wheat-related research.

“Scott Haley has turned the Colorado wheat market from a poor-quality market into a high-quality market,” said Hanavan. “All of the varieties that are released are phenomenal quality and recognized by the domestic milling industry and the export market buyers.”

“I feel that over the last 22 years, one of the things that I’m most proud of is the way that we’ve strengthened the relationship between CSU and the wheat industry in Colorado – and this relationship is second to none,” Haley said. “It hasn’t been only about the numbers of varieties or their adoption in Colorado, but the fact that together we built a national brand called “PlainsGold.” I was involved with the CWRF in the development of the PlainsGold brand going back over 10 years, and it was built to market the CWRF varieties which are now available from Texas to Washington and everywhere in between.”

Looking back at a legacy, and moving forward

Looking back on his time at CSU, Haley is proud of what he and his team have accomplished over the years.

“I grew up in the suburbs, far away from agriculture, and initially wanted to work in international agriculture helping subsistence farmers in developing countries. Various things changed in my personal life, and I responded by channeling my energies into trying to help wheat farmers in Colorado. I took my responsibilities very seriously, sometimes too seriously, and feel good that I gave 110% effort throughout my tenure at CSU. Together we have accomplished great things, and in that regard, I feel very proud of what we have accomplished. The other thing I’m most proud of is what I’ve done to try to help develop people, be them students or full-time researchers, that are working in the department or in the breeding program. Being a fair, supportive, and understanding project leader and mentor was very important to me, and in fact, it was just as important to me as doing right by the growers.”

The wheat breeding program at CSU will continue under the direction of Dr. Esten Mason, Associate Professor of Plant Breeding and Genetics, but the legacy of Scott Haley will live on through the relationships built with Colorado wheat growers, students, and the North American agricultural community at large.