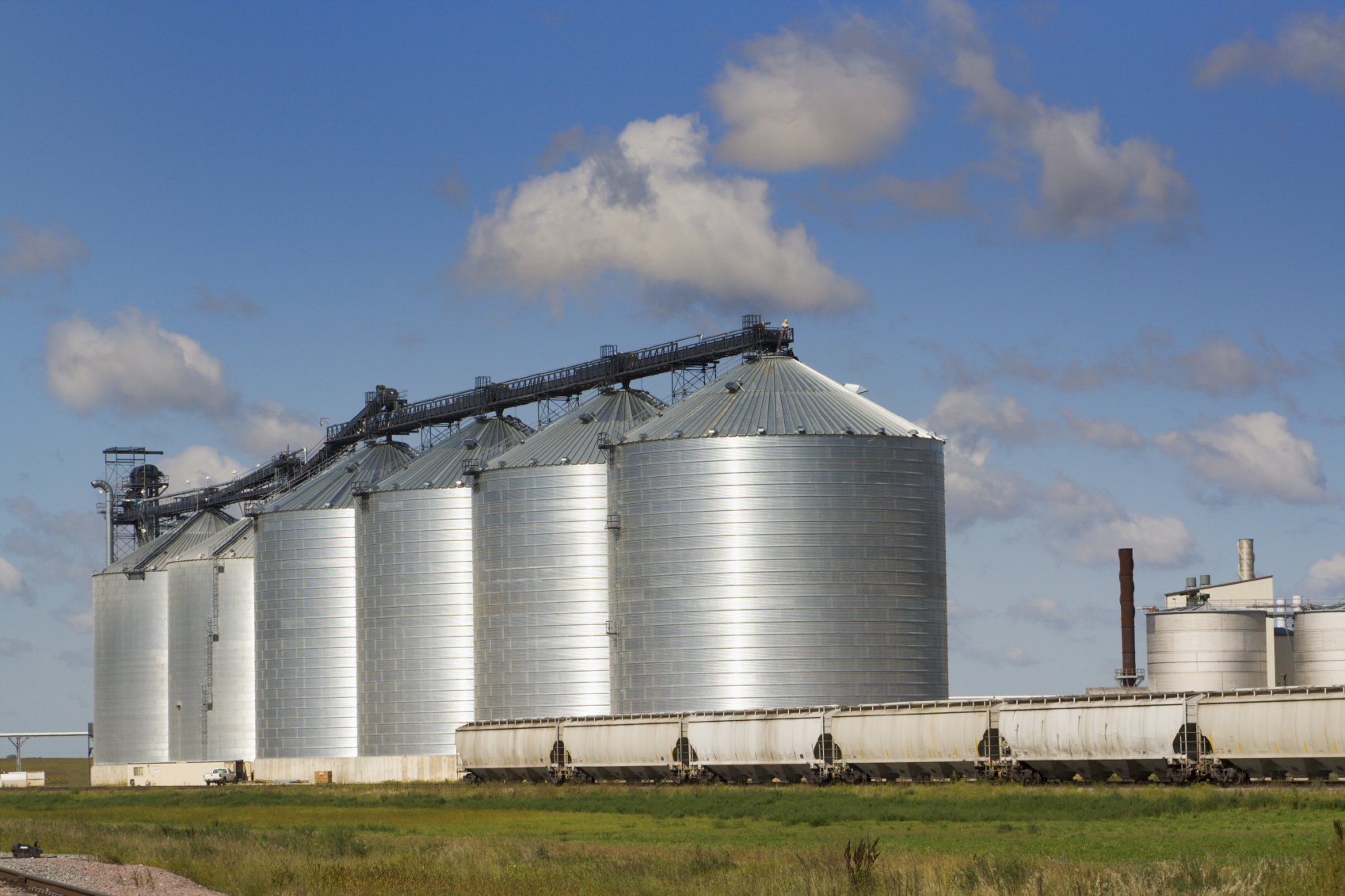 It is important for overseas wheat buyers to understand the potentially significant impact of price movement in the domestic secondary rail market on export prices.

U.S. railroads auction domestic freight in the “primary railcar auction market.” Grain shippers can meet their need for rail capacity by trading this freight among themselves in the secondary railcar auction market at prices above or below the primary tariff rate, depending on national supply and demand conditions. According to the USDA Agricultural Marketing Service (AMS), the secondary railcar market evolved to enable rail movements of grain to be more responsive to market pressures, like increased commodity exports or reduced railcar availability.

This year, AMS data show the average secondary rate for shuttle trains to be delivered in October was up 36 percent between July 30 and Aug. 20 to $1,172/car, nearly three times greater than the previous 3-year average. 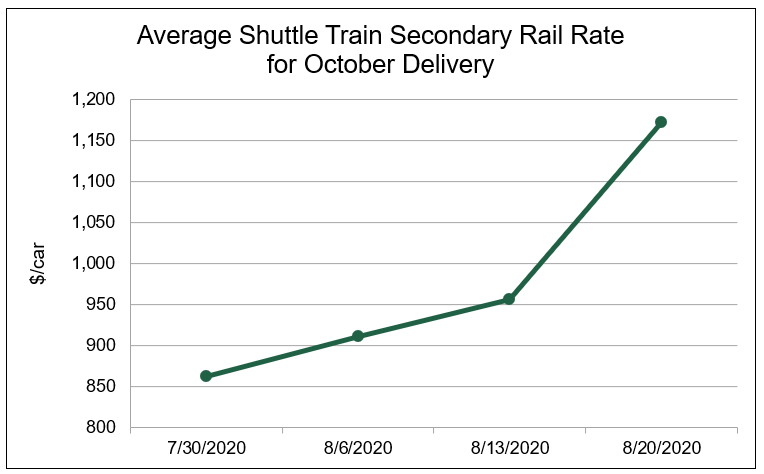 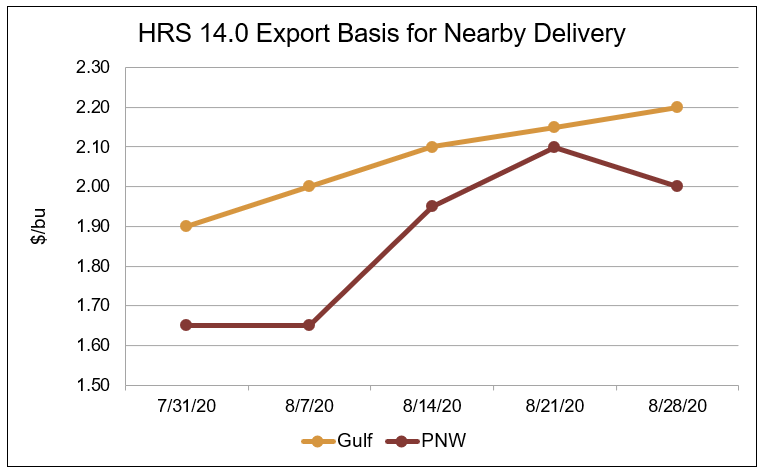 According to U.S. grain traders, the unexpectedly swift pace of agricultural commodity exports to China and rail labor shortages due to COVID-19 furloughs are supporting secondary rates and, in turn, wheat export basis levels. 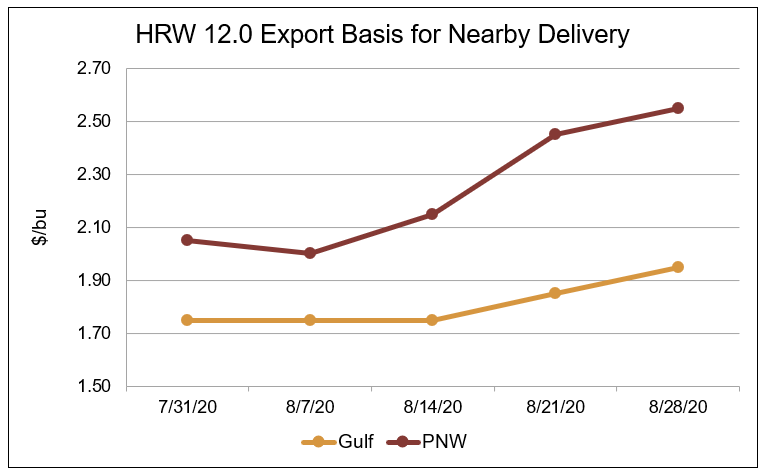 Limited export elevation capacity out of the Gulf and PNW due to the swift uptick in Chinese demand for U.S. agricultural goods continues to add support to wheat export basis values. 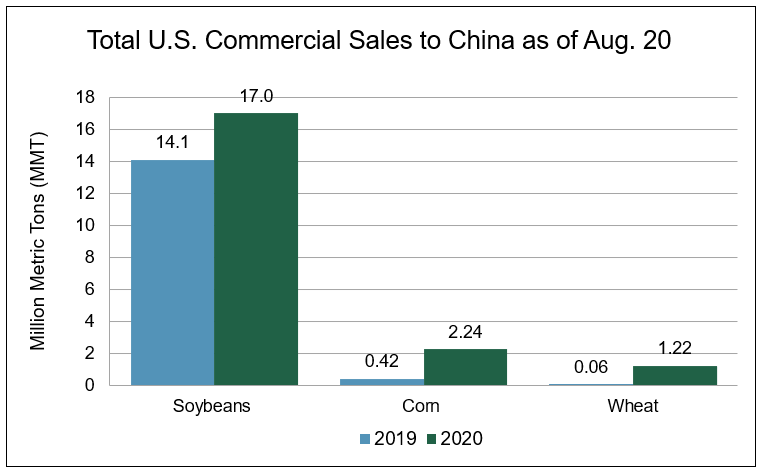 “September and October are at capacity; we can’t add a lot more business for those months. If anyone were to sell anything for delivery in those periods, it would raise elevation costs substantially,” said another grain trader. Additionally, export elevators are going to charge more to elevate wheat in the next couple of months because they expect to store more corn and beans at that time of year. It is more complex and expensive for export elevators to handle multiple commodities at the same time, said a representative from the U.S. grain trade.

Soybeans. “A lot of customers are surprised by the fact that export capacity is filling up so quickly with soybeans,” said a U.S. grain trader. The reason, however, is no surprise: China’s dramatic increase in U.S. soybean purchases this year compared to previous years. According to USDA, China bought 17.0 million metric tons (MMT) of U.S. soybeans for delivery in the soybean marketing year 2019/20, which ended Aug. 31. That is 21 percent more than the 14.1 MMT China purchased for delivery in marketing year 2018/19.

Wheat. It is no secret China has re-emerged as a buyer of U.S. wheat in a big way. According to USDA, as of Aug. 20, total U.S. wheat export sales to China total 1.22 MMT, for delivery in the current wheat marketing year. magnitudes greater than the 60,500 metric tons (MT) sold this time last year. China is currently the second largest market for U.S. wheat in marketing year 2020/21, which started June 1.

“If China wants to purchase more U.S. wheat for October, November and December deliveries, we could see export basis levels go higher in the near future,” said an industry contact.