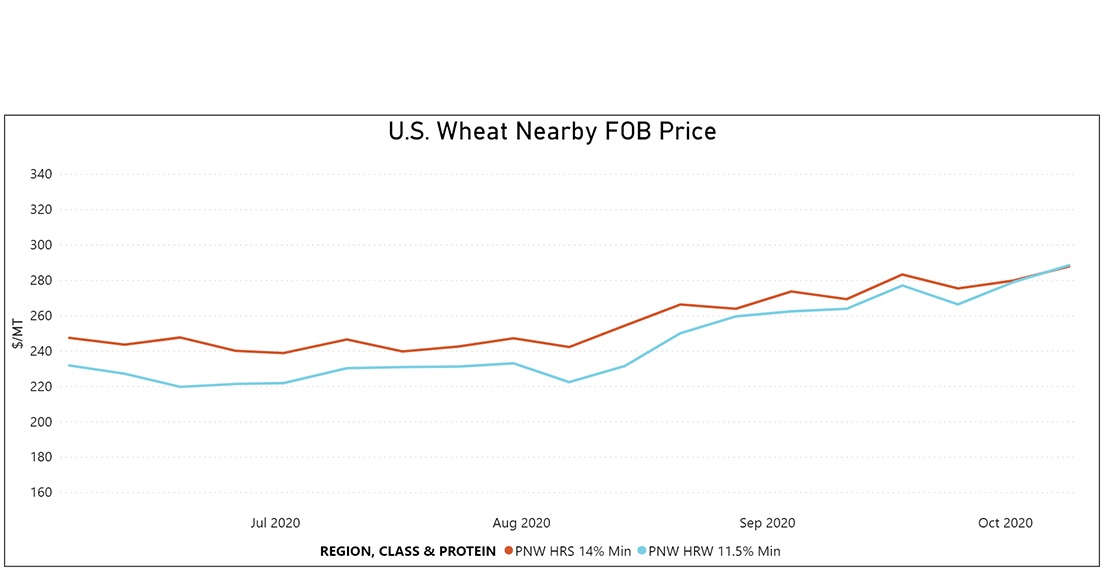 It is no secret that wheat futures prices have reached unexpected heights recently. Higher futures prices usually pressure export basis values when farmers sell wheat “into the rally” because that increases exportable U.S. wheat supplies. However, we are seeing a completely different phenomenon in the recent market. Extremely tight elevation capacity out of the Gulf and Pacific Northwest (PNW) due to massive U.S. agricultural commodity exports to China is sustaining high wheat export basis values, despite increased farmer selling.

CBOT soft red winter (SRW) futures and KCBT hard red winter (HRW) futures, specifically, have jumped over the past month beyond expected levels. Between Sept. 11 and Oct. 9, for example, CBOT SRW futures prices increased 11 percent to $5.94/bu, the highest since December 2014. Over the same period, KCBT HRW future prices jumped 13 percent to $5.36/bu, the highest since August 2018. MGE hard red spring (HRS) futures have increased too, by 6 percent since Sept. 11 to close at $5.44/bu on Oct. 9.

U.S. grain traders agree generally that the “run up” in futures prices is attributed to technical buying, where “managed money” or commodity funds buy significant amounts of U.S. wheat futures contracts with the expectation that the contracts will gain value over time. While not the whole story, part of this technical buying spree can be attributed to varying severities of dryness from Argentina to the U.S. Great Plains to the Black Sea.

These high export basis levels could hold on. “Increased farmer selling hasn’t made a dent on export basis,” said one grain trader. Limited elevation capacity is the reason.  That is because China has purchased 22.1 million metric tons (MMT) of U.S. soybeans, 9.98 MMT of corn and 1.48 MMT of wheat for delivery in 2020/21, as of Oct.1. Such demand causing “nearly non-existent” elevation capacity for wheat is sending export basis values higher.

“October, November and now nearly all of December are at capacity; we can’t add a lot more business for those months. If anyone were to sell anything for those delivery periods, it would raise elevation costs substantially more,” said another industry contact.

Additionally, export elevators are likely to charge more to elevate wheat in the next couple of months because they expect to store and export more corn and soybeans. It is more complex and expensive for export elevators to handle multiple commodities at the same time, said a representative from the U.S. grain trade.

The two components of FOB are the futures price plus export basis so when both go up, the FOB prices jump substantially.

What does this mean moving forward?

While U.S. Wheat Associates (USW) does not have a crystal ball, based on our information, we expect  export basis levels will stay at these higher levels through January assuming Chinese buying remains strong.  Futures prices could come down off their recent rally if, for example, “managed money” reverses its long position in wheat futures, but there would have to be a significant downward correction to take pressure off current FOB values.