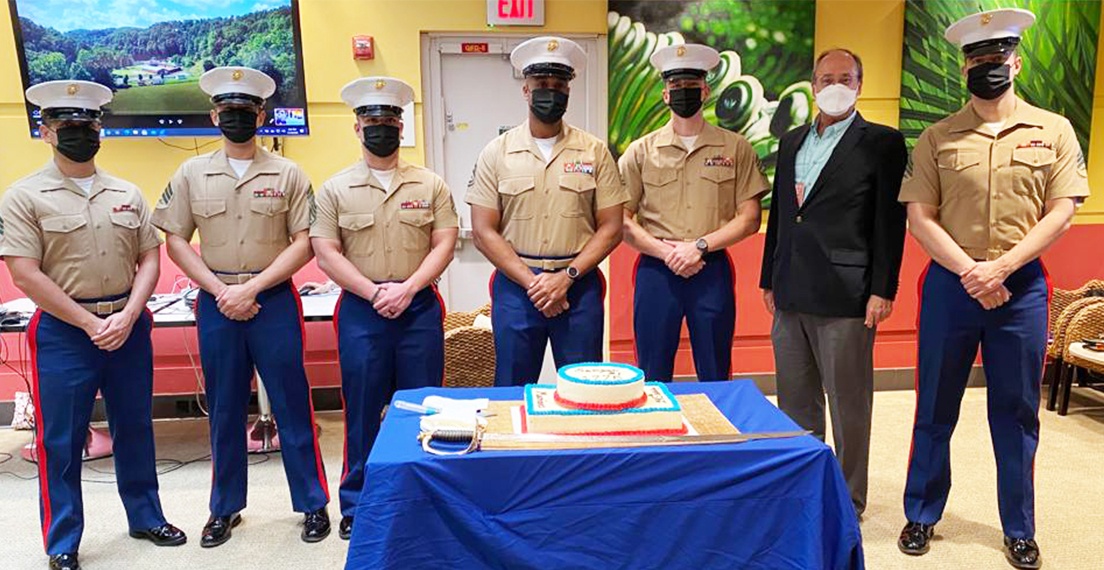 U.S. Wheat Associates (USW) staff and stakeholders often encounter embassy personnel while sharing information with the offices of ag affairs and USDA Agricultural Trade Offices (ATO) assigned to posts around the world. The overseas support of the U.S. State Department and USDA staff in markets with USW offices is essential to our mission to bring services and information to U.S. wheat buyers, wherever they may be. U.S. embassies and consulates are guarded by special U.S. Marine detachments who circulate on two- to three-year cycles to one of 181 posts around the world. Visitors to embassies will invariably pass through security that is handled primarily by local contractors. But every day at the final checkpoint, one or more U.S. Marines, usually dressed in fatigues, stand watch.

The U.S. Marine Corps was officially founded Nov. 10, 1775, and it has become customary in the 20th century to celebrate this founding wherever active duty Marines gather. Hong Kong, where USW also has an office, is no exception. USW was honored to donate the cake, made with U.S wheat flour, used in this year’s ceremony at the U.S. Consulate General in Hong Kong and Macau. As USW Regional Vice President for China and Taiwan, I attended the ceremony and, accompanied by ATO Attaché Ms. Alicia Hernandez, thanked the Marines on behalf of U.S. wheat farmers (photo above). 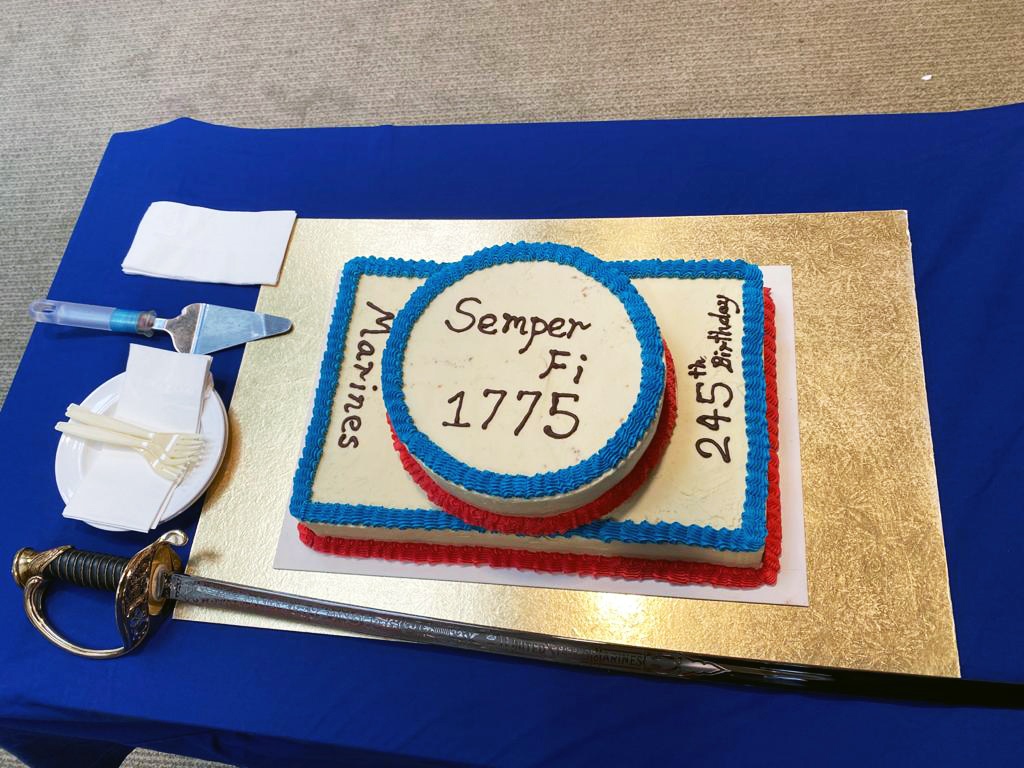 Ceremonial cake made with U.S. wheat flour and donated by USW carries a shortened version of the U.S. Marine Corps motto in Latin, “Semper fidelis” translated to English as “Ever faithful.”

The Master of Ceremonies, the head of consulate security and a non-active-duty Marine himself, gave the history behind the cake ceremony and then played a video by the Commandant of the U.S. Marine Corps, General David Berger, featuring stories from U.S. Marine Corps veterans sharing memories from their time in service. 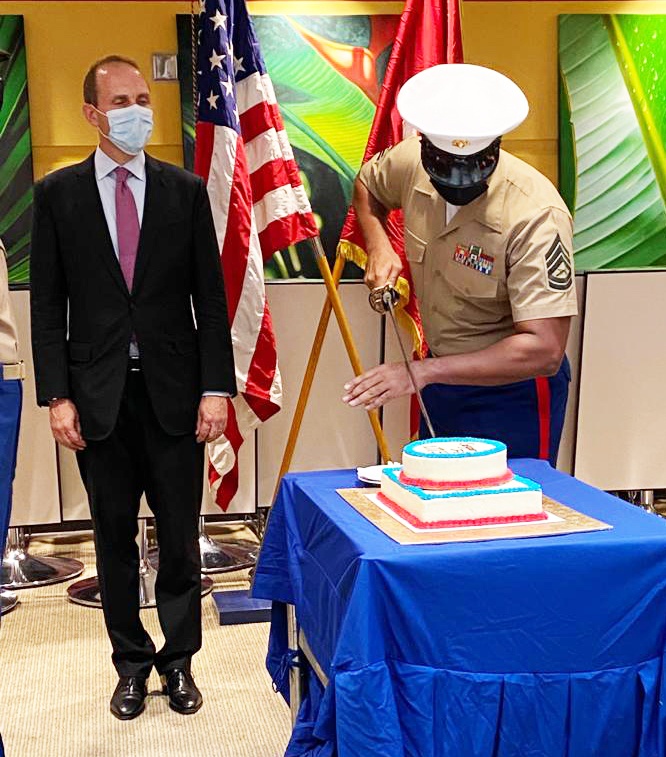 The cake is cut with a ceremonial sword by the commander of the U.S. Marine Corps detachment at the U.S. Consulate General in Hong Kong and Macau. 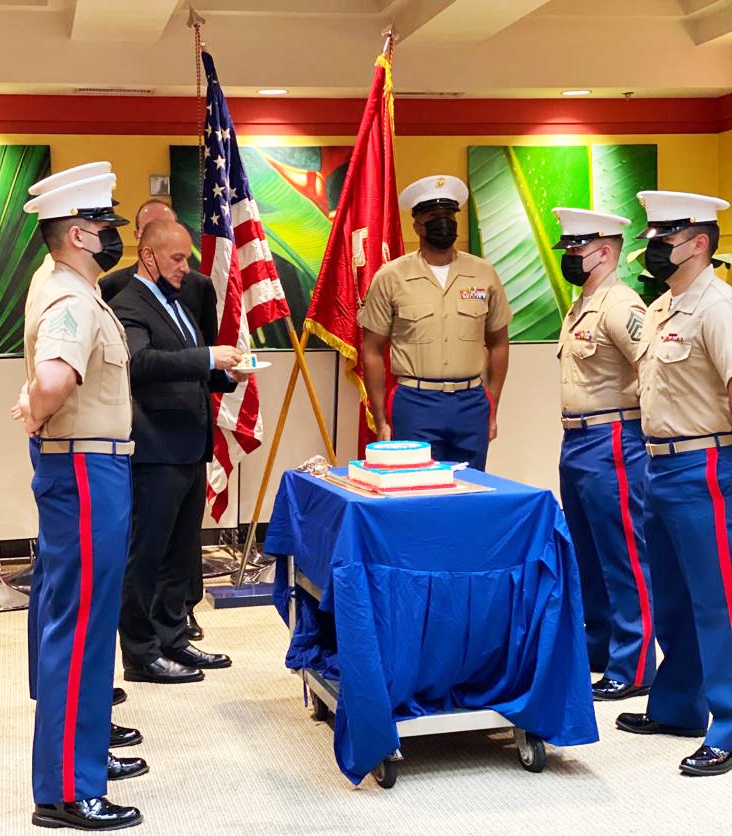 The first piece of ceremonial cake is served to the Guest of Honor, U.S. Consul General Hanscom Smith.

After the Consul General made concluding remarks that thanked, among others, U.S. wheat farmers for their contribution. The ceremony concluded with an acapella performance of the Marine’s Hymn and all guests were invited to enjoy the cake and beverages.

While we often see these soldiers during our work and travels, it is rare to have the chance to converse with and thank them for their service, since making small talk is not part of their job description. USW is happy for the opportunity to get to know at least one detachment of the U.S. Marine Corps that help us do our work, and to express our thanks for their work at posts all over the globe.