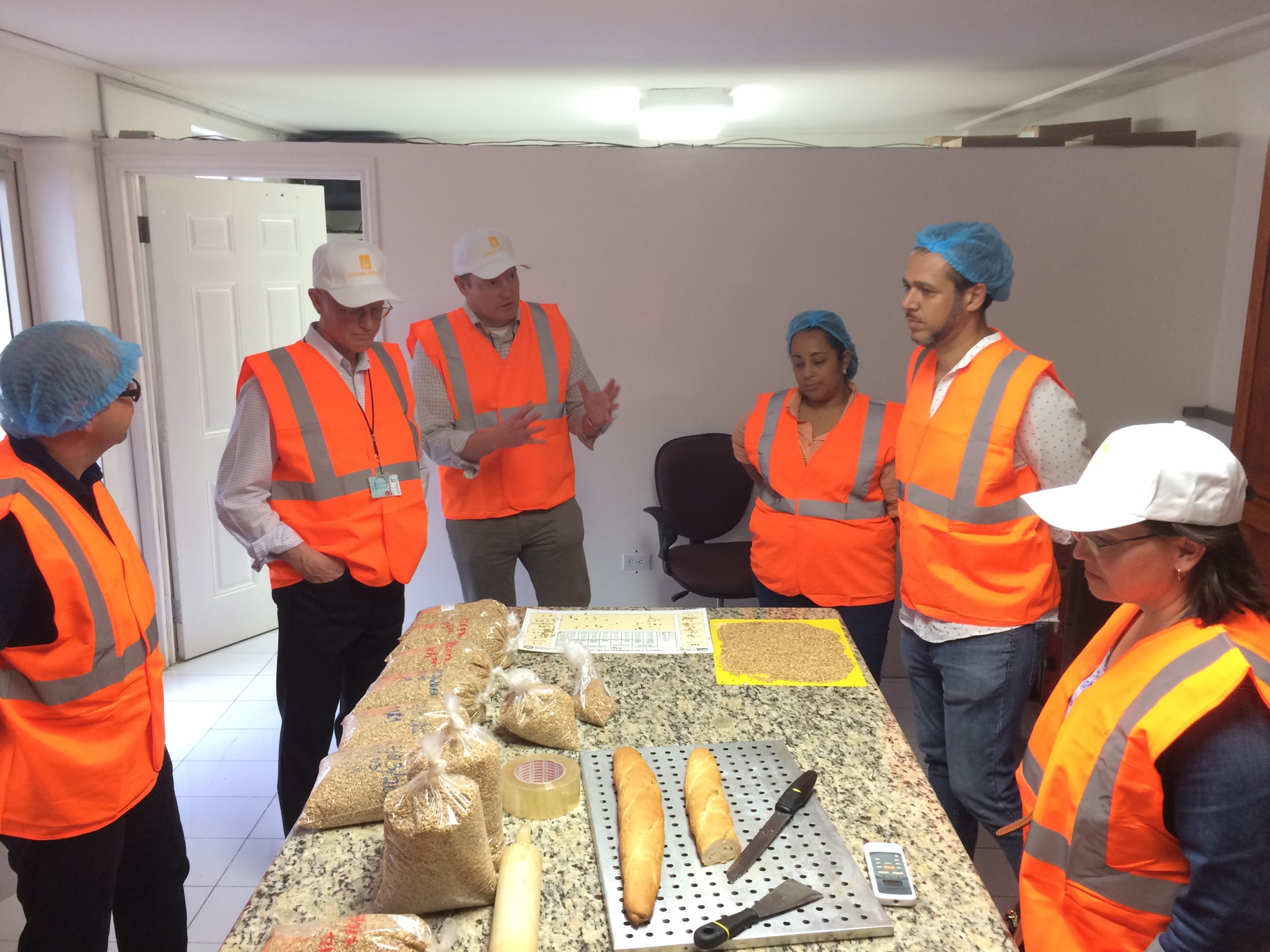 Wheat harvest is the culmination of a year’s worth of hard work and prayers. As the big day approaches, farmers contemplate many questions. What is the yield going to be? Is the quality going to be good enough to avoid discounts? Will the price go up or down? At the same time, on the other end of the supply chain, their customers are pondering many of the same questions.

Every year, U.S. Wheat Associates (USW) sends a group of farmers (selected by state wheat commissions) to tour a region of the world and gain a better understanding of what customers want and need. Earlier this month, three U.S. farmers traveled to Mexico, Haiti, Ecuador and Chile, including: Rachael Vonderhaar, a wheat farmer from Camden, OH, and secretary of the Ohio Small Grains Marketing Program; Eric Spates, a wheat farmer from Poolesville, MD, and member of the Maryland Grain Producers Utilization Board; and Ken Tremain, a wheat farmer from LaGrange, WY, and member of the Wyoming Wheat Marketing Commission. Shawn Campbell, Deputy Director of USW’s West Coast Office, led the team and was joined by overseas staff based in the USW Mexico City and USW Santiago Offices.

“I wanted a better understanding of the full supply chain logistics from my farm to Latin America,” said Vonderhaar. “The trip was a big commitment of time and energy away from our farming operation, but necessary to understand the buying decisions of the millers.”

Spates added, “I hoped to learn about international wheat trade and what USW does, and I was not disappointed.”

In Mexico, the team found the largest importer of hard red winter (HRW) and soft red winter (SRW) wheat, an advanced milling industry and a well-funded association dedicated to constant improvement of the country’s baking industry. On average the past 5 years, Mexico has imported 4.4 MMT of wheat annually, of which 70 percent is U.S. wheat. However, thanks to competitive pricing and low ocean freight rates, the United States is facing increasing competition from Canada, Europe and the Black Sea Region. The customers the team met also expressed concerned about U.S. political rhetoric on the future of the North American Free Trade Agreement (NAFTA).

“It is important to keep our legislators aware of our buyer’s needs,” said Tremain. “Trade with our partners is vitally important and necessary for good relationships.”

The visit to Haiti, the least economically developed country in the Western Hemisphere, was a major learning experience for the team. Haiti imports 134,000 metric tons (MT) annually, 57 percent of which comes from the United States, with the remainder sourced from Russia, Canada and Mexico. Haiti is an underdeveloped market, but with a population of 10 million people, it is growing. The team got a firsthand look at the challenges USW overseas staff face in their efforts to promote U.S. wheat exports there.

“I was most surprised by the poverty in Haiti,” said Spates. “The conditions are emblematic of the varied and challenging places USW works, and yet Haiti is a market with great potential to import more U.S. wheat.”

In Ecuador, the team observed the country’s democracy in action as its citizens voted for its next president. Ecuador imports 710,000 MT of wheat annually, but only 33 percent comes from the United States, a marked difference compared to neighboring countries. Ecuador is a former favorite of the now defunct Canadian Wheat Board, which aggressively defended its market share there. Now USW representatives are working diligently to demonstrate the increased value to be found in U.S. wheat. A highlight in Ecuador was the tour of a cookie plant.

“We received many compliments on U.S. wheat quality,” said Vonderhaar. “But the buyers are definitely aware of weather issues that affect that quality from year to year and are very clear about their expectations for clean wheat.”

The journey’s final leg was to Chile, a country with a highly developed milling and baking industry constantly working to guarantee they receive the highest quality wheat at the lowest price. Chile imports an average of 845,000 MT annually, of which 45 percent comes from the United States. Major competitors include Canada and a resurgent Argentina, which is rapidly becoming a major exporter again since its government removed wheat export tariffs last year. The team met with several millers in Chile who were excited to show off their mills and quality laboratories.

The team members returned home with a greater appreciation for the nuances of overseas demand and USW’s activities to foster increased demand for their wheat.

“I am impressed with, and appreciate the strong personal friendships USW people have built within the region, said Vonderharr. “I want to make sure we are growing wheat that our Latin American millers and bakers demand.”

“USW has a complicated job promoting wheat around the globe as some customers are very receptive to their efforts, and some less so,” said Spates. “Hearing the millers emphasize the need for quality certainly reinforced my commitment to producing high quality wheat.”

“We have a responsibility to share with other farmers what we learned about the kind of quality our buyers expect from the United States,” said Tremain. “USW is vital in the promotion of our product.”

The team will report to the USW Board of Directors later this year. To see pictures from this and other USW Board Team trips, please visit the USW Facebook page at www.facebook/uswheat.

Latin America is facing great challenges, with extreme poverty and hunger being some of the…
END_OF_DOCUMENT_TOKEN_TO_BE_REPLACED
https://www.uswheat.org/wp-content/uploads/MOA-Logos.png 498 1157 Steve Mercer https://www.uswheat.org/wp-content/uploads/USW-Logo-Full-Color.png Steve Mercer2022-11-18 17:02:122022-11-18 17:02:12USW, Other U.S. Export Organizations to Collaborate in South America on Nutrition and Food Security Activities