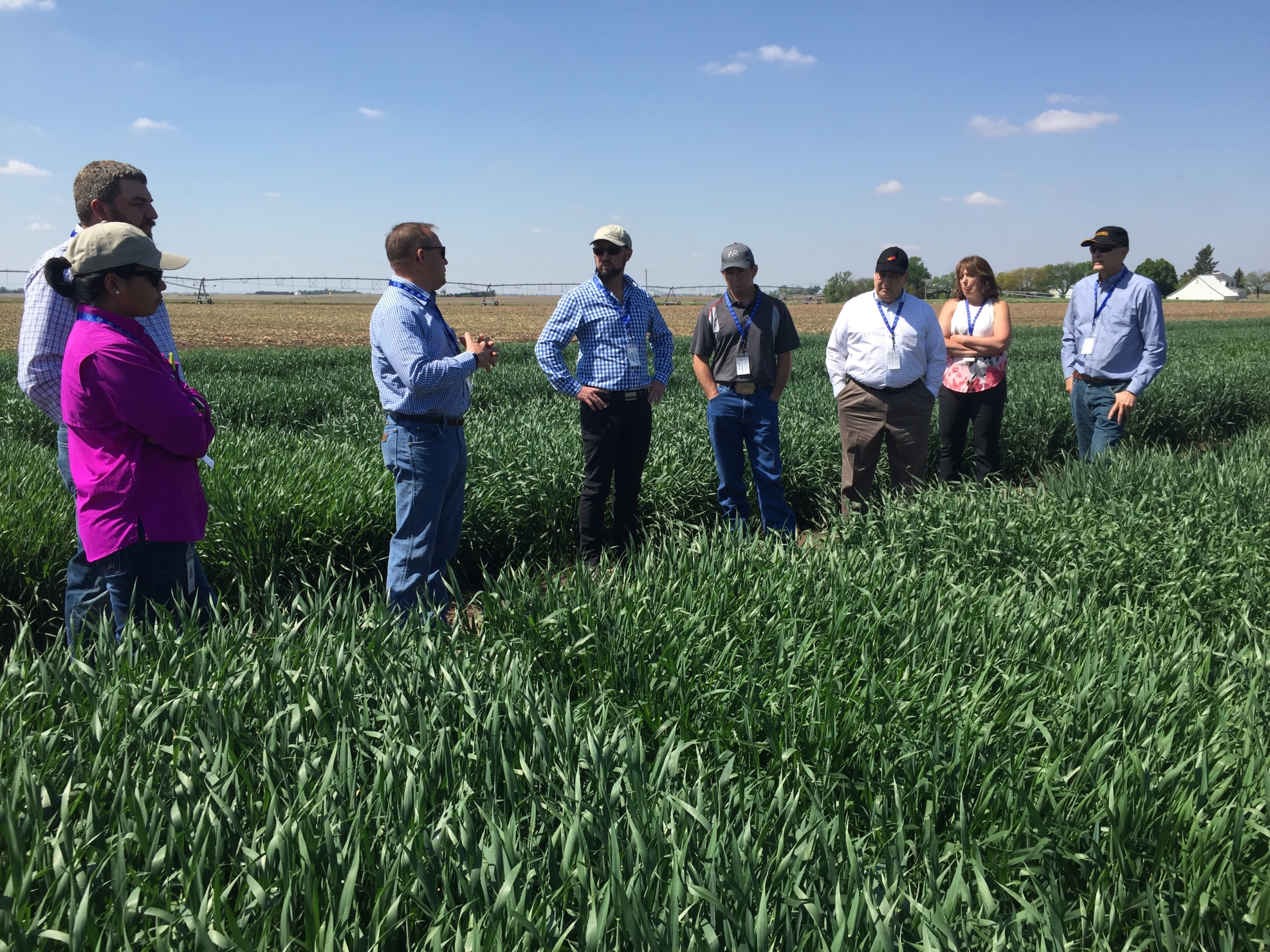 Several colleagues from U.S. Wheat Associates (USW) had a great experience on May 16 on a visit to Bayer Corporation’s main North American wheat breeding laboratory and nursery near Lincoln, Neb. They had a true look at the future, one that includes a more stable supply of high quality wheat for millers and wheat food processors around the world.

Bayer has made a substantial commitment to overcoming an age-old wheat breeding challenge: to develop and commercialize hybrid wheat.

The process of producing hybrid plant seeds can be simply described. Two distinct varieties of the same plant, each with unique characteristics are cross-bred. One plant has sterile female flowers, the other produces pollen and the fertilized plant produces a new, unique offspring.

But with a complex plant like wheat with three whole genomes in each cell and often 6 copies of each gene, that process is not easy. In fact, it was described as downright complex. Some of the scientists USW met with have worked toward hybrid wheat for more than 10 years. They say the work requires collaboration with a wide range of scientific disciplines; a true team effort. And the team at Bayer certainly represent that. They are focused on the hybrid goal, their comradery is quite evident and they are very excited about the potential of the work. The team includes experienced winter and spring wheat breeders, as well as plant pathologists who are testing new varieties for resistance to diseases like Fusarium head blight, or scab. Perhaps most important for the world’s U.S. wheat buyers, this team includes wheat quality specialists who are determining if new hybrid varieties meet or exceed grade and functional milling, baking and processing standards for the wheat class. If a new line does not meet or exceed standards, it is rejected.

Bayer and other public and private breeders are working toward hybrid lines for several reasons. Hybrid wheat demonstrates a productive yield increase. This is needed by farmers, especially small holder farmers, around the world to offset the currently limited profitability of growing single line wheat varieties. It is also needed to continue meeting record setting use of wheat by a growing global population. They see much more stable production levels across a variety of growing conditions with hybrid wheat. Hybridization also allows breeders to “stack” native and non-GM traits into wheat seed more precisely and efficiently than other breeding methods.

There is much work to be done, especially to screen and refine the new lines being produced, and it will be many years before hybrid wheat seeds are fully ready for farmers’ fields. However, the USW colleagues saw why the Bayer team is so enthusiastic about their work in the field trial plots around the Nebraska facility. What was described as a “radical transformation” of the tools available to conduct this complex research is accelerating the ability to bring new wheat lines to market. Most encouraging was the company’s willingness to incorporate into their work USW’s knowledge of what overseas millers, bakers and wheat food processors need to improve the quality of and demand for their end products.

USW wants to thank not only the Bayer team for their transparency and interest in our work with the world’s wheat buyers and users, but also wheat breeders around the world, who are working day and night to improve this staple crop for an increasingly hungry world.