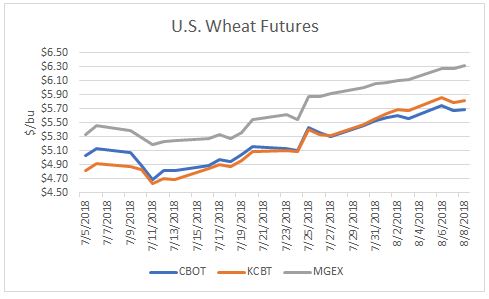 Wheat prices are in for a wild ride. Just last week, all it took to trigger a limit up move in futures prices was a rumor that Ukraine might restrict milling wheat exports. Although the market took back most of those gains after the rumor was retracted, Chicago soft red winter (SRW) futures ended the week up 5 percent while Kansas City hard red winter (HRW) climbed 6 percent and Minneapolis hard red spring (HRS) increased 3 percent.

That short-term volatility is indicative of how tightly wound global wheat markets are, and the next big price move could be triggered on Aug. 10 when USDA updates its monthly World Agricultural Supply and Demand Estimate (WASDE). We will look for factors that could trigger additional price moves including changes to production, export demand and world feed grain supply estimates.

Shrinking Global Wheat Production. A saying among wheat people suggests that at harvest, “big crops get bigger and small crops get smaller.” This seems to be a “small crop” year with analysts and traders alike expecting USDA to reduce world production estimates based on new harvest numbers from France, Germany, Poland and Russia. Current estimates from Stratégie Grains put EU common wheat production (excluding durum) below 130 MMT, down 8 percent year over year if realized.

The Russian Ministry of Agriculture expects 2018/19 Russian wheat production to total 64.4 MMT, down 25 percent from the year prior. According to analysts at IKAR, sprouting and disease pressure from late season rains further decreased Russian exportable supply. Australian wheat production may also be reduced as the region that produces Australian Prime Hard and Australian Hard wheat is experiencing “the worst drought in living memory.”

Ukraine. Each year, the Ukraine Agricultural Ministry signs a memorandum with grain exporters outlining an agreed volume of milling wheat trade not subject to government restriction. This year, the proposed volume is 8.0 MMT, down from 10.0 MMT exported in 2017/18. Milling wheat exports generally make up a little more than half of the country’s wheat exports. In July, USDA forecast Ukraine total wheat exports (milling and feed wheat) at 16.5 MMT, down 1.0 MT from 2017/18.

As we have suggested (Lower U.S. Wheat Prices Are an Anomaly and An Excellent Opportunity), U.S. and global wheat prices are sitting on a powder keg with an anticipated global stocks-to-use ratio (excluding China) of 19 percent, a level that has not been seen since 2007/08. Both U.S. and global wheat prices have rallied in recent weeks. Continued reports of quality damage and lower yields in the EU and Russia and drought conditions in Australia indicate the 2018/19 crop is shrinking. If last week’s limit up movement is any indication, wheat prices could go much higher very quickly if additional bullish news comes out.