The Food and Agriculture Organization (FAO), a branch of the United Nations (UN), in a biannual report published this month, said “the ratio of major wheat exporters’ closing stocks to their total disappearance is expected to fall to 12.5 percent.” The report also noted that, if realized, this will be the lowest level in more than two decades. From January to October 2021, wheat prices have been 29.1 percent higher compared to the same period in 2020 FAO reported.

An abstract by the Agricultural Market Information System (AMIS) confirmed that when global wheat inventories fall and the stocks-to-disappearance ratio dips below 18 percent, higher volatility will follow. All the major factors that affect volatility AMIS noted have made recent headlines and been exacerbated by higher oil prices, stock market volatility, foreign exchange rates and weather variability, the last being especially relevant to the 2021/22 wheat crop in the exporting countries Canada, Russia and the United States.

The stocks-to-disappearance ratio defined by the Organization for Economic Cooperation and Development (OECD) is the ratio of stocks held by exporters to their disappearance (domestic utilization + exports). Among major wheat exporting countries, domestic use strongly influences the export policies of Russia, Ukraine and Kazakhstan. Russia for example uses an export tax to keep domestic prices lower. The Russian government also uses export quotas to tame domestic wheat prices and has already announced plans to curb exports starting in February 2022. Ukraine and Kazakhstan have routinely used export quotas in the past.

USW Vice President and West Coast Office Director Steve Wirsching recently noted that the 2021/22 stocks-to-disappearance ratio for major exporters is 13%, similar to levels last experienced in 2007/08 when wheat prices were exceptionally high. That year, Russia had a good crop, but imposed a substantial export tax. Following a poor crop in 2010, Russia banned wheat exports completely until the next harvest. 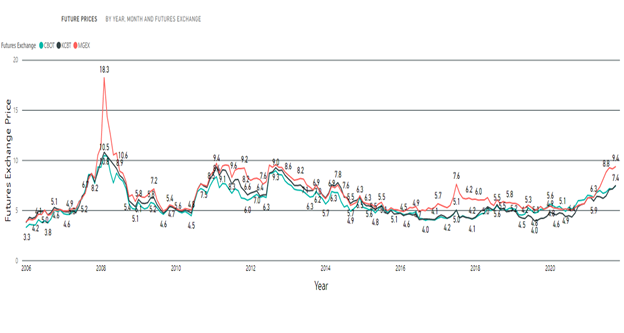 Volatility is evident in the periods when stocks-to-disappearance ratios among exporting countries were low in this chart of wheat futures prices from U.S. exchanges. For example, hard red spring prices (MGEX in red) in 2008 reached as high as $18.30/BU. That year was characterized by limited export supplies, strong international demand and low global wheat stocks.

Next week, USDA will release its latest supply and demand report, offering an updated forecast for major exporting regions. While the northern hemisphere crop is mostly in the bin, the southern hemisphere is beginning harvest now, and already concern is growing for the Australian wheat crop.

The Australian Bureau of Agricultural and Resource Economics and Sciences (ABARES) recently did raise its forecast for Australian wheat production by 1.4 MMT, up 4% compared to last year. However, a rainy harvest there is generating speculation about the volume of milling quality wheat. One trader noted “the mess that wet harvest weather has left us in.” In addition, the EU experienced a wet harvest this season that downgraded milling wheat to only 62% of the total harvest according to Stratègie Grains.

The volatility inherent in the 2021/22 marketing year has major importers going to great lengths to shore up supply as futures moved lower. This week, Egypt, the world’s largest importer of wheat, suddenly purchased 600,000 metric tons (MT) of the grain at nearly $90 per MT more than the average price paid for wheat tenders last year. The purchase is thought to be Egypt’s largest single wheat purchase ever and surpasses a previous record of a 540,000 MT Egyptian purchase in 2008.

Wheat markets have moved lower recently, but with the exporter stocks-to-disappearance ratio remaining low until at least closer to the 2022 Northern Hemisphere harvest, volatility is likely to continue.