Appropriately, the celebration of the 60th anniversary of USW’s office in the Philippines included the U.S. Ambassador to the country, representatives from USDA’s Foreign Agricultural Service (FAS) and the Executive Director of the Philippine Association of Flour Miller’s (PAFMIL).

The Nov. 18 event, which marked another milestone in an important relationship between U.S. wheat and one of its biggest and most dependable customers, came at the conclusion of the 2022 USW Crop Quality (CQ) Seminar in Manila – the first in-person CQ seminar since 2019. 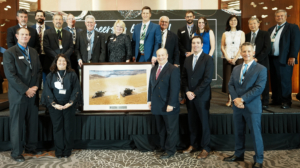 The USW team poses with one of the U.S. wheat harvest photos gifted by Past Chairman Darren Padget to Filipino flour millers during the 60th anniversary celebration of the USW office in the Philippines.

“It is fortunate and very fitting that we were able to get together with some familiar faces to celebrate the anniversary of our presence in the Philippines while also sharing information about the U.S. wheat crop,” said USW President Vince Peterson, who joined a large team of USW officers and staff at the Manila Marriott Hotel. “U.S. Wheat Associates and our legacy organizations have maintained an office here for six decades now for a very good reason. The flour millers in the Philippines rely on U.S. wheat to meet growing demand by consumers. And wheat farmers in the U.S. rely on Filipino flour millers who appreciate the high-quality wheat they grow.”

MaryKay Carlson, U.S. Ambassador to the Philippines, spoke about the significance of U.S. wheat in the region.

“Nothing symbolizes U.S. agriculture better than amber waves of grain,” Carlson told an audience. “We are pleased to make this important essential commodity available to our friends, partners and allies here in the Philippines.”

MaryKay Carlson, U.S. Ambassador to the Philippines, speaks during USW’s 60th anniversary celebration. Carlson emphasized the importance of the relationship between U.S. wheat and consumers in the country.

PAFMIL Executive Director Ric Pinca was among representatives of the Filipino milling industry on hand to congratulate USW. USW Chairman Rhonda Larson and Past Chairman Darren Padget participated, each sharing background on their farms and production practices. Padget presented local millers with framed photographs of a wheat field overlooking the Lower Monumental dam on the Snake River.

Three flour mills participated in the contest to design, bake and decorate a cake made with flour milled from U.S. soft white wheat and a variety of local fruits.

The Philippines is the second largest importer of U.S. wheat in the world. Over the past five years, Filipino flour millers have imported an average of more than 2.9 million metric tons of U.S. soft white, hard red spring and hard red winter wheat per year.