You are here: Home1 / Joe Sowers 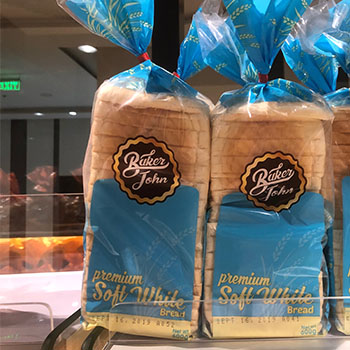 U.S. Wheat Associates (USW) is very pleased that the Tariff Commission of the Republic of the Philippines has extended anti-dumping duties on imports of wheat flour originating and exported from the Republic of Turkey until 2023. The commission’s ruling, announced Sept. 9, 2020, extended anti-dumping duties that were first imposed in 2014 after PAFMIL, the Philippine Association of Flour Millers, Inc., proved that Turkish flour imports threatened to cause material injury to the domestic milling industry. The decision marks the culmination of a decade-long effort by the Philippine flour industry to deter Turkey’s unfair trade practices and secure a fair and competitive market for wheat and flour trade.

USW and U.S. officials have been aware for many years that the Turkish government employs a complex, inward processing scheme that creates incentives for its milling industry to export flour regardless of price, distorting and disrupting flour markets around the world. In making its original case to the Philippine Tariff Commission, PAFMIL argued that the landed cost of Turkish flour was much lower than imported flour from other countries, lower than the prices of flour produced by the Philippine industry and, indeed, well below flour prices in Turkey. USW provided significant information on relative costs and other factors that supported PAFMIL’s case.

In 2014, anti-dumping duties of up to 16.19% were imposed on Turkish flour. Combined with the MFN tariff rate of 7 percent, the duties were enough to reduce imports of Turkish flour by more than 70 percent and allow the Philippine milling industry to increase production of flour needed to make high-quality Philippine wheat food products. The growth in demand for locally produced flour allowed mills to expand and helped smaller and independent Philippine flour milling companies to enter the growing market.

U.S. wheat farmers, who have had representation in the Philippines for 59 years, will also see benefits from PAFMIL’s effort. The Philippines is currently the world’s third largest wheat importer, with demand for wheat flour and milling wheat nearly doubling in the last decade. Its expanding population, coupled with increasing per capita income, has contributed to a surge in consumption of wheat-based products, especially bread, noodles, biscuits and cakes. The Philippine milling industry purchases nearly all its milling wheat from the United States for its quality and consistency. The impact of PAFMIL’s effort is clear with imports of U.S. hard red spring (HRS), soft white (SW) and hard red winter (HRW) wheat rising from 2.16 million metric tons (MMT) in marketing year 2015/16 to 3.58 MMT in 2019/20. 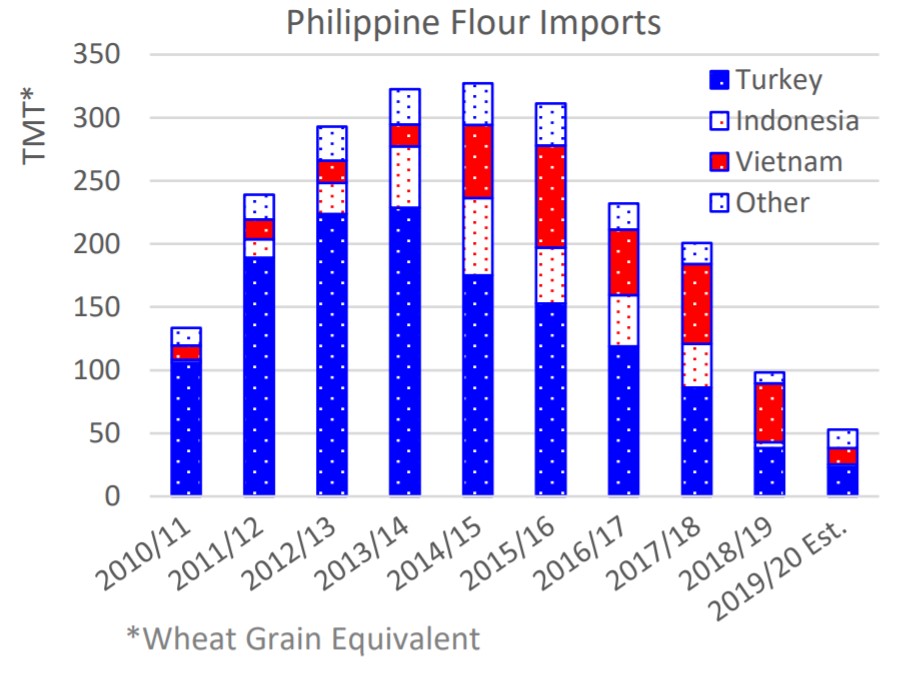 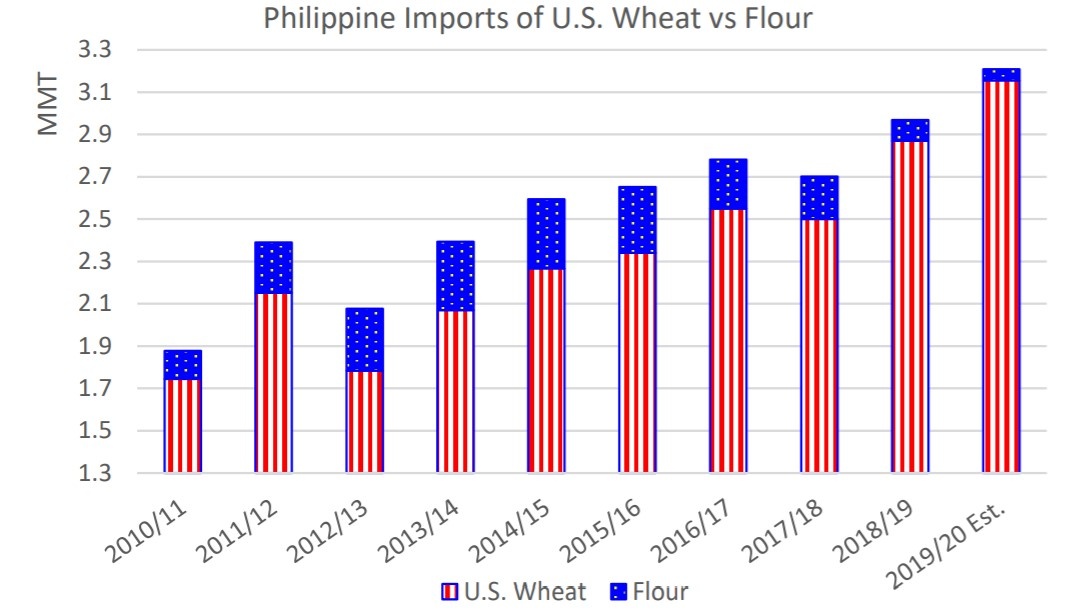 However, the original tariffs were set to expire at the end of 2019 and PAFMIL’s request for extension had to make the case that ending the tariffs would encourage Turkish exporters to target the Philippines again, increasing exports through their established dumping practices and, in turn, resume its threat to the Philippine milling industry.

PAFMIL’s successful petition to the Tariff Commission stated: “Once the duty is lifted, Turkish flour will come in at even lower prices and cause damage to the local industry. Extension of the anti-dumping duty will help these emerging independent Philippine flour millers to establish themselves and even expand such that the needs of the Philippine market for flour will be fully addressed.” After finding that Turkish exporters continued to dump flour in the Philippines during the period of investigation and would likely resume large scale exports should the duties be lifted, the Tariff Commission extended the anti-dumping duties for another three years, in fact increasing the top rate to 29.57 percent.

As an organization that believes in the value of a trade environment in which the participants compete fairly and openly, USW was happy to support PAFMIL’s request to reinstate the anti-dumping duties. And we were humbled by a recent letter from PAFMIL Executive Director Ric Pinca to our organization:

“I write to thank you for the support and encouragement the U.S. Wheat Associates extended … in our campaign for fair trade against the Turkish government and its wheat flour milling industry. It was a difficult and uphill fight, but we had the truth and your support behind us. With these, we never wavered in our confidence and we have been rewarded with a favorable ruling by the Philippine Tariff Commission … We couldn’t have gained this victory without your unceasing support, for which we are deeply appreciative and grateful.”