ARLINGTON, Virginia — U.S. wheat industry representatives from four states expected to answer a lot of questions from a team of Nigerian and South African flour milling executives, but they did not expect to learn so much from their customers. Their dialogue continued as the millers observed the entire U.S. wheat supply chain on stops in Nebraska, Kansas, Oklahoma, North Dakota and Minnesota June 18 to 29, 2017, as part of a trade team sponsored by U.S. Wheat Associates (USW) and wheat commissions from those states. Funding also came from the USDA Foreign Agricultural Service (FAS).

Gerald Theus, assistant regional director with USW in Cape Town, South Africa, led the team and noted two key reasons why this was a good time to emphasize the benefits of buying U.S. wheat.

“First, the price of imported milling wheat weighs heavily on buyers in Sub-Saharan Africa, and U.S. hard red winter (HRW) and other U.S. wheat classes have become more price competitive,” Theus said. “On the other hand, the millers are concerned about protein levels and other functional measures in the new crop. After the tour, we think they understand how to minimize their price risk and still get the performance they need from this U.S. wheat crop.”

Theus said consumers in Nigeria and South Africa prefer “high-loaf” pan bread, which is best produced with flour from medium protein wheat sourced mainly from the central and southern Plains states. Mike Schulte, the executive director of the Oklahoma Wheat Commission, said it was important for breeders, farmers and the grain trade to learn more about the specific quality and consistency these millers need.

“For example, they told us their baking customers need flour that provides minimum protein and dough stability time, but they cannot get consistent supplies like that from Russia.” Schulte said. “That helped us direct the discussion at our tour stops toward how the trade handles wheat to meet different specifications, and how the inspection system provides assurance they won’t have to make big and expensive adjustments from one delivery to another with U.S. wheat.”

“I was surprised about how U.S. wheat grading and testing is so comprehensive and consistent for every load of wheat coming from the farm by truck or rail to export locations,” said Hayi Emmanuel Dauda, quality assurance manager with Nigeria’s Dangote Flour Mills. “It was also good to see how the process of blending wheat from different sources achieves consistent protein levels and test weights for the buyer.”

“It was very informative to learn about the challenges of ensuring the current and future production of all the U.S. wheat classes,” said Tanya Erwee, a grain procurement executive with Premier Milling in South Africa. “The wheat breeders are doing a great job, still striving to get better yields to benefit the farmer but also to keep the quality benefits strong for millers, too.”

“We wanted to show these buyers that there is a chance this year to purchase spring wheat at relatively attractive prices to blend with hard red winter wheat to meet higher protein and stability times if needed,” said Theus. “For the Nigerian millers, we also wanted to demonstrate that northern durum could be an attractive alternative this year for pasta flour.”

Nigeria’s standard pasta flour is HRW with 12 percent protein (on a 12 percent moisture basis). There are limited supplies of that specification and the large supply of durum could be an alternative, said Erica Olson, Marketing Specialist with the North Dakota Wheat Commission.

“This team was valuable for us to host as they are not our typical customer,” Olson said. “While these are smaller markets for hard red spring and durum, interest in quality is growing. It was extremely beneficial to visit with them to learn more about what their quality needs are and how we might expand export opportunities in the future.”

In North Dakota, spring wheat and durum specialists at the North Dakota State University Spring Wheat Quality Laboratory and the Northern Crops Institute briefed the team members. From Fargo, N.D., the team traveled to their final stop at the ports of Duluth, Minn., and Superior, Wis., for meetings with private exporters.

“I must say the experience with the farmers, breeders, traders and other experts on this trip was second to none,” said Mr. Dauda. “What we learned from each other will be very important, particularly related to meeting the potential challenges associated with getting the protein levels we need.”

“This trip helps give us the confidence that U.S. growers, breeders, grading agencies and private exporters are committed in ensuring that quality standards of all wheat classes are met when exporting to other countries,” said Ms. Erwee. “The United States is still the exporter we can trust to supply good, consistent quality wheat.”

More Information About the Nigerian and South African Wheat Markets

With U.S. prices becoming more competitive — and with effective outcomes from USW’s training and trade service activities over many years — Nigerian mills bought significantly more HRW in marketing year 2016/17 (May to June) than in the previous few years. Nigeria imported 50 percent more HRW last year, a total of about 1.6 million metric tons (MMT), or nearly 58 million bushels. Much of that went to produce bread flour. There is also a growing pasta and instant noodle market that USW helped the Nigerian industry build over the years that provides consistent demand for higher protein HRW.

South Africa is a smaller market than Nigeria, but annual per capita wheat consumption of 63 kg is the highest in the Sub-Saharan region. Though it varies widely year to year, South Africa produces about 50 percent of its annual wheat consumption of 3.5 million metric tons (MMT). Wheat breeders and flour millers there are working together to develop improved protein varieties for South African farmers so it can be blended with imported wheat.

Millers prefer imports of HRW and similar classes of German and Argentinian wheat and tend to buy more of whatever is available at the least cost. U.S. HRW was much more competitive in marketing year 2016/17. In fact, South African millers imported HRW for the first time in five years. Millers there imported the most total U.S. wheat since 2007/08.

USW’s mission is to “develop, maintain and expand international markets to enhance the profitability of U.S. wheat producers and their customers.” USW activities in more than 100 countries are made possible through producer checkoff dollars managed by 18 state wheat commissions and cost-share funding provided by USDA’s Foreign Agricultural Service. For more information, visit our website at www.uswheat.org.

Header Photo Caption: Flour milling executives from Nigeria and South Africa met with representatives from the wheat supply chain in Oklahoma during a trade team visit to the United States in late June, sponsored by U.S. Wheat Associates and state wheat commissions from Oklahoma, Kansas, Nebraska, North Dakota and Minnesota. Caption: Flour milling executives from Nigeria and South Africa met with the Kansas Wheat Commission in Manhattan, Kan., and representatives from the state wheat supply chain during a trade team visit to the United States in late June, sponsored by U.S. Wheat Associates and state wheat commissions from Oklahoma, Kansas, Nebraska, North Dakota and Minnesota. 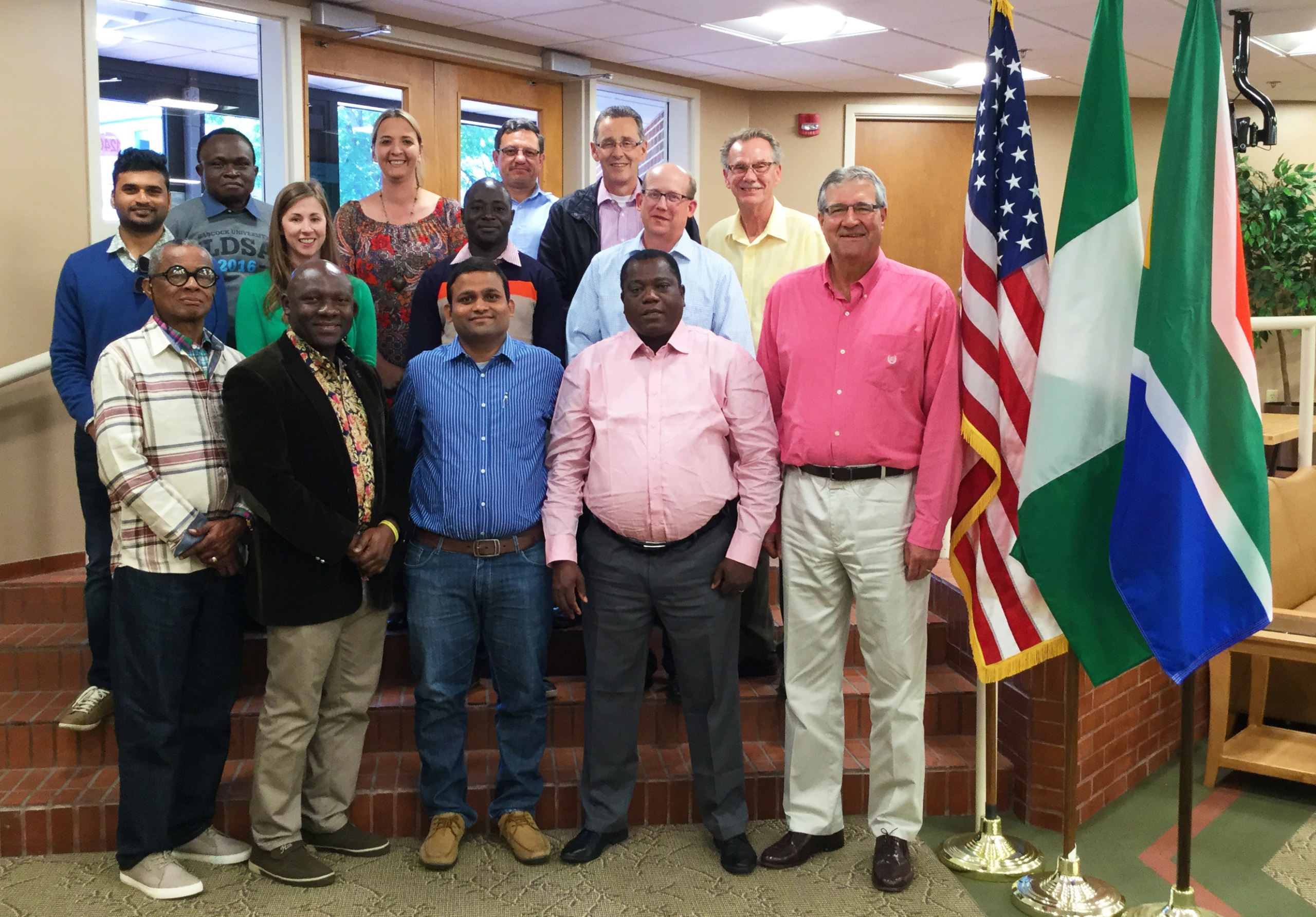 Caption: Flour milling executives from Nigeria and South Africa learned about the timely benefits of hard red spring wheat and durum at the Northern Crops Institute, Fargo, N.D., and in meetings with representatives from the wheat supply chain in North Dakota during a trade team visit to the United States in late June, sponsored by U.S. Wheat Associates and state wheat commissions from Oklahoma, Kansas, Nebraska, North Dakota and Minnesota.