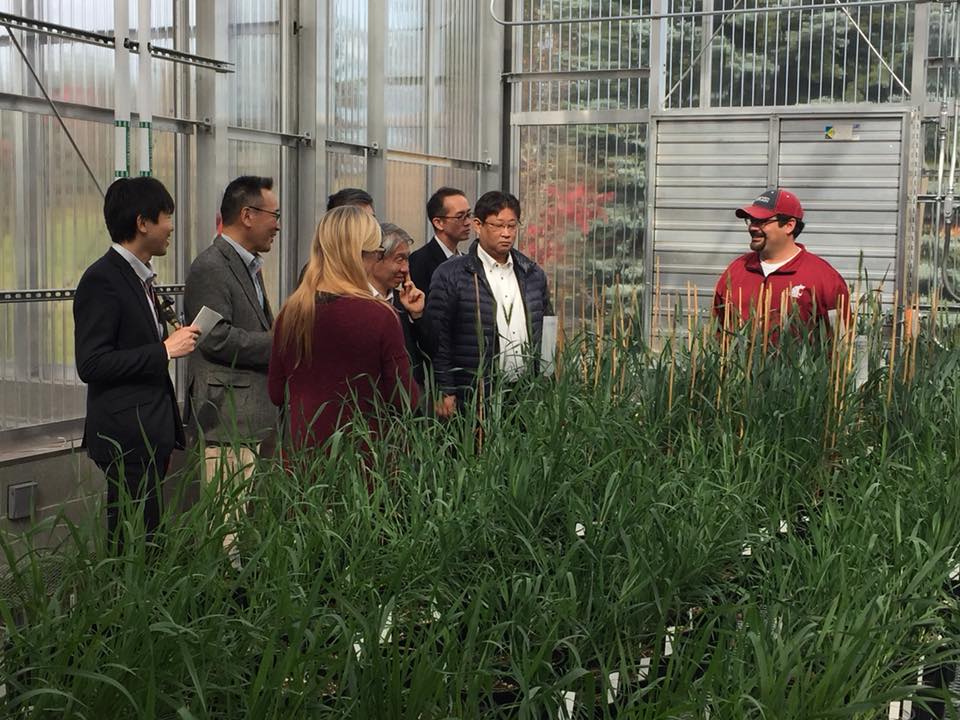 Even though Japan has imported more than half of its annual milling wheat needs from the United States for many decades, the market requires constant attention in an increasingly competitive world wheat trade environment. U.S. wheat farmers are doing that in part by building relationships with future senior managers in Japan’s milling industry.

With the support of U.S. Wheat Associates (USW) and export market development programs administered by USDA’s Foreign Agricultural Service, the Washington Grain Commission (WGC) and the Oregon Wheat Commission (OWC) hosted a team of four Japanese flour milling managers and the managing director of the Japanese Flour Millers Association Oct. 8 to 12, 2017. These managers are from companies that produce almost 80 percent of all the flour consumed in Japan. The visit reinforced the ways in which the entire U.S. supply chain is working to constantly improve the quality, performance and value of the wheat these customers need.

“This was an excellent team,” said WGC CEO Glen Squires. “They were looking at our wheat and supply system with the perspective of having more authority and responsibilities in their positions.”

“Producing and exporting high quality wheat is no accident,” said USW Vice President and West Coast Office Director Steve Wirsching. “It is a process that requires tremendous investment and effort by a team of wheat breeders and cereal scientists. We showed these millers that farmers in the Pacific Northwest have invested heavily in varietal development that is paying dividends.”

That message came through quite clearly.

“Our visit with the wheat breeders at Washington State University and with the staff at the Western Wheat Quality Laboratory was a very good reminder that there is much work being done to develop new and improved varieties of both soft white and club wheat development,” said Mr. Koji Ishizuka, Manager, Quality Control and Assurance Group, Nisshin Flour Milling Inc.

Club, a sub-class of soft white, is an essential component of the Western White wheat blend that Japan buys more of than any other importers. Mr. Ishizuka and the rest of the team also visited the HighLine Grain facility in East-Central Washington, which draws a significant amount of club wheat from area farmers.

With additional stops in Washington, including time with USW Chairman and Ritzville, Wash., wheat farmer Mike Miller, and to grain handling systems in Portland, Ore., the team essentially followed wheat from production to export. In Portland, the millers met with the Japanese Importers Association, OWC staff, WMC and Overseas Merchandise Inspection Company (OMIC). Federal Grain Inspection Service (FGIS) inspector Kim Harper put on a mini-grain grading seminar to demonstrate how the federal agency objectively certifies the integrity of wheat relative to the buyer’s contract as it is loaded on a vessel.

“The skill of the inspectors and their ability to identify potential issues with wheat is reassuring,” Mr. Ishizuka said.

According to the Japanese Flour Millers Association, per capita annual wheat consumption has grown sharply, from 56.7 pounds in the 1960s to 73 pounds today as the Japanese diet has become more diversified. Japanese consumers now spend more of their income on bread products than rice.

The Japanese domestic milling and baking industries are highly advanced and fully automated, and demand consistently high-quality wheat. They must address concerns from an increasingly sensitive consumer base on issues such as pesticides, allergens and biotech products. However, the Ministry of Agriculture, Fisheries, and Forestry (MAFF) carries out milling wheat purchases and sells the wheat to Japanese flour mills. The managers on this team will be in position to provide periodic information to the MAFF officials on their needs, based on the strict characteristics their bakery customers demand. The Japanese grain trade acts as intermediaries between MAFF and overseas sellers, and OMIC USA, in Portland, OR, provides testing and inspection services.

USW’s mission is to “develop, maintain, and expand international markets to enhance wheat’s profitability for U.S. wheat producers and its value for their customers.” USW activities in more than 100 countries are made possible through producer checkoff dollars managed by 17 state wheat commissions and cost-share funding provided by USDA’s Foreign Agricultural Service. For more information, visit our website at www.uswheat.org.