As a new decade and a new future for wheat export market development dawned in January 1980, the urgency facing the wheat-producer boards of both Great Plains Wheat and Western Wheat Associates could not have been much greater.

They were under the strain of discussions and negotiations for months in the effort to merge the two existing regional wheat market development groups into one, single national association. Then, on January 4, these farmer leaders and all U.S. wheat producers sat in disbelief hearing President Jimmy Carter address the nation and summarily cancel 17 million metric tons (MMT) of existing wheat, corn and soybean sales contracts between U.S. exporters and the former USSR. That was 17 MMT of production that had already been grown and harvested and scheduled for movement by truck, barge, rail car and ocean vessels through the U.S. grain export system; 17 MMT of system revenue, margins and farmers’ annual income – all cancelled.

In announcing this action and a longer-term grain embargo as sanctions against the Soviet Union’s invasion of Afghanistan, the President promised protection to farmers. He also said he had faith that our competitors would not exploit the opportunity to take up the cancelled U.S. sales. Never was such a naïve assumption more foolishly made. Spurred on by the unfilled Soviet demand, export origins in Europe and South America were quite literally handed a windfall on a silver platter. It is hard to criticize them for taking up that opportunity, but that was the spark for many of them that launched them into a new permanent place as competitors of the United States in the export market. 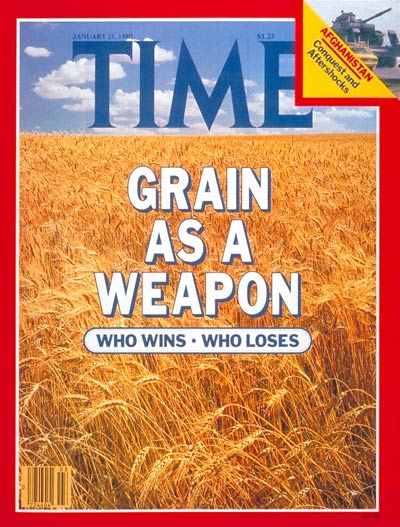 A crisis was at hand and it was becoming clear that no action of the government was going to heal the long-term financial damage and repair the loss of export markets suffered on that day. Those making an honest historical analysis can fairly claim that the next 20 years of high inventories, stagnant prices, booming farm programs and an export subsidy war all had their roots firmly planted in that one single policy decision.

The newly founded U.S. Wheat Associates (USW) had more than its hands full as a national market emergency now far outpaced any internal issues that may have seemed monumentally disagreeable during the merger discussions. Those were now just minor bumps in the road by comparison to the tasks in front of them. Ultimately, USW’s new leaders and staff fought hard to replace the lost export sales, build a reputation for reliability and create a more conducive policy environment for global trade.

One of the longer-term benefits to the U.S. wheat industry and its domestic and overseas customers that came out of this very difficult time originated in a very simple thought and demand: “This can never be allowed to happen again.” The U.S. grain export industry from farm to port were all completely unified in the pursuit of legal protection from an action of this nature for all time. These political efforts were successful. The U.S. Congress eventually passed, and the President signed, new contract sanctity laws which, short of a national emergency or war, precluded even the President from canceling any pre-existing grain export sales contacts.

The implications of this important protection echoes through the years to today, a new time of global crisis and uncertainty in the face of the coronavirus pandemic. Selfish hoarding is causing shortages and prices to rise. To combat that, some countries retreat behind protectionism to limit, tax or cut off exports in order to secure their own domestic supplies and hold down inflationary prices at home – with little apparent concern about the effects their actions will have.

Today, very concerned import-dependent countries are rightly asking: “Are there adequate supplies of wheat in the United Stated to cover all of our demand? Is there hoarding or a price shock? And, will our vessels be loaded?”  We are quite humbled and yet proud to be able to tell them yes, there is plenty of wheat available. In the commercial market, there is no hoarding and prices remain relatively low during this time. Perhaps most importantly, as opposed to governments that hide from global obligations, the U.S. government has declared the entire U.S. food industry, from farm to table and to export, to be essential services. We are also very pleased to know USDA’s agencies that handle grain inspection and phytosanitary compliance and certification are committed to making every effort possible to maintain those services to both domestic and export markets during this time.

As for the export taxes that some countries are so quick to consider and employ as the easy tool to control their own domestic market and economy, our country’s founders took care of that issue for us in 1787 when they wrote the Constitution of The United States of America. Article I, Section 9, Clause 5 states that “No Tax or Duty shall be laid on Articles exported from any State.” No export taxes. Period.

Situations such as the Soviet Grain Embargo and, perhaps, the coronavirus pandemic, while very difficult to experience and understand, can provide lessons and new policies that continue to serve wheat farmers, our country’s export supply industry and our customers securely and quite well.

Today, in part because of what happened back in 1980, the U.S. wheat store remains open, equally and fairly to all market participants at home and abroad.