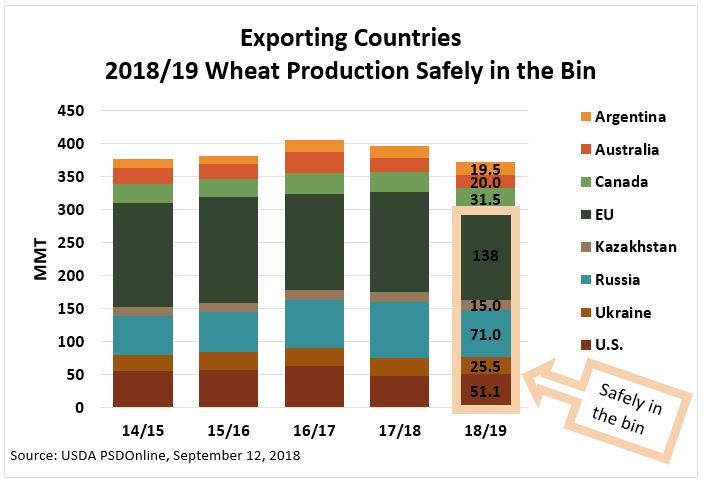 USDA expects global wheat production to fall to the lowest level in 5 years at 733 million metric tons (MMT), down 3 percent from the record high of 758 MMT in 2017/18. If realized, it would be slightly below the 5-year average. This downturn is, unfortunately, led by decreasing supplies in historic wheat exporters. At the same time, USDA raised its forecast for global wheat consumption to a record high 746 MMT, up 1 percent from 2017/18. To help buyers stay up to date on this fundamental information, U.S. Wheat Associates (USW) is providing this round-up of current conditions and forecasts for Canada, Argentina and Australia. 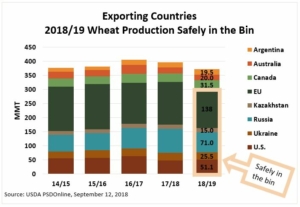 The estimated wheat production in countries still harvesting adds only a small portion of the 2018/19 supplies in exporting countries, and the total is expected to be down for the second year in a row

Canada. Winter is here, if you farm in Alberta and Saskatchewan that account for roughly 70 percent of Canadian wheat production. Provincial weekly crop reports on Sept. 11 noted harvest delays from early frosts, wet field conditions and, in some areas, snow. We do not yet know the extent of any damage to wheat quality from these conditions, but it raises concern because more than half of the spring wheat in the two provinces was still in the field. Harvest was an estimated at 23 and 46 percent complete in Alberta and Saskatchewan, respectively.

Argentina. According to the Bolsa de Cereales, the Buenos Aires Grain Exchange, Argentine farmers saw prices staying at profitable levels and planted 7 percent more wheat area for 2018/19. Since planting, the Argentine government announced an export duty of 4 pesos per dollar on wheat exports with its effects to be determined. Bolsa estimated total wheat planted area at 15.1 million acres (6.1 million hectares), up from 14.1 million acres (5.7 million hectares) in 2017/18.

On September 13, Bolsa reported beneficial moisture fell on the La Pampa region and areas around Buenos Aires. However, rainfall has been low in northwestern Argentina, which accounts for roughly one-third of wheat planted area. USDA’s September estimate for 2018/19 Argentinian wheat production was 19.5 MMT (716 million bushels), up 8 percent from 2017/18 and 35 percent greater than the 5-year average. Argentina harvest typically occurs in late November through early January.

Australia. The Australian Bureau of Agricultural and Resource Economics and Sciences (ABARES) forecasts 2018/19 wheat production at 19.1 MMT. That is down 10 percent from 2017/18 due to severe drought in New South Wales and Queensland, where Australian Prime Hard (APH) and Australia Hard (AH) production is centralized. Increased wheat production in Western Australia may partially offset the lower production elsewhere. Still, if realized, production volume would be the lowest since 2007/08. Australian wheat harvest typically occurs in December. USDA expects Australian exports to decrease to 14.0 MMT, 21 percent below the 5-year average.

With global wheat supplies tightening and global demand on the rise, customers should pay close attention to crop conditions in these countries. Even if early snows or drought cut supplies there, or a government intervenes in the market somewhere else, U.S. farmers remain the most reliable suppliers of high quality wheat in the world.