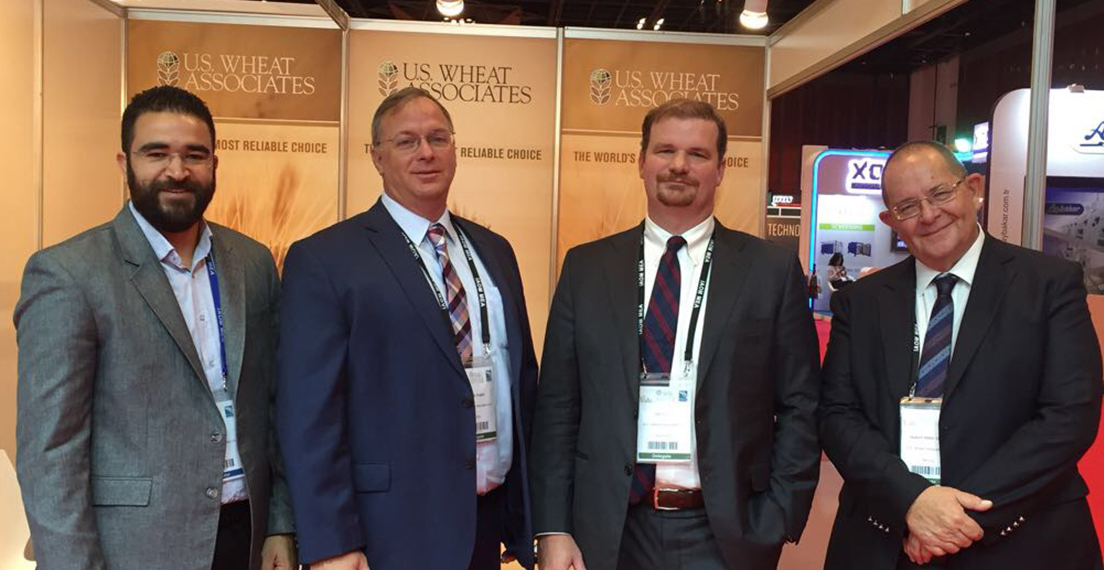 Editor’s Note: This is the fifth in a series of posts profiling U.S. Wheat Associates (USW) technical experts in flour milling and wheat foods production. USW Vice President of Global Technical Services Mark Fowler says technical support to overseas customers is an essential part of export market development for U.S. wheat. “Technical support adds differential value to the reliable supply of U.S. wheat,” Fowler says. “Our customers must constantly improve their products in an increasingly competitive environment. We can help them compete by demonstrating the advantages of using the right U.S. wheat class or blend of classes to produce the wide variety of wheat-based foods the world’s consumers demand.”

Providing Service to: North Africa and the Middle East 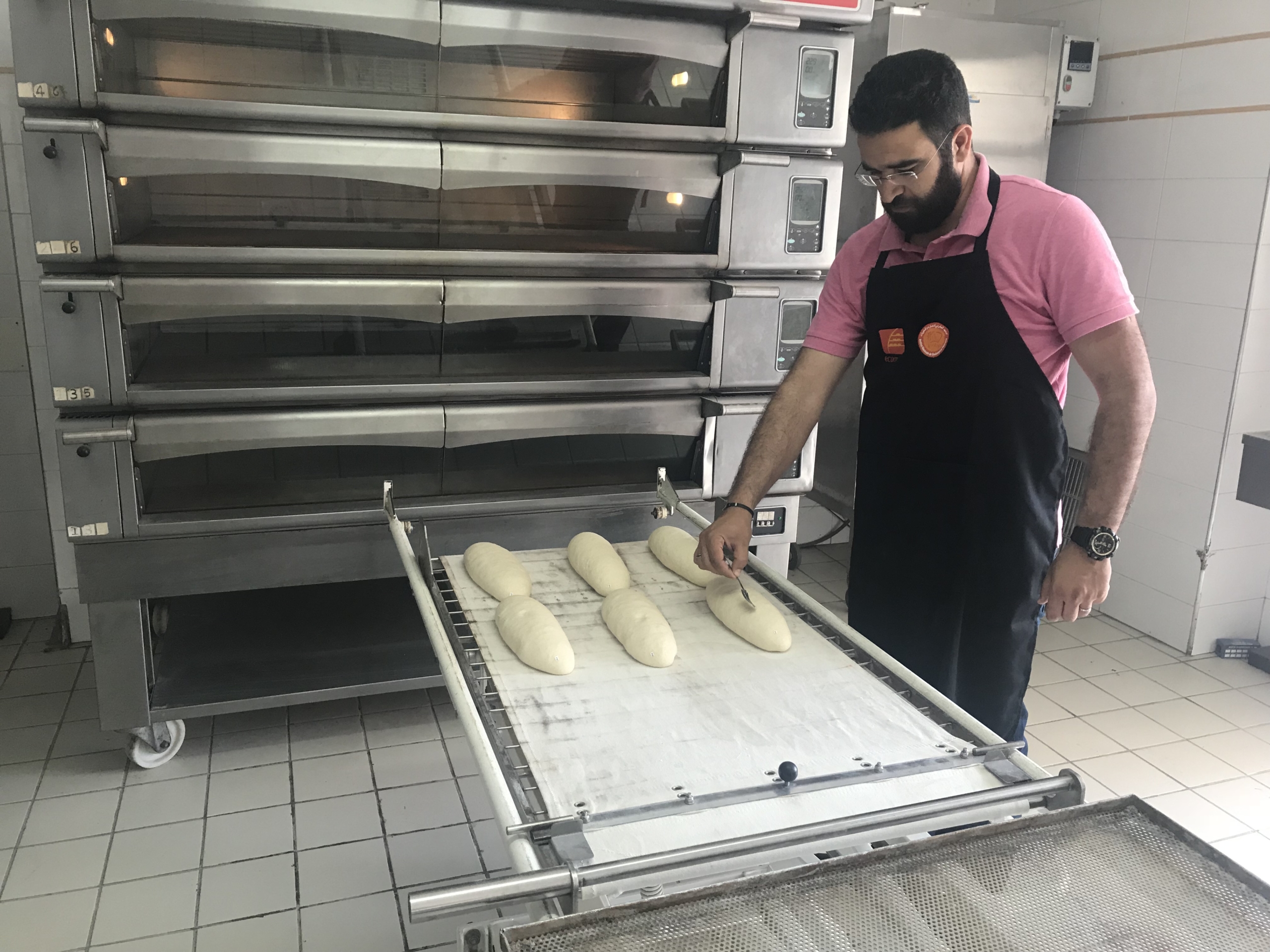 U.S. Wheat Associates (USW) Milling and Baking Technologist Tarik Gahi has spent his entire career working with millers from around the world. But the first person to really make his career a passion was his own mother.

“The main element on the breakfast, lunch and dinner table in Morocco is bread. Growing up my role at home was to follow my Mom’s instructions while helping her turn the wheat into bread. We would weigh 100 kilograms of the wheat stored in the roof, which was carefully hand cleaned, water washed and spread under the day sun for two days to dry out,” said Gahi. “Then I would to take it to a traditional flour mill – meters from our house – and pass on the message that Mom sent with me: ‘Please make the flour coarser and separated from the bran.’ Because if you didn’t ask for it, the worker at the mill would produce whole wheat flour, and my Mom didn’t want the additional job of separating the bran. Without being aware of it, she was a miller.” 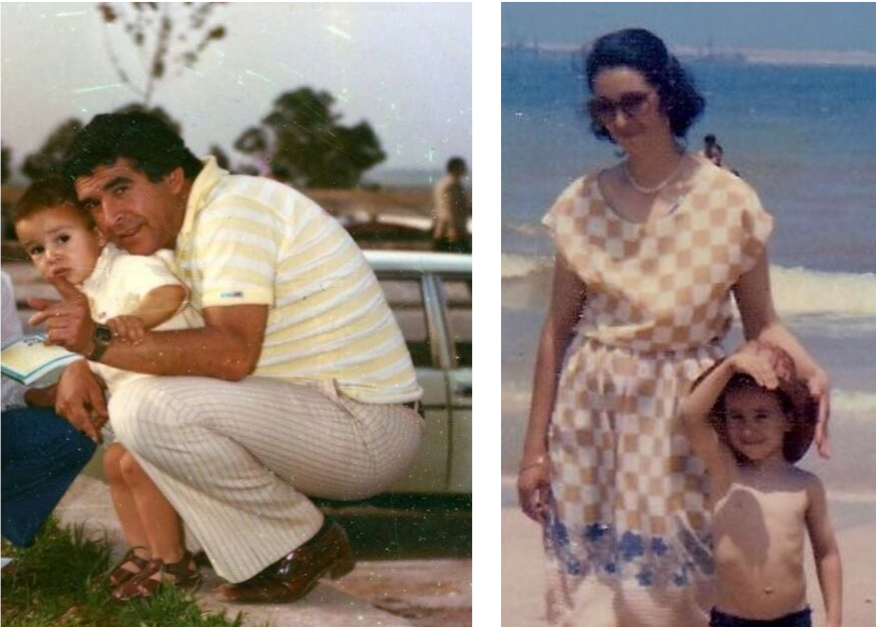 Gahi grew up in Beni Mellal, a small city in Morocco at the base of Taseemit Mountain and near the plains of Tadla, a region known for its olive, wheat and orange production. He and his two sisters were raised by their father, a philosophy teacher and later a school director, and mother, a homemaker. Growing up, math was Gahi’s favorite subject, so he pursued and received a bachelor’s degree in mathematics from Ibn Sinaa School in Beni Mellal, Morocco. When trying to decide what to pursue next, Gahi turned to his uncle, who had previously been the president of the first wheat importing group after the Moroccan wheat market liberalization in the late 1990s. His uncle introduced him to the Moroccan Milling Training Institute (IFIM) and shared with him something that he would never forget.

He said, “Tarik, if you ask any Moroccan in the street why he wakes up every morning and goes to work, his answer is always going to be “for a piece of bread, son”. This means that wheat, flour and bread are in our blood, and any business related to these three may lose at times, but never dies.”

Following his uncle’s advice, Gahi studied milling engineering for two and a half years at IFIM, where he was introduced to USW, seeing its logo displayed throughout the school and meeting USW Regional Technical Director Peter Lloyd. After graduation, the top five students from the class, including Tarik, were offered a job in the United Arab Emirates (UAE) with Al-Ghurair, one of the largest milling companies in the Middle East.

“At Al-Ghurair I learned to be patient and never under estimate the people around you, no matter what their position,” said Gahi.

After six years with Al-Ghurair, Gahi worked as a mill operation manager at Seaboard West Africa Limited in Sierra Leone for two years, which challenged his managerial skills and taught him the importance of building relationships with customers. Next, Gahi decided to return to his home country and served as a chief miller at a milling company in Casablanca for three years before finally joining USW in 2015. 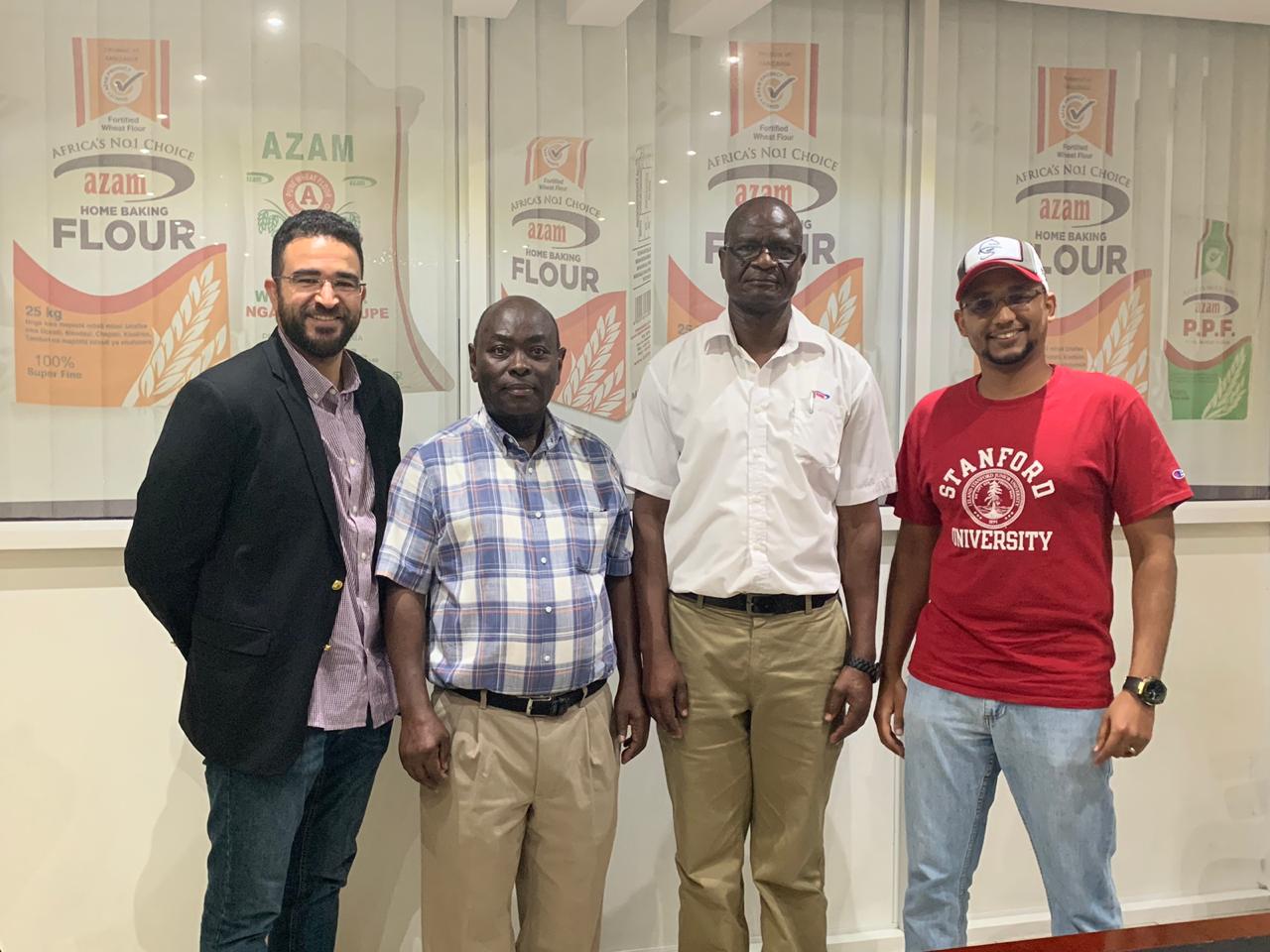 2019 – Visiting Bakhresa Group in Tanzania for a trade servicing activity. Beside Tarik (far left) is Peter Muni, current Bakhresa group technical vice president and Gahi’s past colleague from their time together at Al Ghurair Group in UAE.

An Ambassador for U.S. Wheat.

“That marked my professional life a lot. The USW logo was engraved in my mind from my time at IFIM,” said Gahi. “I learned the basics of milling in a school built by USW and to come back and work with the man who helped train me (Peter Lloyd), was something special. To technically convince people to use a product (wheat) that is a beautiful story for me is a job that I want to do for the rest of my life. My story is with U.S. wheat.”

As a Milling and Baking Technologist, Gahi is involved in the development, service and expansion of technical service for U.S. wheat and wheat products. He conducts cake and cookie courses in USW’s Middle East and North Africa (MENA) region, inviting major regional soft wheat flour users to share with them the quality of U.S. soft wheat and demonstrate its functionality as an ingredient. 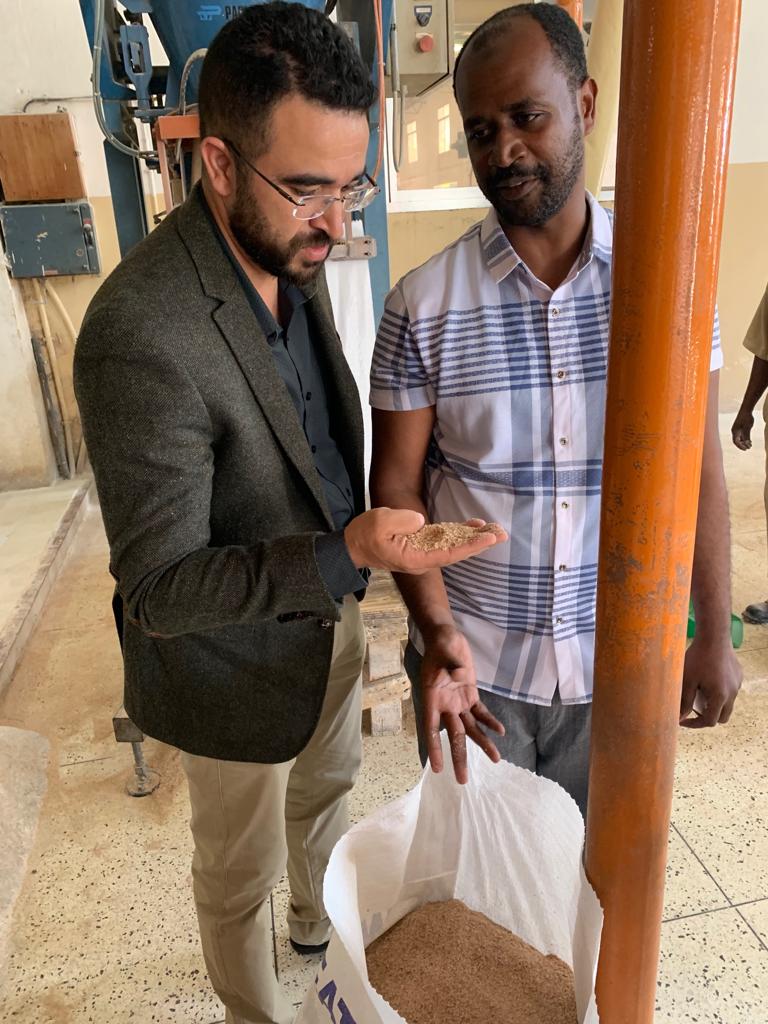 2019 – Touring the Bakhresa Mill in Zanzibar, Tanzania and answering one of the chief miller’s questions about flour extraction and bran.

The MENA region is a wide geographic area and is made up of widely differing milling and baking industries. From bakers in large cookie processing companies in Egypt, to large flour mills in the UAE, North and West Africa, Gahi is equally at home carrying the message of what benefits U.S. wheat can provide to customers.

“My job is to represent U.S. wheat growers in our region and USW provides the necessary tools and conditions to help me pass on the farmer message to both existing and potential customers,” said Gahi.

Through QSP, the same program that Gahi encountered in his first milling training, he now trains other young millers in processing U.S. wheat and helps introduce bakers and biscuit manufacturers to the right flour ingredient for their products.

“Tarik has a really good basic grounding in flour milling technology, upon which he has added layers of technical experience both overseas and in Morocco,” said Lloyd. “He has worked in both large and small mills, both new and older plants and has furthermore added layers of mill management, quality control and baking expertise to his basket of skills.” 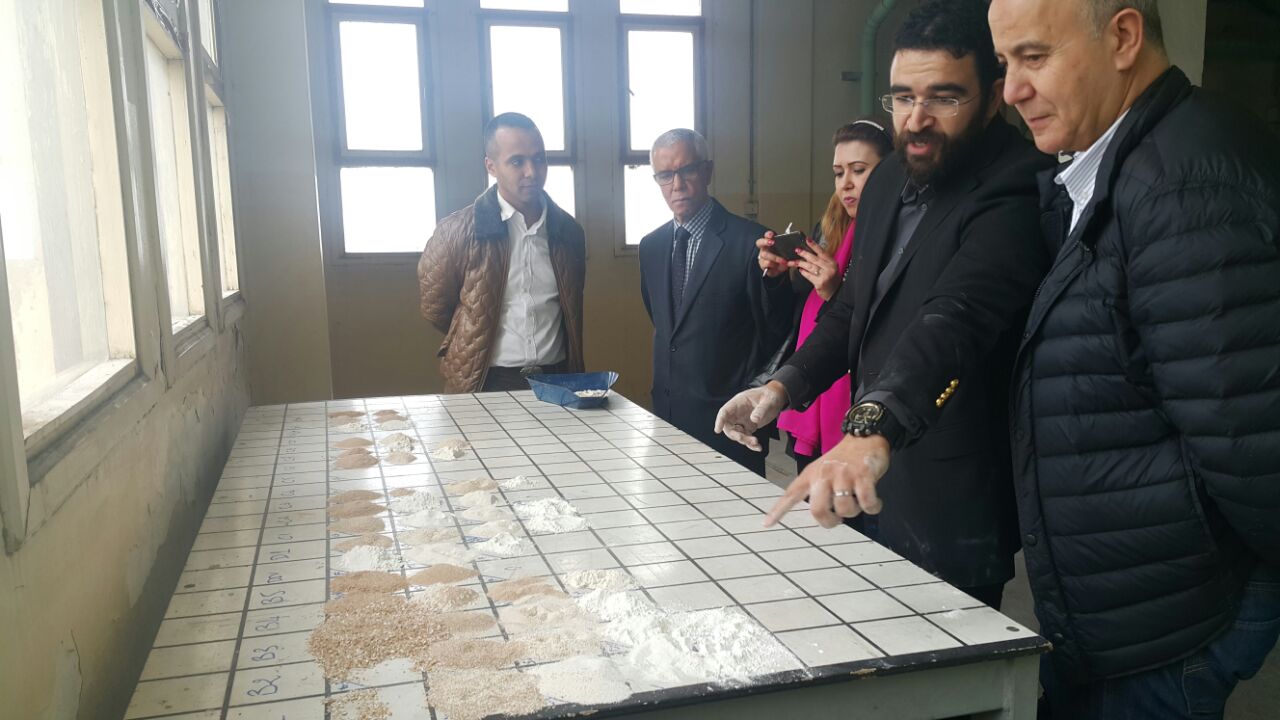 Tarik Gahi explains variations in a QSP sample during a training at IFIM in 2018.

“Tarik is doing a great job providing technical support,” said a research and development regional manager with a large snack food company in Morocco. “He brings positive and great values to the baking industry through his regular visits and always supports us when needed. We have benefited from his bakery seminars and biscuit trainings.”

Gahi also spends time meeting with bakers and millers across the MENA region to get updates on each country’s market and help troubleshoot their technical problems. These meetings give him the opportunity to build stronger relationships among U.S. wheat customers and helps identify new needs and possible customers in each market.

“Gahi brings a lot of clarification and precious advice to cereals professionals along the supply chain by emphasizing the advantages of U.S. wheat, compared to other origins, and helps them adapt their practices to extract the most value. And he does that all in three languages,” said a supply chain manager with a grain agency in Algeria. “It is a great honor to work and collaborate with Tarik. His value is characterized by a great education, a great dedication in his work and a developed professional sense, which all make him an excellent ambassador for U.S. wheat.”

As his mentor, Peter Lloyd has watched Gahi interact with customers and how his unique blend of skills as a “people person” and his ability to communicate in English, Arabic and French has had a positive impact across a range of cultures and markets.

“A major part of the job is the ability to communicate effectively across a very wide range of people, from millionaire industry giants to cleaners in a mill – and here Tarik once again excels,” said Lloyd. “He has an innate ability to communicate with people in our region, putting all at ease, and most importantly – listening effectively. He is just a great guy to work with.”

Lloyd is very proud that as his student and now colleague and understudy Gahi has become a part of the legacy Lloyd will eventually leave behind.

“As the person who has helped introduce Tarik to U.S. Wheat Associates, and perhaps worked more closely with him than anyone – I can say that the future of technical support into the MENA region, and across Africa is in excellent hands with Tarik.”

For Gahi, who enjoys playing chess and cycling in his free time (though he says he is tired of being beaten every time he plays chess), family is his most important interest. He is a husband and a father of two small children, but family will always be also woven into his passion for his career. 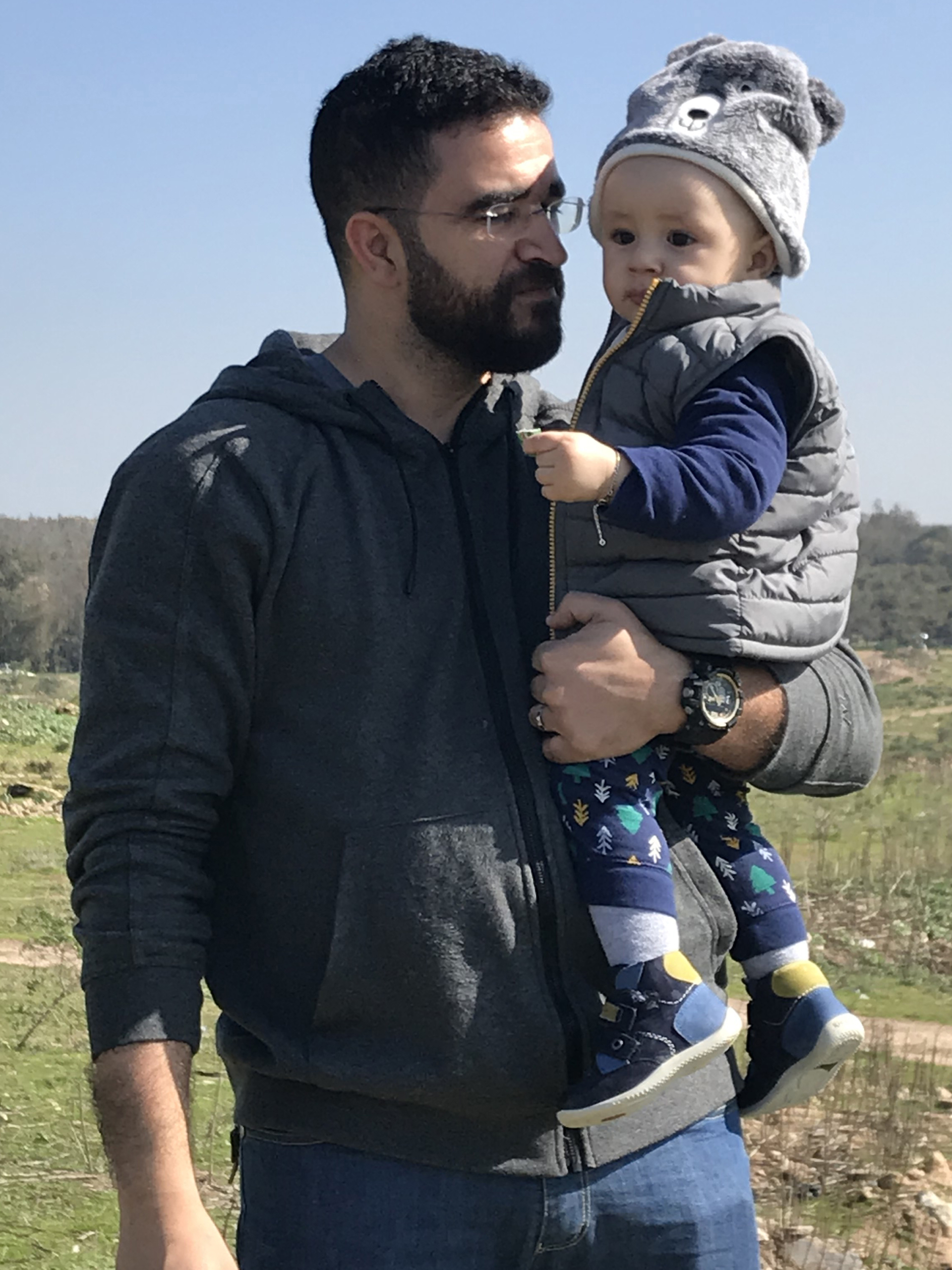 Tarik and his son.