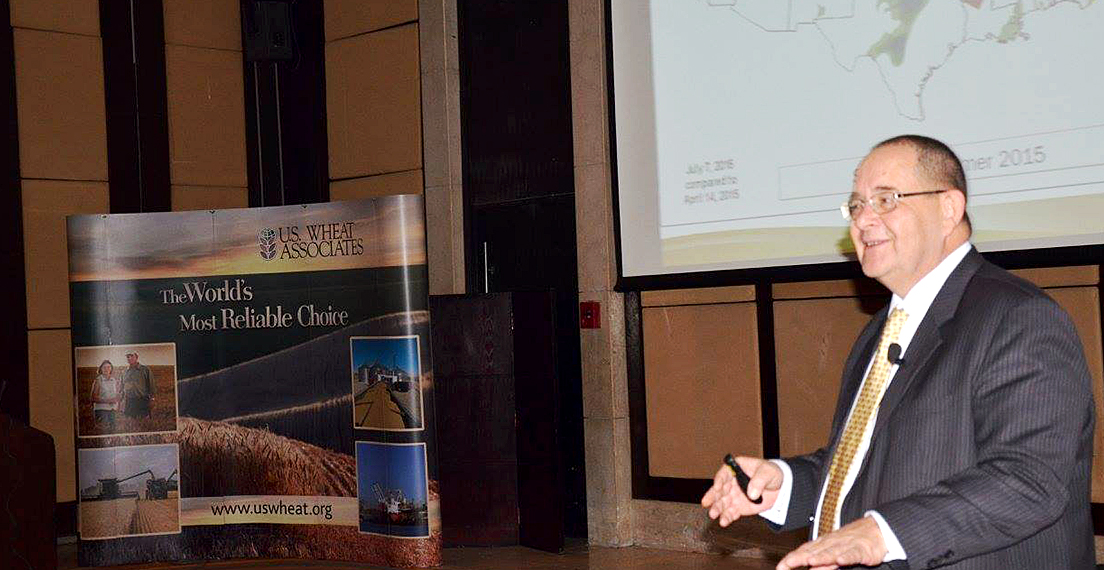 Providing Service to: North Africa and the Middle East

Lloyd, who was with U.S. Wheat Associates (USW) colleagues gathering information on new U.S. wheat export opportunities, said: “there is no end to that plant’s potential in soft wheat product development.”

That is strong praise coming from someone who has designed, serviced, and visited more flour mills worldwide than he can count. Lloyd’s USW title of Regional Technical Director does not do justice to his global responsibilities. Based in USW’s office in Casablanca, Morocco, Lloyd travels the world to conduct technical support that helps prove the value of U.S. wheat in the customer’s mill.

“I believe the work I do and that my USW colleagues and consultants do brings the greatest value where it makes the most difference — on the bottom line profit for a supply chain manager, miller or baker,” Lloyd noted. “A clear knowledge of the customer’s business is also vitally important to opening the door to U.S. wheat farmers as valued suppliers.” 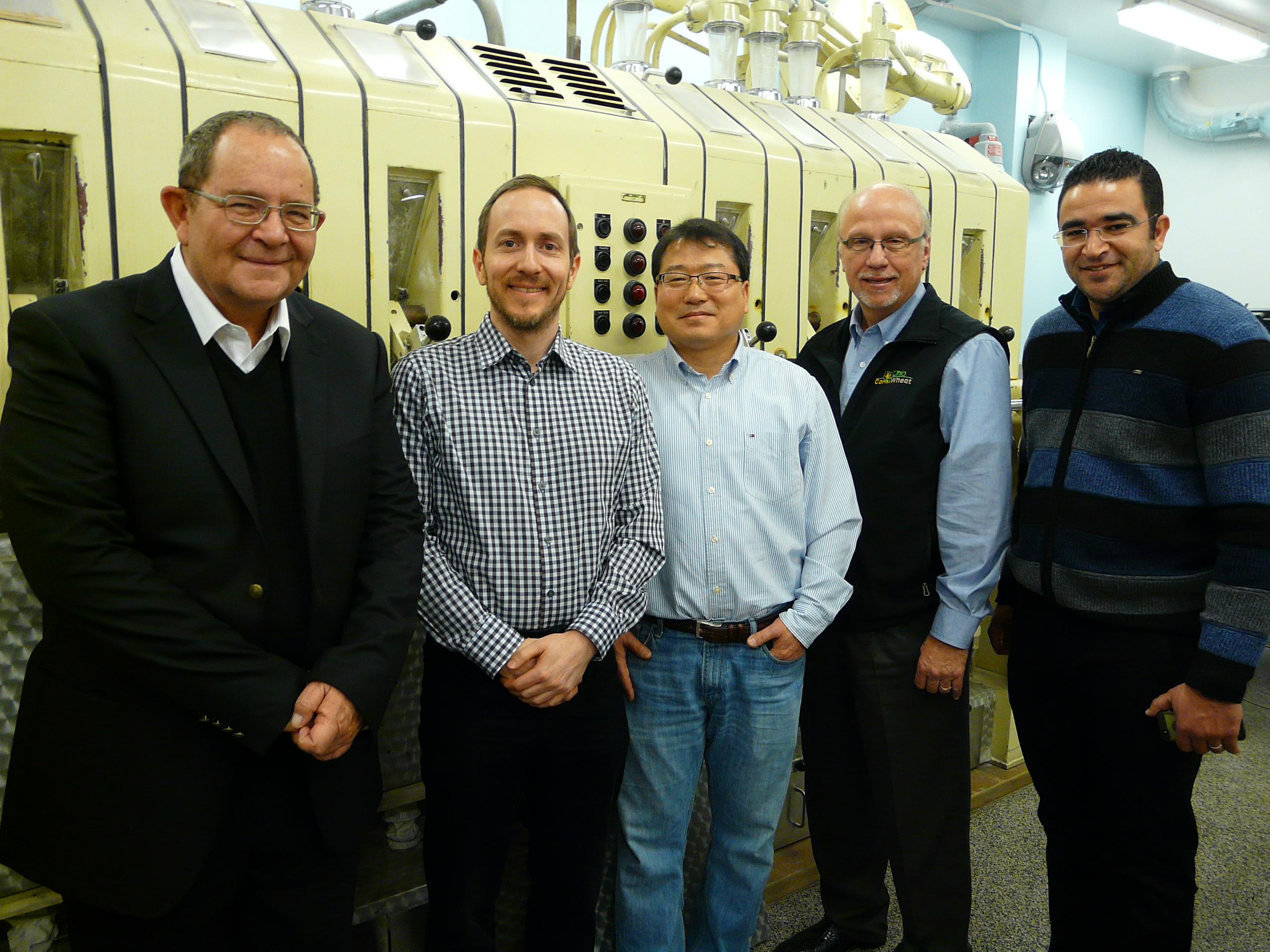 Just a thumbnail of Lloyd’s professional credentials would be enough to open that door, starting with his British father’s successful flour milling career that took him from Liverpool to Kenya, where Lloyd was born. Intrigued by his youthful visits to mills with his father, Lloyd decided to follow him into the business in 1977.

Milling engineering training and working with Henry Simon in the United Kingdom and South Africa built the foundation for Lloyd to become a mill manager in Botswana in his mid-20s. He returned to the UK with the Simon Group in an engineering sales position in 1986 that, along with his emerging knowledge of high technology applications, led to a job with the United Milling Systems division of the Carlsberg Research Center in Denmark. Lloyd eventually started his own consulting business that continued his work in Africa.

“Then, in 1991, I saw an advertisement in World Grain magazine for the post of Dean of the new Egyptian Milling School in Cairo from an organization called U.S. Wheat Associates,” Lloyd recalled. 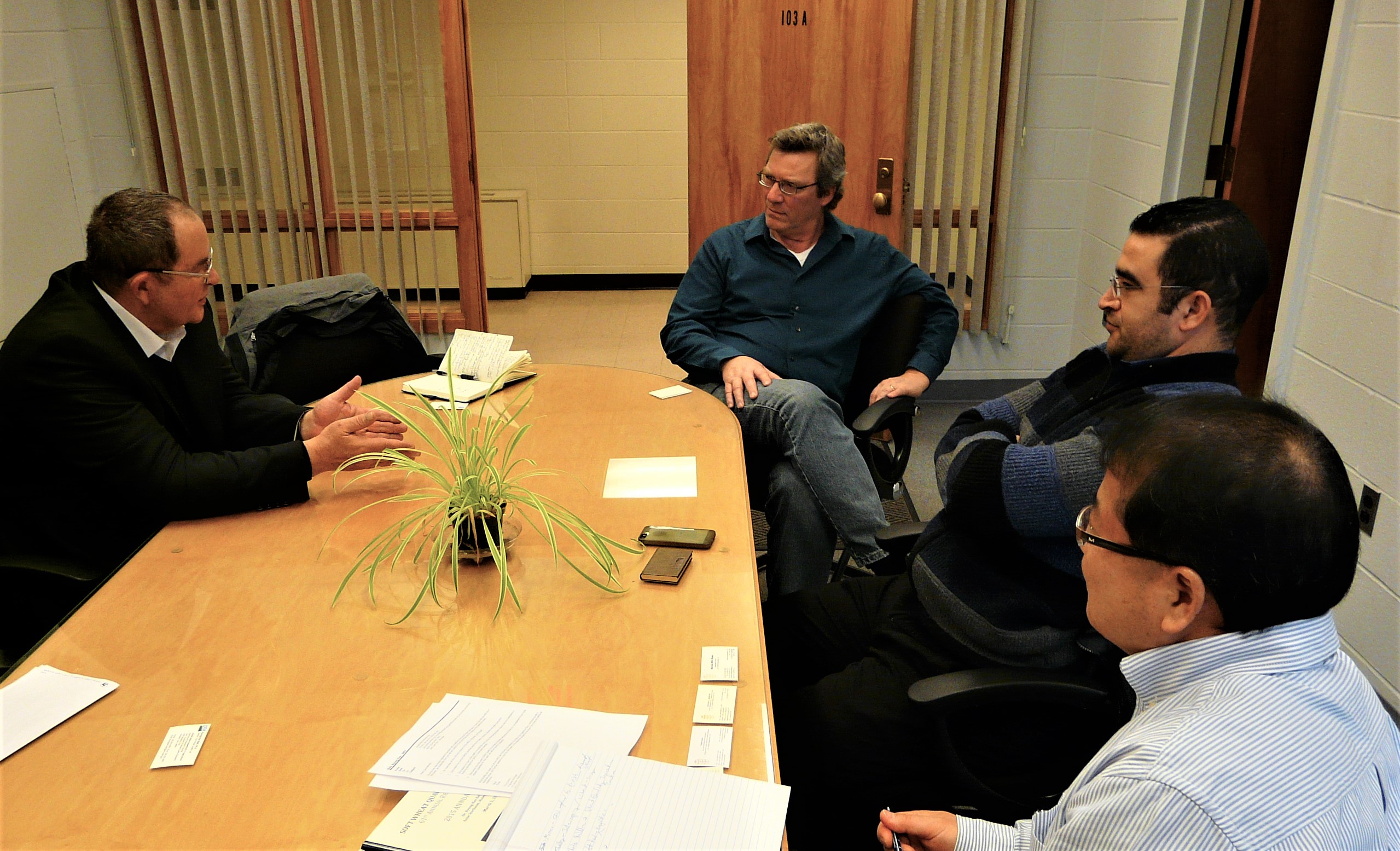 Per its agreement with its Egyptian business partners at the time, USW had management responsibilities for the school’s development and first two years of operation. Lloyd applied for and eventually earned the position where he directed construction and curriculum development — and discovered a love of teaching. Moreover, he was impressed by USW’s approach to export market development.

“Building trust is crucial, and I think USW’s biggest asset is not having sales objectives. We give advice based upon its merit only,” Lloyd observed. “From U.S. wheat farms to the school in Cairo, we were truly committed to forging a long-term partnership with overseas customers, offering technical assistance without a commercial profit motive.”

USW’s substantial funding for the school ended in 1994, and Lloyd moved on to a technical support position in Egypt with the Australian Wheat Board (AWB), which was, at the time, a fully governmental organization. After the organization was privatized, Lloyd said the drive to meet sales goals, and quarterly returns did not match his values. A return to consulting in the Middle East, including for USW, opened an opportunity to join the Wheat Marketing Center (WMC) in Portland, Ore., in 1996. 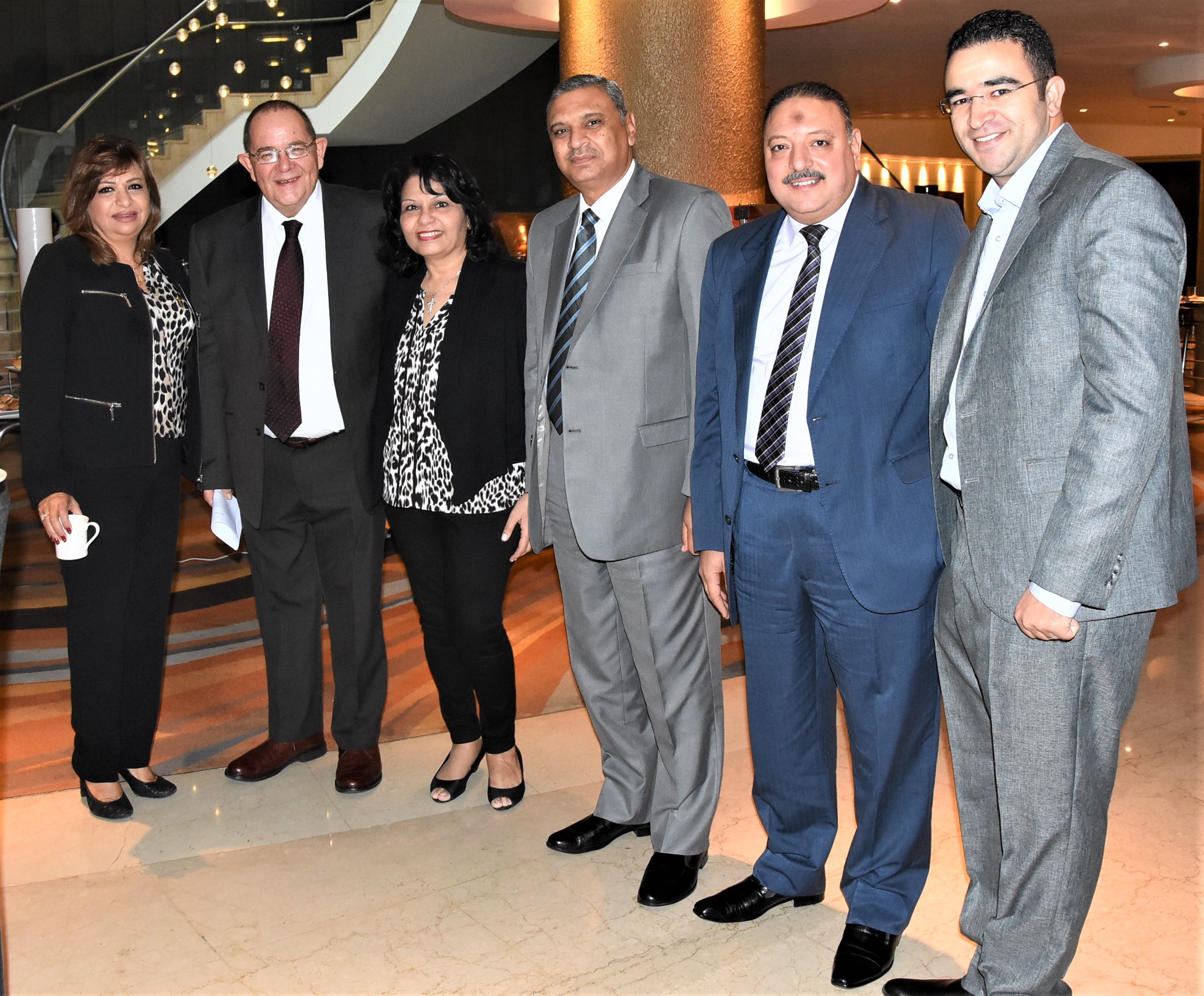 “Working with the director Bob Drynan (who had also worked for USW and the California Wheat Commission), wheat growers, the grain trade, and the researchers at USDA and Washington State University was one of the most enjoyable periods in my career,” Lloyd recalled. “Perhaps most significant in terms of my future work with USW was the interaction with Asian millers and bakers to learn about the product quality and diversity in their markets.”

After personal choices drew him back to the UK and consulting work in 1998, Lloyd answered another call from USW to help address some challenges at the new IFIM Milling School in Casablanca. That role grew into a longer-term opportunity to implement a Miller Outreach Program with the goal of building professional expertise and a greater understanding of U.S. wheat quality and value in North Africa and the Middle East through the IFIM school.

“That was very rewarding, but I recognized I needed to get reacquainted with the latest mill operations and moved to a technical milling position in Dubai for two years,” Lloyd said. “In 2005, I returned to USW to run the Tunisian Outreach Program and served in Tunis until 2009. During this time, we expanded the technical assistance role from Tunis to many of the other USW offices in Asia, the Middle East, and North Africa, as well as supporting the opening of new markets in Libya and Algeria at that time.”

Though much has changed in the last ten years, including his move to USW’s Casablanca, Morocco, office, Lloyd’s work with USW in North and South Asia, the Middle East, Africa, and occasionally Latin America and Europe in support of U.S. wheat export market development continues today.

“Our objective remains the success of the people we support,” he asserted. “Why? Because successful millers and bakers are most likely to buy what we have to offer: high-quality wheat from high-quality farmers to produce high-quality flour for high-quality products.”

The beneficiaries of his work agree.

“Peter Lloyd has been an invaluable resource for us for the better part of 10 years, giving advice ranging from mill cleanliness and fumigation to more complex topics like milling economics and flour customization,” said an executive with a large flour milling company in the Philippines. “We cannot thank him enough for all his help. He is a true encyclopedia of flour milling.” 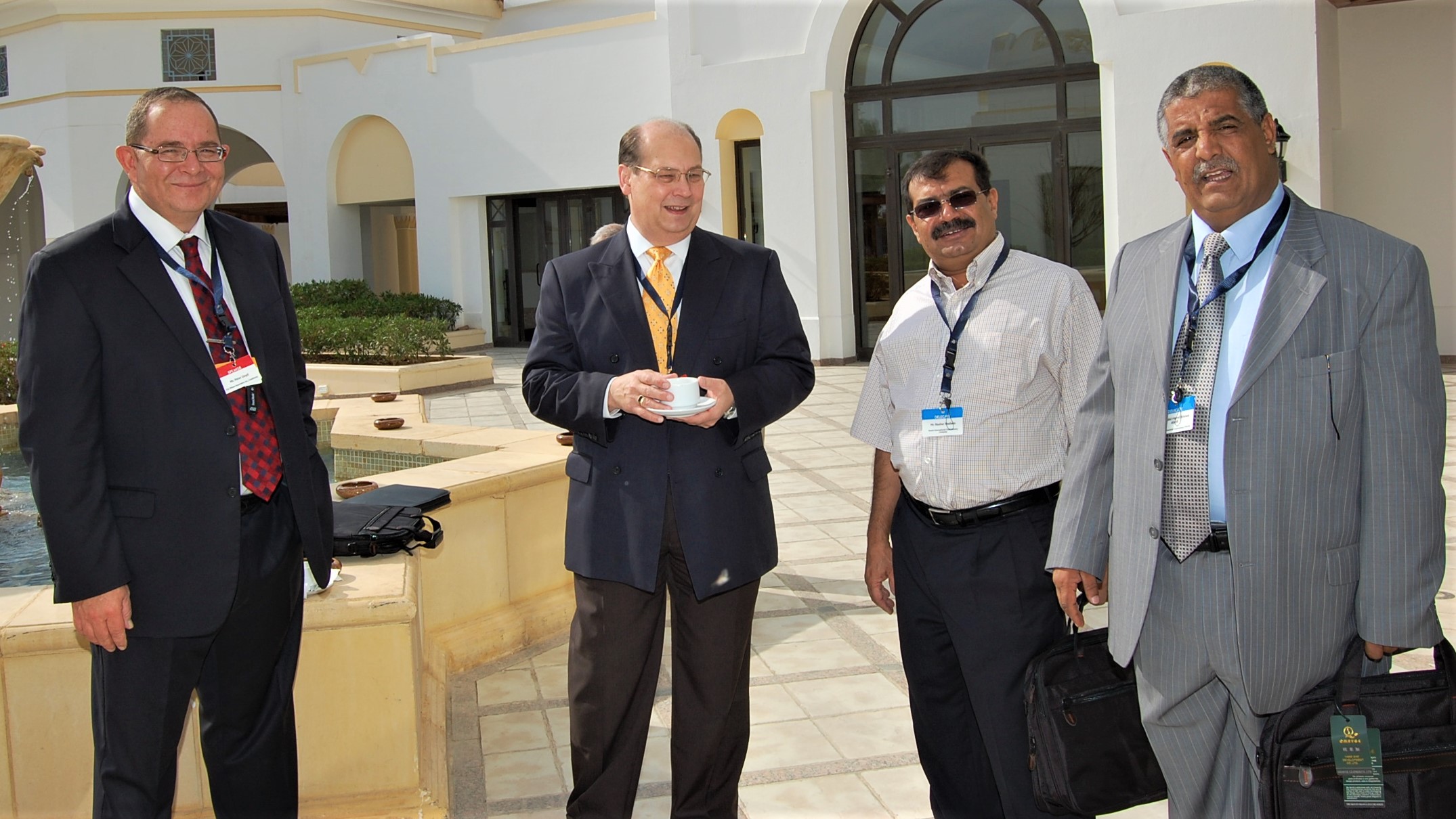 “His constructive opinions on our production process have helped us be more efficient in milling U.S. wheat and helped improve the competitiveness of our flour products,” the executive concluded.

“USW is so lucky to have such a talented, charismatic individual like Peter on our staff,” said USW Regional Vice President Ian Flagg, who directs export market development activities in North Africa, the Middle East, and Europe. “Not only is Peter a great technical asset, he is completely committed to our mission to return value to the farmers we represent and their customers, and that is what he does all over the world.”

“I am doing exactly what I want to be doing at this point in my career with and for some of the nicest people on Earth,” Lloyd said. “Our customers welcome us to their offices, listen to what we have to say, and trust us. Then coming back months later and finding that we helped them improve their business is very rewarding. And the U.S. wheat farmers we work for represent values I hold in the highest esteem: honesty, integrity, human decency, hard work, a love of the land, and a deep respect for our Creator.”

He also remains very upbeat about the global wheat industry.

“End products are made from flour, not whole wheat kernels, so the growth of the milling and food processing industries are inextricably linked,” Lloyd noted. “As much as any foodstuff, wheat-based products have a prominent place in shopping baskets in every country of the world, and for every income group for the foreseeable future — and there are more and more shoppers every day.” 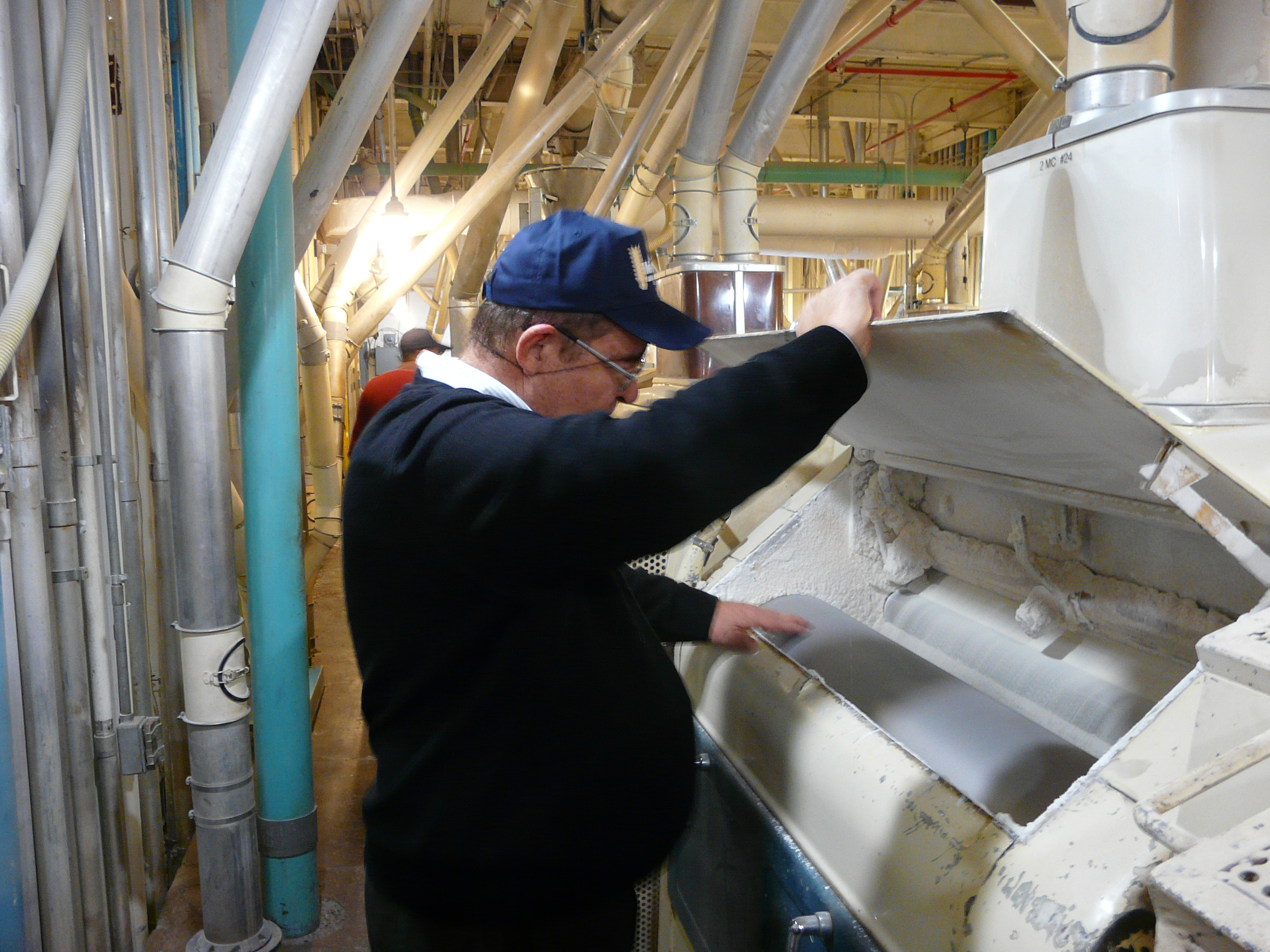 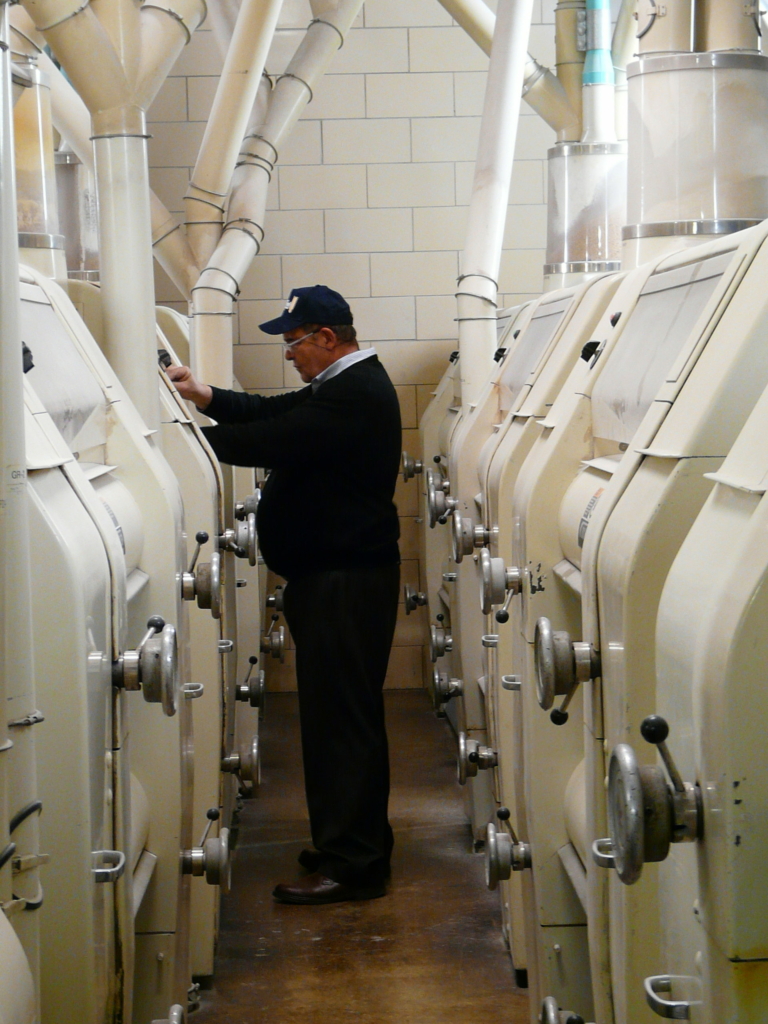 Editor’s Note: This is the second in a series of posts profiling U.S. Wheat Associates (USW) technical experts in flour milling and wheat foods production. USW Vice President of Global Technical Services Mark Fowler says technical support to overseas customers is an essential part of export market development for U.S. wheat. “Technical support adds differential value to the reliable supply of U.S. wheat,” Fowler says. “Our customers must constantly improve their products in an increasingly competitive environment. We can help them compete by demonstrating the advantages of using the right U.S. wheat class or blend of classes to produce the wide variety of wheat-based foods the world’s consumers demand.”

Ting Liu – Opening Doors in a Naturally Winning Way
Shin Hak “David” Oh – Expertise Fermented in Korean Food Culture
Tarik Gahi – ‘For a Piece of Bread, Son’
Gerry Mendoza – Born to Teach and Share His Love for Baking
Marcelo Mitre – A Love of Food and Technology that Bakes in Value and Loyalty
Ivan Goh – An Energetic Individual Born to the Food Industry
Adrian Redondo – Inspired to Help by Hard Work and a Hero
Andrés Saturno – A Family Legacy of Milling Innovation
Wei-lin Chou – Finding Harmony in the Wheat Industry