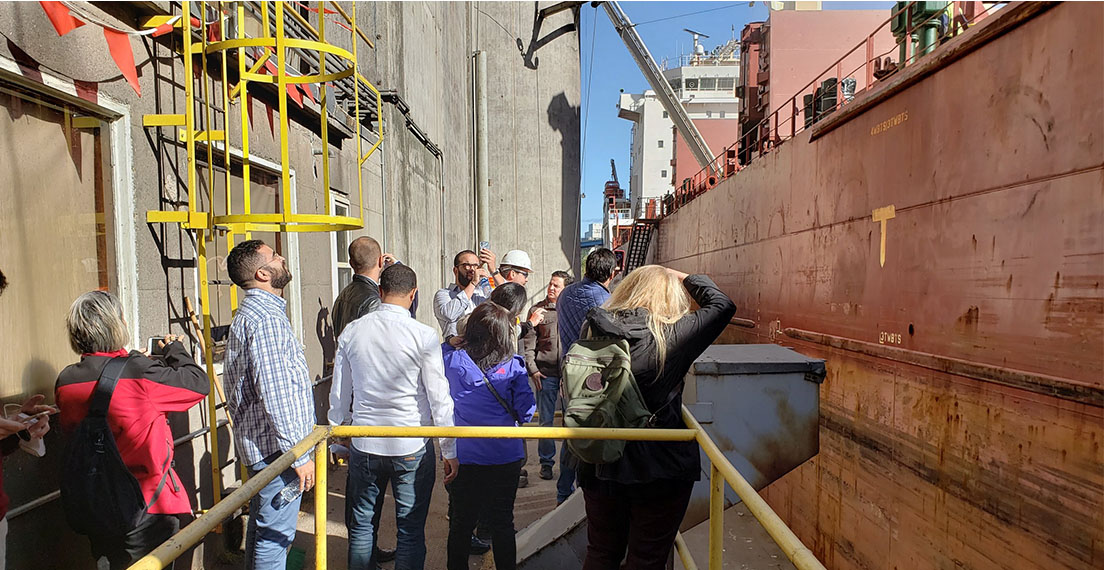 As U.S. Wheat Associates (USW) President Vince Peterson often says, at any given hour of the day there is someone, somewhere, talking about the quality, reliability and value of U.S. wheat. Wheat Letter wants to share some of the ways USW was working the past few months to promote all six classes of U.S. wheat in an ever more complex world wheat market.

The value of flour made from U.S. wheat shines in quality intensive applications that demand stability and performance. Frozen dough is just such an application. Wheat flour that may pass muster in traditional baked foods can fail when the rigors of freezing, storage, thawing and baking are involved. Moreover, in many Asian markets such as Taiwan and China, the penetration of frozen dough products is still in its early stages, so there is a great interest in discovering solutions to common problems in the production process.

To better understand the current frozen dough market in China and to meet the industry’s demands for frozen dough knowledge, USW/Beijing and USW/Taipei in 2019 invited veteran food production expert Dr. Kirk O’ Donnell of Bakers Growth, LLC, to provide technical services to selected frozen dough manufactures in Mainland China and Taiwan, and to conduct a seminar on freezing technology at the China Grain Products Research and Development Institute (CGPRDI) in Taipei. In addition to providing valuable technical support, USW was able to gain a greater understanding of this growing industry segment. 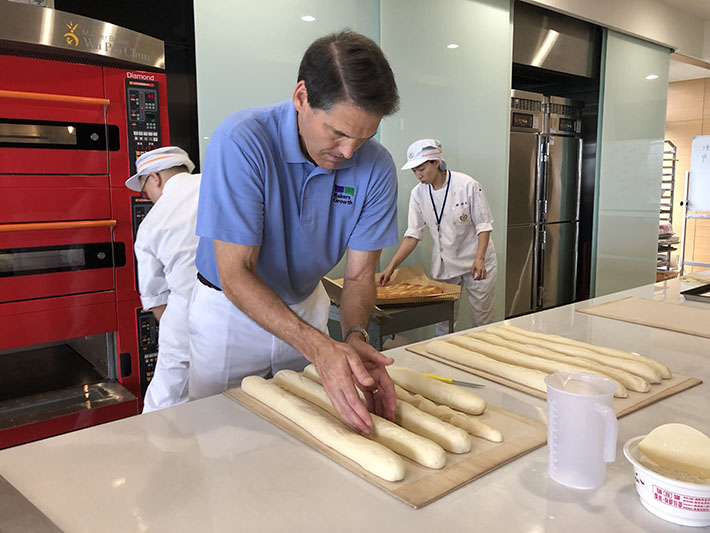 USW/Mexico colleagues and USW farmer directors were invited to the dedication of a newly constructed shuttle train facility located in Villagran, Guanajuato, Mexico. USW was proud to be among more than 300 industry leaders including Mexican wheat buyers, executives from Mexico’s Ferromex railroad, U.S. rail executives and a large contingent from the Mexican grain trade. An average of about 50 percent of roughly 3.0 million metric tons (MMT) of recent annual U.S. wheat exports to Mexico move there by rail. Even before its dedication in September, the new facility had already received nine shuttle trains of U.S. wheat including seven trains of hard red winter (HRW) and two trains of soft red winter (SRW) carrying a total of about 100,000 metric tons. 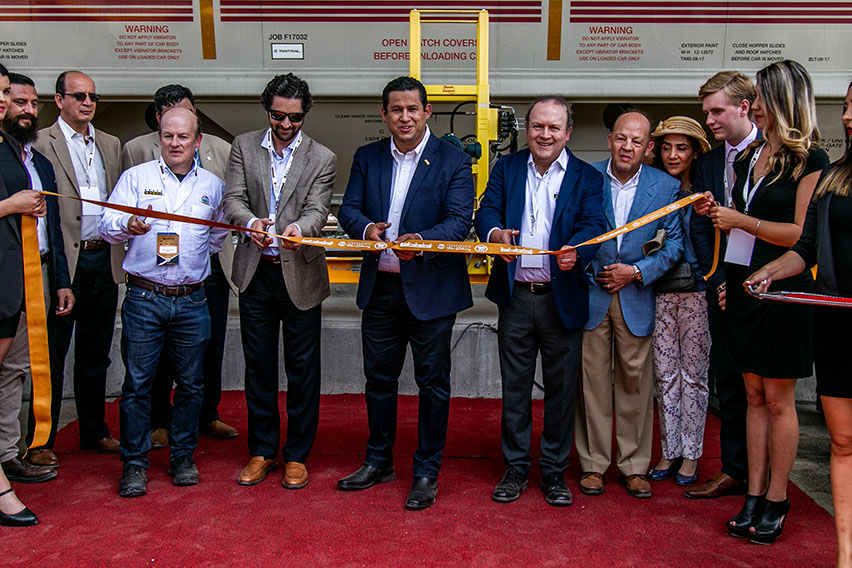 Ribbon-cutting at the dedication of the new grain shuttle train unloading facility in Mexico.

USW/Rotterdam Regional Marketing Manager Rutger Koekoek accompanied five European participants to the Northern Crop Institute (NCI) Grain Procurement Management for Importers short course. The focus was on risk management and procurement strategies for U.S. wheat importers. The participants were able to meet representatives of leading grain trading companies and, for the first time ever, were able to board a vessel being loaded with northern durum wheat at the CHS export elevator in the Port of Duluth-Superior (see photo above). Koekoek also organized meetings with NDSU’s Durum Wheat Breeder to discuss the new durum wheat varieties that have recently been released.

USW/Casablanca Milling and Baking Technologist Tarik Gahi traveled to Blida, Algeria, to meet with millers and biscuit and cake manufacturers who processed U.S. SRW wheat under a USW Quality Samples Program (QSP) funded by USDA’s Foreign Agricultural Service. The sample was milled in July and the flour was distributed to the processors. Gahi reported back that all the companies were impressed by the SRW flour quality, above all with the low water absorption and the fact that the flour performed very well without adding any chemical enzyme additives. He said the customers noted that more gluten strength would be needed for Maria-type biscuits, which, Gahi explained, can easily be managed by blending with higher protein flour such as from U.S. HRW. 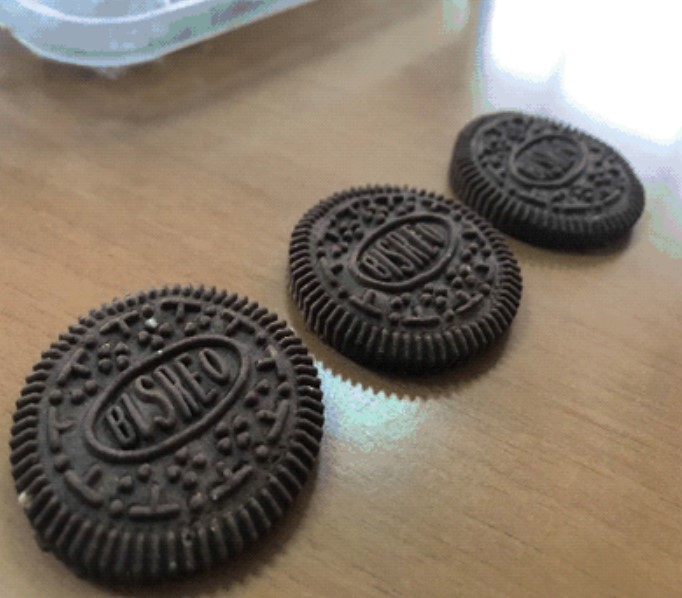 U.S. SRW wheat flour milled from a sample supplied by USW, are a key ingredient in biscuits (above), otherwise known as cookies in the United States.

USW President Vince Peterson, USW Chairman Doug Goyings, USW/Santiago Regional Director Miguel Galdos, USW/Santiago Assistant Regional Director Osvaldo Seco and USW/Santiago Technical Specialist Andres Saturno participated in the 26th ABITRIGO Congress, sponsored by the Brazilian Wheat Industry Association, near Sao Paulo, Brazil. Although USW always represents U.S. wheat farmers at this event, this delegation was particularly important given the news that Brazil’s government had agreed to fully open its tariff rate quota (TRQ) for 750,000 MT of wheat imported from outside the Mercosur trade agreement. In a few past years when Brazil opened the TRQ because of limited Mercosur supplies, U.S. wheat represented most of the import volume. At the meeting, the industry was informed that the TRQ would be opened late in 2019, rather than the expected timing of later in 2020.