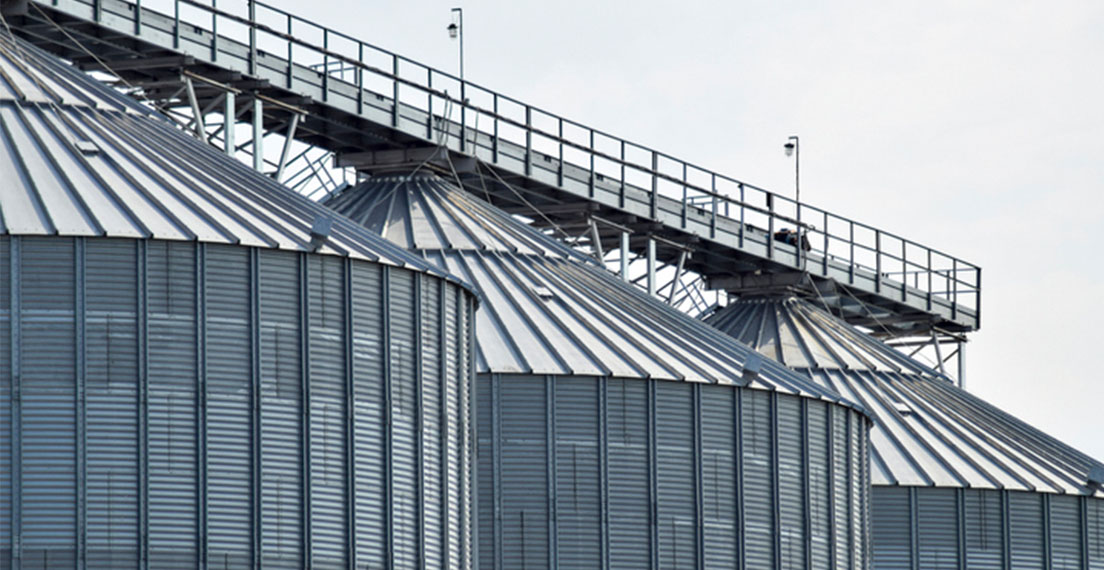 Marketing year 2021/22 (June to May) has been record-setting to date. USDA estimates of global production, trade, and consumption have all outpaced previous years. However, since it’s initial 2021/22 World Agricultural Supply and Demand Estimates (WASDE), USDA has adjusted its forecast down, led by a 17 million metric ton (MMT) reduction in global wheat production by December. Ending stock estimates for the world’s top exporters are also down.

The weather has played a key role this year in lowering production in Canada, Russia, and the United States. Quality concerns following wet harvests in the EU and Australia have affected milling-quality wheat and supported markets. And Russia’s use of an export tax and now plans for an export cap have tightened supply while adding to prices. Other factors, including ballooning ocean freight rates, natural disasters, Covid-19 restrictions, and smaller domestic production in some key countries, have helped prices climb to multi-year highs (see chart below). 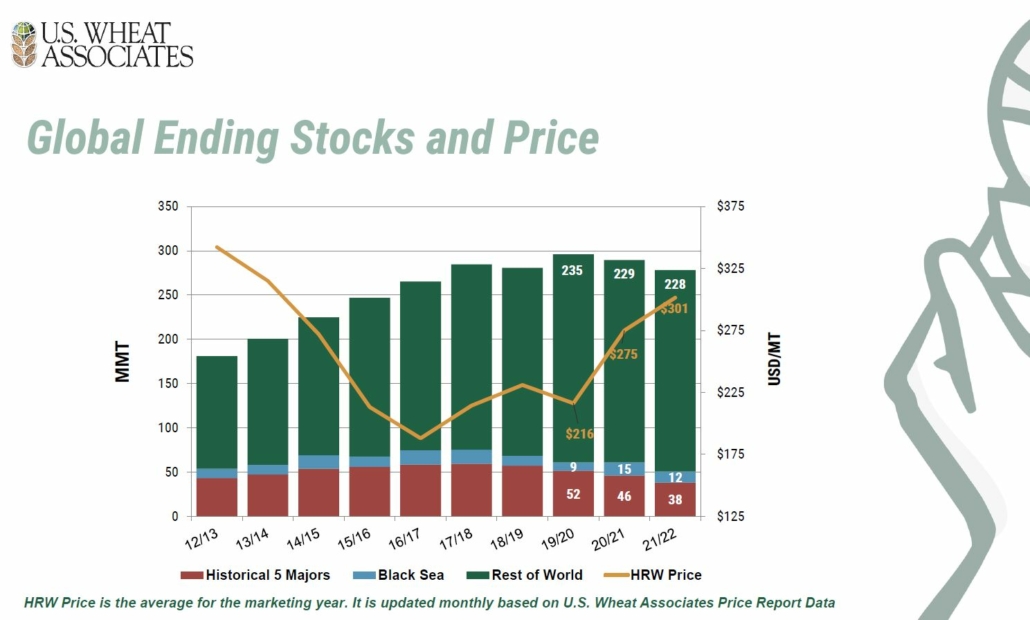 Lower stocks and higher prices dominated the first half of the wheat marketing year 2021/22. USDA steadily reduced its global production estimates from June to December mainly from some large exporting countries. Given record world wheat use, the 2021/22 average export price to date for ordinary U.S. hard red winter wheat from the Gulf ($301/MT, above) reflects the situation. Sources: USDA and USW Price Report.

As U.S. Wheat Associates (USW) marks the middle of the 2021/22 export calendar, the following are snapshots of the influential factors for major wheat exporters and how USDA estimates have changed.

Weather was a strong factor this growing season for Canadian wheat. In the Prairie Provinces, the Normalized Difference Vegetation Index (NDVI), which measures plant health, had the wheat crop maturing four weeks earlier than normal. Hot and dry weather withered the all-wheat estimate to 21.65 MMT, down 33.5% compared to the 5-year average. StatsCan’s wheat estimate of 21.6 MMT is the lowest all-wheat production since 2007. Durum production took an even steeper cut to 2.7 MMT, the lowest ever recorded for the country. Exports are also projected lower. The latest WASDE report forecast Canadian wheat exports to total 15 MMT, 43% less than last year. Year-to-date, Canadian wheat exports are running 38% behind 2020.

The South Pacific country continues to rebound from a drought-ravaged 2019/20 crop with expectations for a second bumper crop in a row. The latest WASDE report put Australian wheat production at 34 MMT, 8% higher than November’s report and 41% higher than the 5-year average. Exports too were projected higher at 25.5 MMT. Data on quality is still unknown because the Australian crop is in mid-harvest. However, wet weather has led to concern about the final volume wheat that meets milling quality standards.

Russian wheat production has been on a downward slope since June when USDA estimates of production stood at 86 MMT. The latest string of WASDE reports have cut that estimate to 75.5 MMT with 36 MMT forecast for export. Year-to-date, Russia has exported 19.4 MMT of wheat, 54% of the overall estimate despite a wheat export tax that increased to $91/MT on Dec. 10, more than double in the rate last July. On top of the fluctuating export tax, Russia is considering a wheat export quota set to begin in mid-February.

The Black Sea country has had an impressive production year, up 30% year-on-year, and exports running 17% ahead of last year’s pace at 14.5 MMT. Ukraine’s agriculture ministry signed an agreement with grain traders capping wheat exports at 25.3 MMT, about 1 MMT higher than the latest WASDE’s export projection.

The EU also saw higher production this year than last, driven mostly by impressive yields in Romania and Bulgaria. Exports are running 11% ahead of last year’s pace and the EU is expected to replace Russia as the year’s leading wheat exporter. Coceral, a European trade association, forecast that the 2022 soft wheat crop will drop to 125.4 MMT, 3.4 MMT less than their 2021 figure despite the area planted being only marginally reduced. Yields however are estimated to be down 3%.

The Buenos Aires Grains Exchange (BAGE) expects the biggest wheat harvest ever for the South American country. Higher than anticipated yields have traders estimating a 22.1 MMT wheat crop, higher than USDA’s estimate of 20 MMT. Even so, the government has taken steps to discourage the pace of export license registrations.

As wheat prices continue to rise, major wheat importers are outpacing their purchases compared to 2020/21 (see chart below). For example, Egypt made its largest single purchase of wheat ever this year, buying 600,000 MT and paid $90/MT more than the average price paid a year ago. Iran’s wheat imports are up 218% compared to last year, while Turkey’s import demand is up 36%. 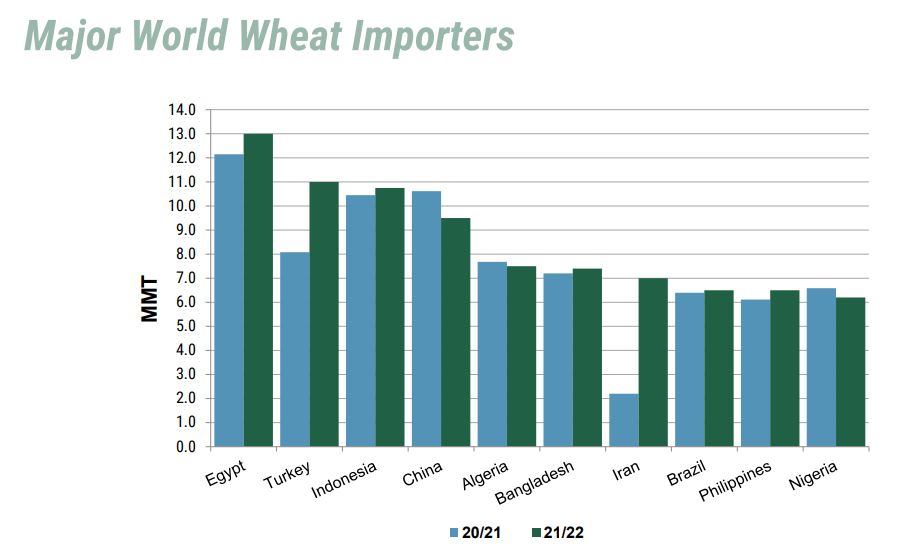 Looking ahead to the second half of 2021/22, many analysts see little change in ending stocks but continued market volatility given the many unknown factors in the global economy including logistical challenges and pandemic uncertainty.  Producers and buyers now look to the potential for increased wheat acres (USDA forecasts a 5% increase in 2021/22) and better growing conditions to help add stability to the global wheat market in 2022/23.

Latin America is facing great challenges, with extreme poverty and hunger being some of the…
END_OF_DOCUMENT_TOKEN_TO_BE_REPLACED
https://www.uswheat.org/wp-content/uploads/MOA-Logos.png 498 1157 Steve Mercer https://www.uswheat.org/wp-content/uploads/USW-Logo-Full-Color.png Steve Mercer2022-11-18 17:02:122022-11-18 17:02:12USW, Other U.S. Export Organizations to Collaborate in South America on Nutrition and Food Security Activities 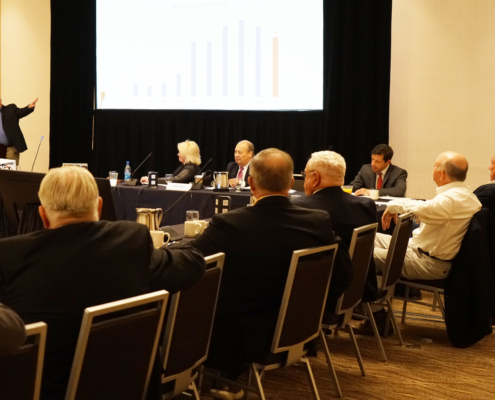