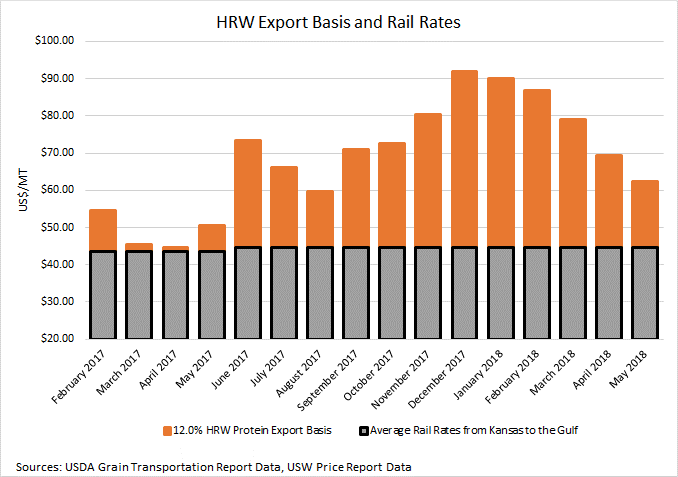 Since the beginning of the calendar year, export cash prices for hard red winter (HRW) wheat prices have rallied an average 73 cents at the Gulf across all protein levels. However, export cash prices are made up of two components — wheat futures and export basis. Most of the export price rally matches the futures market, which climbed from $4.37 per bushel in January to $5.64 per bushel on May 25. However, U.S. Wheat Associates (USW) and the farmers it represents also face historically high rail rates that support the export basis.

The futures rally is based on two fundamental factors — drought in the U.S. HRW-growing area, which is shrinking the U.S. HRW supply, and concern about poor crop conditions around the world, which the market believes is increasing potential demand for U.S. HRW.

On May 10, USDA forecast global world wheat consumption to outpace global wheat production in 2018/19 for the first time since 2012/13 due to reduced production in Russia, Ukraine and Kazakhstan. The growing demand for wheat around the world and the expectation of smaller Black Sea supplies are pushing up U.S. export prices.

As of May 31, the U.S. Drought Monitor reported that the Oklahoma and Texas panhandles and 75 percent of Kansas are still in a moderate to exceptional drought. The corresponding wheat condition ratings reflect the effects: USDA rated 48 percent, 63 percent, and 54 percent of HRW in poor or very poor condition, respectively, in the region.

However, while the weather fundamentals are dominating the news, there is also a third factor that is quietly playing a role in U.S. export prices — increased U.S. rail rates. According to USDA/Agricultural Marketing Service Grain Transportation Report data, year-to-date in 2018, the average cost of railcar transportation for wheat from Kansas to the Gulf is $45 per MT ($1.21 per bushel). That is the highest level since USDA began tracking rail rates in 2010. Rail rates for wheat will increase to a new record high this summer according to notices that went out to customers in March and April.

Rail rates are a key component of export basis, which also includes elevation, barge freight and labor costs. Yet the cost of transporting wheat is shared by the farmer and the overseas customer through country elevator basis levels and export basis levels. Consequently, higher rail rates act as both a ceiling for farm gate prices and simultaneously as a floor for export prices.

As customers ride out the market volatility that always occurs this time of year, they should keep in mind that U.S. export basis levels are supported by increased transportation costs, and the 2018/19 global stocks to use ratio without China is forecast at a tight 20 percent as noted in the USW May 17 Wheat Letter article “Chinese Wheat Stocks Mask Tight Stocks to Use Ratio.”