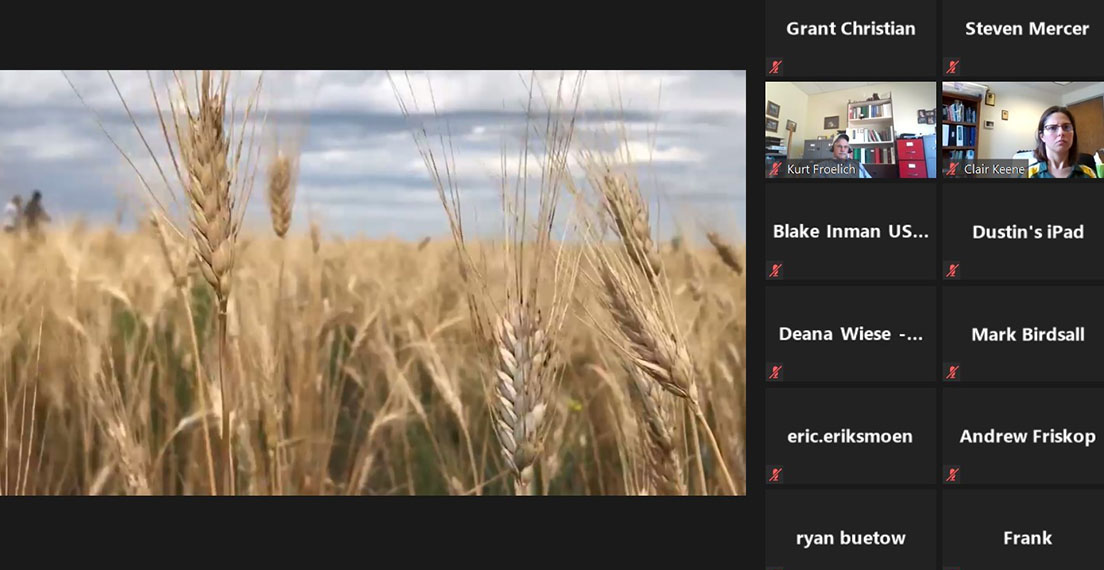 More than 60 participants heard first-hand accounts about what is expected to be a larger crop by about 12 percent compared to 2019, mainly from increased planted area. Yield and quality likely will vary because early planted fields in North Dakota did not get rain at the ideal time for growth and tillering, while later planted fields caught rain in late June into mid-July at the right time for development. Precipitation across Montana’s western durum production region was more timely and yield potential is expected to be more consistent there.

“USDA’s current forecast for North Dakota is 42.8 bushels per acre, which is above the trend line but less than in 2019,” said Jim Peterson, NDWC Policy and Marketing Director. “Production is estimated now at 62 million bushels, or 1.69 million metric tons, in the state.”

Sam Anderson, Industry Analyst and Marketing Coordinator with the Montana Wheat and Barley Committee, told the participants that farmers there are generally very pleased with their northern durum crops.

“There was more durum and hard red spring wheat seeded because of the extremely wet conditions last fall that kept farmers from putting in hard red winter wheat,” Anderson said. “As of Aug. 1, the average yield forecast is 38.0 bushels per acre, which would put the total production estimate in the state at 22.42 million bushels,” or more than 610,000 metric tons.

Farmers from across North Dakota also reported from their own fields. Mark Birdsall farms in Ward County and showed some later-seeded durum that has “a really good stand … tall with heavy heads,” that is about 3 weeks from maturity. His grandson Owen held plants from the field that stood close to his height of 5 feet (1.524 meters).

Blake Inman of Berthold, N.D., is USDGA’s President this year, and noted that his durum looked good, particularly the later-seeded fields. He expects to start his harvest in about 3 weeks but was somewhat concerned about variable maturity and late season weed growth that could cause challenges at harvest.

Adam Carney farms in Montana’s “Platinum Square,” as the northeast corner of the state is called. With plenty of timely rains, he says his durum “should provide a nice yield and quality.”

The northern durum harvest is currently underway and is a bit more advanced in Montana. U.S. Wheat Associates (USW) will soon begin reporting on northern durum quality as samples are collected and analyzed for USW’s 2020 Harvest Report.