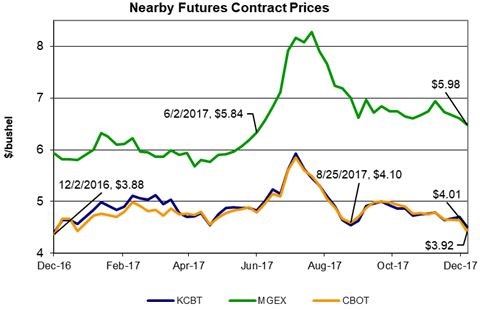 The record large global wheat production has pressured U.S. wheat futures to six and twelve-month lows. Since the beginning of the 2017/18 marketing year, the Chicago Board of Trade (CBOT) soft red winter (SRW) wheat futures and the Kansas City Board of Trade (KCBT) hard red winter (HRW) wheat futures have fallen 37 cents and 32 cents, respectively to levels not seen since last December. The Minneapolis Grain Exchange (MGEX) hard red spring (HRS) wheat futures climbed in July, supported by concerns over severe drought in the U.S. Northern Plains, but has since fallen to within 14 cents of the June 2 price. This decline in wheat futures prices represents a significant opportunity for customers to lock in low futures values to hedge the risk of growing protein premiums due to the tight global supply of high protein wheat.

The USDA report also noted that lower year over year wheat production for 2017/18 was reported in Canada, Kazakhstan, Ukraine and the United States, and is also expected in Australia. This is important for customers needing high protein wheat, because nearly all the world’s high protein wheat exports (13 percent protein on a 12 percent moisture basis (mb) or higher) originate from those five countries plus Russia.

With global high protein wheat supplies shrinking for the second consecutive year and demand continuing to be strong, the premium between MGEX and KCBT wheat futures has continued to widen. In 2016/17, the inter-market spread between MGEX and KCBT averaged $1.05 compared to just 40 cents the prior marketing year. Year to date in 2017/18, the MGEX to KCBT spread averages $2.09.

Despite the increased premiums for high protein HRW and HRS, a review of USDA Federal Grain Inspection Service (FGIS) data reveals an increased percentage of high protein exports. Seventy-seven percent of 2017/18 HRS exports have at least 14 percent protein (12 percent mb), compared to the 5-year average of 70 percent. The percentage of HRW exports of 13 percent protein and above (12 percent mb) is double the 5-year average.

With six months left in the marketing year, many customers are securing their high protein wheat demands for the year. While premiums for high protein continue to grow, U.S. wheat futures markets have fallen for four straight weeks, which offers a good opportunity for customers to lock in the lowest HRS futures prices seen since June and the lowest SRW and HRW futures prices since last December.

Please call your local U.S. Wheat Associates (USW) representative if you have any questions about the U.S. wheat marketing system or U.S. wheat supply.