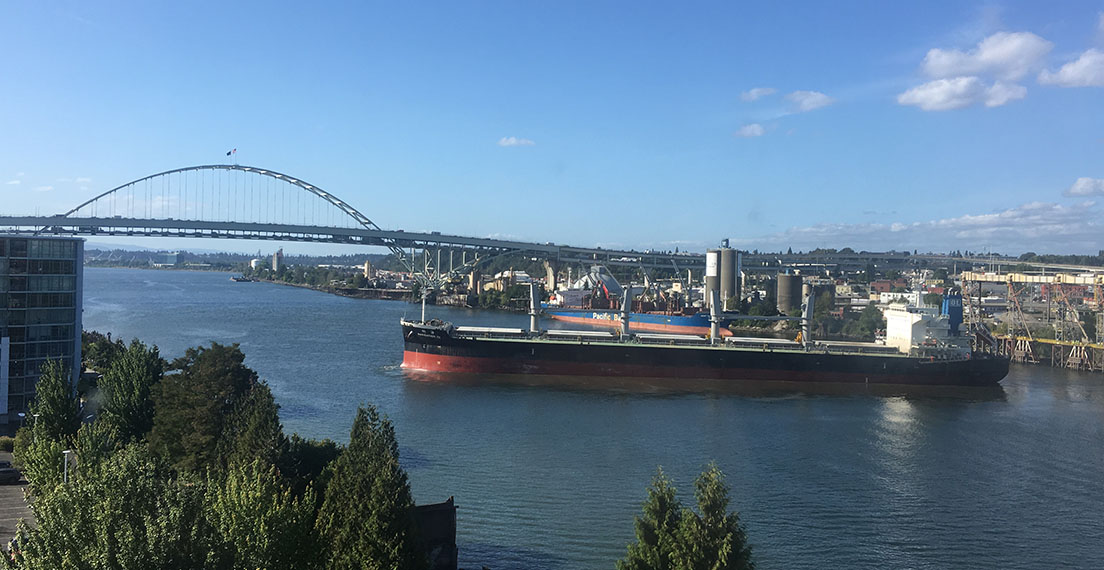 Early in 2019, I attended a presentation given by the Executive Director of the Pacific Northwest Waterways Association (PNWA), Kristin Meira. In the audience were farmers eager to hear how U.S. legislators shared their interests regarding the ongoing navigability of the Columbia Snake River System. Open waterways are a crucial and efficient source for U.S. farmers to export their products to international markets.

The Columbia Snake River System is the leading gateway for wheat exports. The Columbia Rive alone barges 53% of U.S. wheat destined for export. The rivers can move more volume at once, with greater fuel efficiency, making them more effective for moving grain to market than by rail or truck. One barge can carry the same amount as 35 rail cars or 134 18-wheelers. A barge tow can carry more than one 100-unit train or 538 trucks. One barge can move a ton of wheat 647 miles per gallon while a truck can only move a ton of wheat 145 miles per gallon

A Voice for the River System

The PNWA is an active voice in promoting the benefits of keeping the river systems open for navigation. In their own words, the PNWA is a collaboration of ports, businesses, public agencies and individuals who combine their economic and political strength in support of navigation, energy, trade and economic development throughout the Pacific Northwest (PNW). The organization’s history dates back to the projects of the New Deal in 1934. The group, known then as the Inland Empire Waterways Association, petitioned President Roosevelt to fund a navigation lock along the Columbia River just east of Portland, Ore.

Since then, the PNWA has been a leader in securing Congressional authorization for the necessary funds to build another seven locks and dams along both the Snake and Columbia River. The PNWA also works hard to maintain and improve navigability. They advocate for deepening the draft and improving the jetties that allow safe passage into the Columbia River.

The importance of the river system is not lost on the farming community. However, balancing the interests of environmental groups is difficult. Save Our Wild Salmon, an organization with the goal of increasing PNW wild salmon and steelhead populations, advocates for the removal of dams on the Snake River and expanded spillways on the remaining dams. They also want to modernize the Columbia River Treaty with Canada. These changes would include the river’s health as an equal portion of the treaty, which currently only governs energy production and flood management.

Many groups do not place value on the beneficial role that the dams have regarding grain transportation and clean renewable energy. The four dams on the Snake River power up to 800,000 homes while producing zero carbon emissions. Instead, environmental groups focus their argument on enhancing the railroad as a replacement for barge grain transportation. This tactic would take billions of dollars in infrastructure upgrades and would not be as efficient or as environmentally friendly

The value of the Columbia Snake River System as a transport hub from farm to market is the link necessary to connect the United States to its trading partners. The river system keeps U.S. wheat competitive by moving higher volumes at more efficient prices. The wheat associations that make up the tri-state region of Idaho, Oregon and Washington all support, through their PNWA membership and resolutions,  the ongoing navigability of the rivers system. There will continue to be controversy surrounding the river system and the rich ecosystem that they sustain. The shared interest between farmers, sportsmen, environmentalists, scientists and commerce are diverse. An organization like PNWA, which has spent more than 80 years advocating for an open river system, is the key to keeping it open for decades to come.